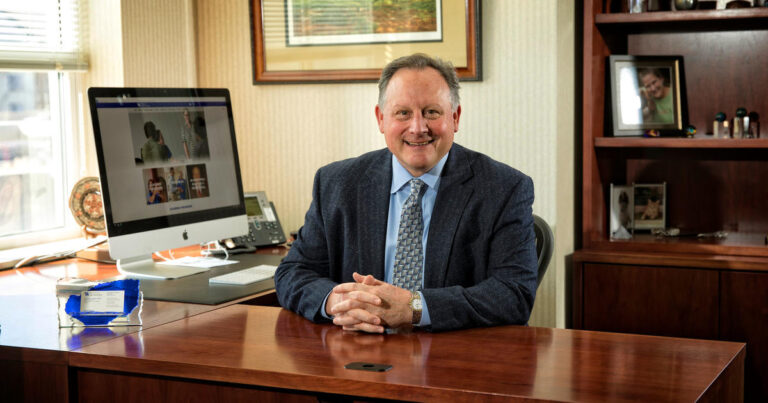 The proof is in the fact that the original paper is still being cited — more than 500 times, in fact, since it was originally published in the American Journal of Sports Medicine in 1997. But it’s also still earning recognition. Titled “The Role of Proprioception in the Management and Rehabilitation of Athletic Injuries,” the paper was recently honored by the journal for being the most cited published that year.

As part of their 50-year anniversary celebration as a journal, the AJSM is currently promoting top-cited articles over the past 50 years.

Scott Lephart, Ph.D., dean of the University of Kentucky College of Health Sciences, was highlighted because he was the primary author of the most cited paper published in 1997 (along with Danny M. Pincivero; Jorge L. Giraldo, M.D.; and Freddie H. Fu, M.D.). As such, the journal asked Lephart to provide a 10-minute presentation discussing his article, which they then posted on YouTube and Facebook.

At the time, Lephart was serving as director of the Neuromuscular Research Laboratory (NMRL) at the University of Pittsburgh, as well as chairman of the University of Pittsburgh School of Health and Rehabilitation Sciences’ (SHRH) Department of Sports Medicine and Nutrition. Lephart joined UK’s College of Health Sciences as dean in March 2015. He also serves as a professor and endowed chair of orthopaedic research, and is the founder of the Sports Medicine Research Institute at UK.

“This is a significant recognition because the American Journal of Sports Medicine is the highest-ranking journal in the sports science field,” said Kyle Kosik, Ph.D., and an assistant research professor in UK’s Department of Athletic Training.

But why do the paper and studies continue to be so influential?

“Being recognized for the top cited AJSM article in 1997 is a big deal, and a well-deserved honor,” he said. “Dr. Lephart’s trailblazing research in the area of joint proprioception in the 1990s led to less invasive, and in many cases, more practical approaches to treating joint injuries. This paper served as a foundation for a series of important studies over the next two decades, whose findings underscored the importance of training the dynamic stabilizers to improve joint stability and help mitigate the risk of ligamentous injury.”

Guskiewicz said he was not surprised to learn that Lephart’s paper was cited so many times.

“I learned a lot from Dr. Lephart during those early years of my research career,” he said. “Most importantly, he taught me how to develop sound clinical research studies with relevance to clinical practice. He inspired me to go on to pursue my doctoral degree and to continue asking and answering important research questions to help improve safety in sports.”

Before publishing this paper in 1997, Lephart’s work gained national attention when he received the Charles S. Neer Award for Outstanding Basic Science Research from the American Shoulder and Elbow Surgeons Society.

He said the AJSM recognition is an honor, but one that the entire team shares.

“It does continue to validate the work and the effort,” Lephart said. “In the early 1990s our research group, predominantly myself and Dr. Fu, began studying the role of proprioception and neuromuscular control as it contributed to joint stability — both in the prevention of capsuloligamentous structure injuries in predominantly the shoulder, knee and ankle, and the role of injury and surgery and rehabilitation to restore that mechanism. It was our impression that the scientific community did not have a thorough understanding of the sensory motor role of capsuloligamentous structures as it related to joint stability.”

In the video, Lephart answered questions like, What would he do differently in the study and what advice would he give to future authors on the topic. Another question discussed the impact of the paper.

“The biggest impact was pulling all of the sports medicine team together with a general understanding that there’s a significant dynamic component to joint stability that needs to be considered,” Lephart said. “We felt that it was important that the community had a thorough understanding of proprioception as it related to management and rehabilitation of athletic injuries in all joints, and this was really the motivation for us to publish the first paper in the American Journal of Sports Medicine in 1997, providing an overview of some strategies for the restoration of the dynamic muscular mechanism and neuromuscular control of the joint, and ultimately resulting in widespread citations of this work.”