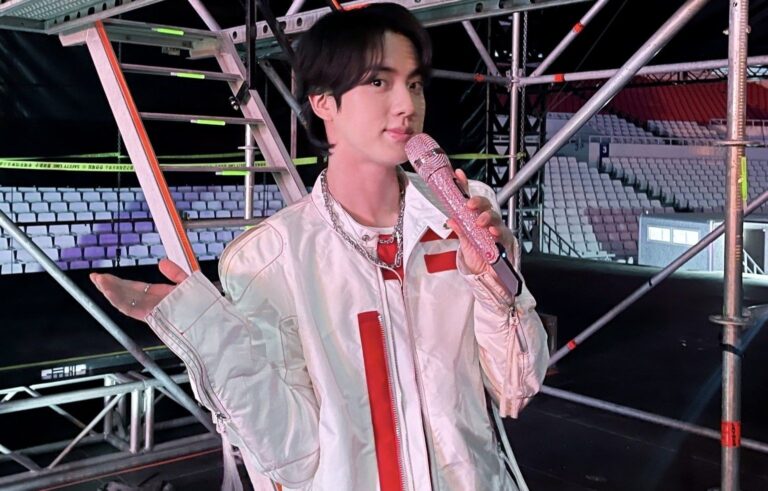 Creating and innovating savage remarks in fleeting moments is not a child’s play, yet BTS’ Jin makes it look effortless. From roasting his fellow members to giving hilarious replies to ARMYs, he is the savage king of the seven-member group.

While several K-pop idols may hesitate to give witty responses because they worry that it might land them in trouble, BTS’ Jin is unconcerned with this notion.

The Epiphany singer loves to stay in the center of the limelight and rightly so. With his amazing visuals and mesmerizing vocals, there is not a single reason why he shouldn’t be the life of every party. To add to the already fierce personality, his savage and funny comments further pave the way to perfection.

Let’s take a look at some of the moments that signified the savage persona BTS’ Jin carries with him at all times.

1) Reminded the maknae of his hyung status

jungkook was like “jin hyung-” but jin didn’t even let him finish and said “I don’t want to hear any nonsense” then ignored him skdjsks rippp 😭 THE SILENCE BEFORE JUNGKOOK LEFT PLEASE DJSKJDK HE’S SO SAVAGE https://t.co/WuqArpepqL

BTS’ Jin does not need a full conversation to come up with the wittiest remarks and his response to Jung Kook is proof enough.

In one of the scenes from ‘As I Told You’ special stage Bangtan Bomb video, BTS’ Jin and SUGA were using the elevator as a mirror to check their choreography for the 2016 MBC Korean Music Festival.

The maknae had something to say to Jin and therefore called out his name. Little did he know about the savage response he was inviting in for himself. Jin straightaway said,

“I don’t want to hear any nonsense.”

2) The existence of the globally-renowned members declared “funny”

In Run BTS! episode 110, BTS members were given the task of blowing a tissue. If the combined time of members for which they can sustain the tissue in mid-air with their blows crosses one minute, they would be declared winners.

Upon Jin’s turn members started hyping him up and made him laugh even before he could start. Shutting down the praise, he told them to stop making him laugh. BTS’ Jin said,

“Stop talking. Your existence is funny.”

The “World Wide Handsome” is beauty personified, and not just for fans but for himself as well. In a Vlive session dated February 19, 2017, BTS’ Jin was sharing his thoughts on the Face Photo collection, flipping through each member’s pages. While showing V‘s pictures, Jin’s savage remarks made AMRYs laugh out loud.

“I know V looks like he might be better looking than me but it’s just an illusion. He is really handsome but he thinks that I am a little more handsome.”

In the August 2021 segment by WIRED ‘BTS answer the WEB’s most searched questions,’ members answered exciting and interesting questions. From discussing their spice tolerance to sharing their views on inducting a new member into the group, they stirred up things fun and light.

Adding to the fun game segment, the Epiphany singer found the perfect opportunity to leave his mark. In a question asking whether members of the globally-renowned group can “come to a birthday party,” BTS’ Jin outrightly rejected the request in the most playful manner.

Probably Seokjin wanna WARN James that they know everything abt what he did/said! so dont mess with us and then start to giving excuse

JIN said *they take rest by- watch papa mochi video*Probably Seokjin wanna WARN James that they know everything abt what he did/said! so dont mess with us and then start to giving excuse 😴🤣Ahh Savage 🔥#JIN #BTSJIN #SEOKJIN #YOURS @BTS_twt https://t.co/UNbedyGL5r

The host of the talk show, The Late Late Show, James Corden, was in “hot water” with the ARMYs because of his remarks on the fandom. He called referred to BTS fans as “15-year-old girls,” which landed him in huge trouble.

However, BTS’ Jin’s subtle comments on his show were a direct hit on Corden. On being asked how members manage to rest and relax with such hectic schedules, the savage king’s sarcastic and savage response made fans love him even more.

6) Targeted his employers on the savage-radar

K-pop idols are subject to extremely rigid norms and regulations, and failure in the implementation of which can land them in chaos. From carving out strict diet plans to restricting their opinions, they have not reflected the best of their image to the public in this aspect.

However, BTS’ Jin has not left his agency off his savage radar. In a VLive session with Jimin, the eldest expressed his desire to make the session a ‘drinking broadcast’. Jimin, however, told him that the agency staff might not be in favor of the idea and Jin’s response to that reminded fans of the savage person he is.

This was not the first time BTS’ Jin broke Bighit rules. He chopped and also dyed his hair by himself even when the staff opposed it. Additionally, on other occasions, he also called out the respective authorities for regulating their diets and framing extraordinarily difficult choreographies.