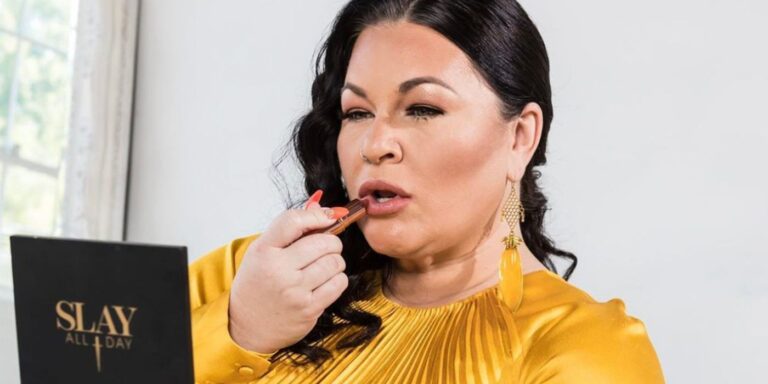 On Instagram, the 90 Day Fiancé star Molly Hopkins gets criticized for her fashion choices after weight loss. Fans remember Georgia woman Molly from 90DF season 5, and she notably married Luis Mendes on the show. Her first relationship was a major disaster, but she didn’t give up hope, and found love on 90 Day: The Single Life with Brooklyn cop, Kelly Brown. As her love life took an inspiring turn, Molly made the decision to shed some unwanted pounds. So far, Molly has thrilled thousands of 90 Day Fiancé fans by losing over 24 pounds.

Molly first opened up about her weight loss journey in June 2021. She posted before and after photos to show off the weight loss in her face and body. The 46-year-old LiviRae Lingerie owner Molly has revealed that she tried every “slim down” quick fix in the book, and shared that what eventually worked for her was dietary supplements. Molly claims to have gotten thinner by using the Plexus supplements that she promotes to her followers. Molly’s trim figure received praise, and she credited it to a few months of using all-natural, plant-based products.

Molly’s decision to promote Boombod products was a controversial move. However, as of now, fans are growing skeptical of Molly’s weight loss claims, due to the Plexus association. 90 Day Fiancé fans have accused Molly of selling sketchy “pyramid scheme” products. Amid the criticism Molly gets for her weight loss tactics, there are fans who aren’t really approving of the way that she dresses. While Molly will always remain a Pillow Talk fan favorite for her banter with best friend Cynthia Decker, it’s her fitness makeover that is now making Molly a polarizing cast member.

3. Molly Gets A Shocking Blonde Makeover

In April 2021, Molly surprised 90 Day Fiancé fans with a new look, in which she sported wavy blonde hair. Molly wore a bright orange top with a printed skirt, but instead of focusing on her hair, she spoke about Plexus and breast health in the post. The Pillow Talk star’s “Mali(boo) Molly” video, which showed her drastic transformation, has received over 103, 071 views so far. Most of the fans in Molly’s Instagram comments seem to be telling her that she looks “ridiculous.” Even though Molly seemingly clarified in the comments that she was wearing a wig for her video, fans thought it made her look older, and the change to her skin tone was due to bronzer, which didn’t help either.

2. Molly Doesn’t Make A Statement With Her Specs

In her unfiltered video from October 2021, Molly wore blue streaks in her hair, with a graphic t-shirt and a nose ring. Molly was telling fans about her upcoming trip to Dubai, and letting fans know that they could travel with her for a “couple of thousand dollars.” Fans thought Molly looked “beautiful” and “fabulous” in the clip. However, some found 90 Day Fiancé celeb Molly’s oversized glasses really clashed with the rest of her outfit. “No, no those glasses are too big for you,” said a concerned follower on Molly’s post. “Oh please this glasses doesn’t suit you at all,” said a different 90 Day Fiancé viewer. Molly’s reply to them was “I don’t care.”

By July 2021, Molly had lost about 27 pounds, and she was feeling good about her results. She spoke about how her energy was “undeniable,” but the comments were filled with negative energy due to Molly’s outfit. One of her Instagram followers told Molly that her leopard print outfit looked “cheap.” Someone else asked her why she would wear it in public. “i wouldnt wear in public id be to scared to,” the 90 Day Fiancé viewer told Molly. “Horrible outfit!! Please throw that away!” chimed in someone else. Molly’s weight loss is certainly celebrated, but her fashion choices often aren’t, especially when the 90 Day Fiancé celeb wears animal prints.

Why Married At First Sight Fans Are Angry At Nate