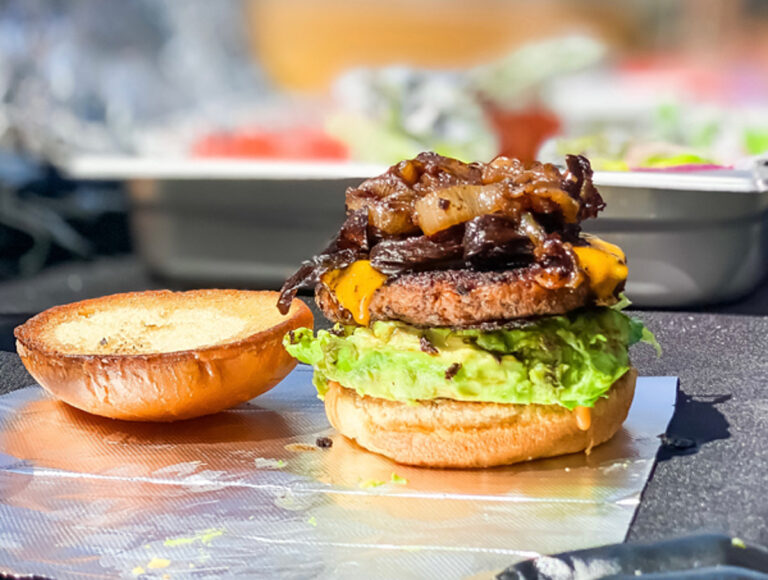 Americans are hungrier for healthier food. Google searches for “vegan food near me” spiked 5,000 percent last year. However, most major events (with few exceptions including Coachella) have failed to cater to the growing population of plant-based guests. Now, after a two-year-long hiatus, Baltimore’s three-day Vegan Soulfest is back and better than ever, stretching a full weekend and featuring 25 artists and the best vegan eats available to its concertgoers.

“This year’s festival is unlike anything that Naijha and I have done before,” Co-founder of Vegan Soulfest Brenda Sanders said. “There’s something for everyone this year – amazing music, dynamic speakers, and the best vegan food in the DMV!”

Vegan Soulfest will celebrate Black businesses, activists, changemakers, and plant-based eating at its three-day event this year. For the first time, the music festival will partner with the We Give Black Fest, an event promoting Black Business Month and Black Philanthropy Month in August. The two festivals will be hosted simultaneously from August 19 to August 21 at West Covington Park in Baltimore.

Guests will be able to patronize several popular vegan food vendors including Everything Legendary, Good as Green, Cajou Creamery, and Land of Kush. In total, the festival will be joined by over 30 vegan food vendors. Regarding music, Grammy-award-winning artists Bilal, Mumu Fresh, Daley, Jade Novah, Ro James, and Grey will headline the event.

To host the event, Sander is joined by VegFest co-founder Naijha Wright-Brown and Jamye Wooten – founder of social change nonprofit CLLCTIVLY. Wooten launched the We Give Black Fest this year to draw attention to Baltimore’s growing Black-owned businesses. The festival will start on August 19 and will include a city-wide scavenger hunt leading participants across Baltimore to sightsee and visit local Black-owned retail businesses.

“CLLCTVLY’s mission is to provide Black-led social change organizations and changemakers with a platform to increase their visibility, expand their impact, and foster deeper connections through community,” Wooten said. “We invite Baltimore to join us in supporting these boots-on-the-ground organizations dedicated to making change a reality in Baltimore and providing for the future of Black Baltimore.”

“Brenda and I couldn’t have been blessed with a better partner than Jamye Wooten of CLLCTVLY to share this reimagined experience of Vegan Soulfest,” Wright-Brown said. “We’ve both always wanted a music festival in partnership with a Black-led organization whose mission is building Black futures. It’s truly the collaboration of the year, especially after feeling closed off from humanity for over two years.”

Guests hoping to attend bot at the Vegan Soulfest and We Give Black Fest can grab a single-day admission ticket for $89. Two-day and three-day admissions cost $149 and $199, respectively.

This April, Coachella returned after two years to deliver guests the most vegan-friendly experience in the legendary music festival’s history. With Nic Adler of Monty’s Good Burger in charge, the event hosted over 20 vegan-friendly vendors so that plant-based concertgoers wouldn’t go hungry.

Following close behind, the Cruel World music festival announced that its entire food selection would be vegan-friendly. Setting a new standard for music festivals, the two-day music festival provided 10 vegan vendors and 20 additional vegetarian vendors to cater to its plant-based guests.

Want to extend your vacation? Check out the Best 8 Places to Eat Vegan and Plant-Based in Baltimore!