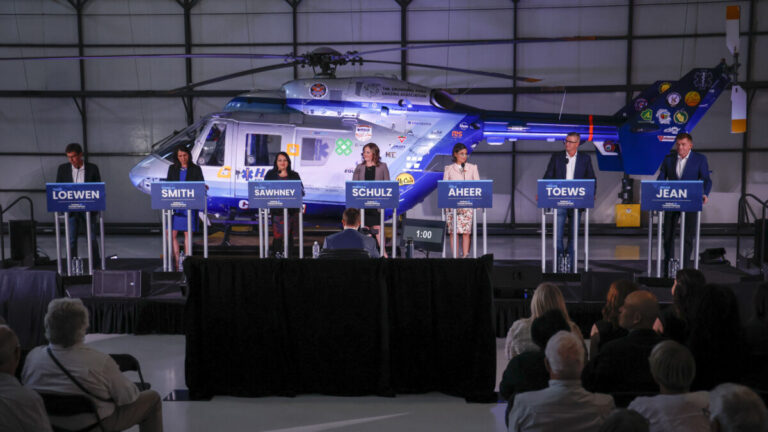 United Conservative Party (UCP) of Alberta leadership candidate Danielle Smith defended her prospective sovereignty act and past comments she made about cancer during the first UCP leadership debate on July 27.

All seven candidates participated in the debate, which was live-streamed from a helicopter hangar in Medicine Hat. The debate covered such issues as protecting the environment, maintaining party unity, and navigating Alberta’s relationship with the federal government.

Rajan Sawhney, who was the UCP’s transportation minister before running in the leadership race, challenged Smith during the debate on her proposed provincial sovereignty act, which, if passed, would allow the Alberta government to refuse to enforce any federal law or policy it deemed harmful to the province.

“The problem is, when we shoot ourselves in the foot with provincial policies … like the sovereignty act, that is creating a politically risky environment and that is going to impact everything I said earlier: environmental initiatives, energy initiatives, agricultural initiatives,” Sawhney said.

Sawhney also said Smith’s sovereignty act would create a situation of “turmoil” and “chaos” in Alberta, to which Smith responded that the federal government is responsible.

“We can’t wish all of Ottawa’s obstructionism away by waving the magic wand on the sovereignty act,” Toews said.

On the topic of health care, Smith addressed comments she made about cancer during a recent episode of her podcast. In the episode, Smith said that natural treatments and lifestyle choices can help prevent cancer before it reaches the need for advanced medical treatment. Smith sought to clarify her comments during the debate, saying they were “misunderstood.”

“I know cancer can strike anyone at any time without any relation to lifestyle. … That’s why I became such a proponent of early detection, early treatment, nutrition, and holistic medicine,” Smith said. “There are so many more options if you diagnose early, then you can treat early, and that’s what I was trying to say, albeit very awkwardly.”

Sawhney responded by saying that Smith’s comments were still “very hurtful” to Albertans and Canadians who have lost someone to cancer or who are suffering from cancer.

Later in the debate, candidate Brian Jean said he wants Smith to promise she will not give “bad medical advice” again. Both Jean and Sawhney called on Smith to apologize for her remarks.

In response, Smith said that former UCP cabinet ministers should apologize for implementing lockdowns during the COVID-19 pandemic.

“When we look at what happened over the last two years of COVID lockdowns—and I haven’t heard any apology from any of the cabinet ministers who imposed that on us for the last two years—I’d like to see an apology there,” said Smith.

The second leadership debate will take place at Edmonton’s Maclab Theatre on Aug. 30, and the UCP will announce its new leader at the Official Election Night Event at Calgary’s BMO Centre on Oct. 6.

The Canadian Press contributed to this report.