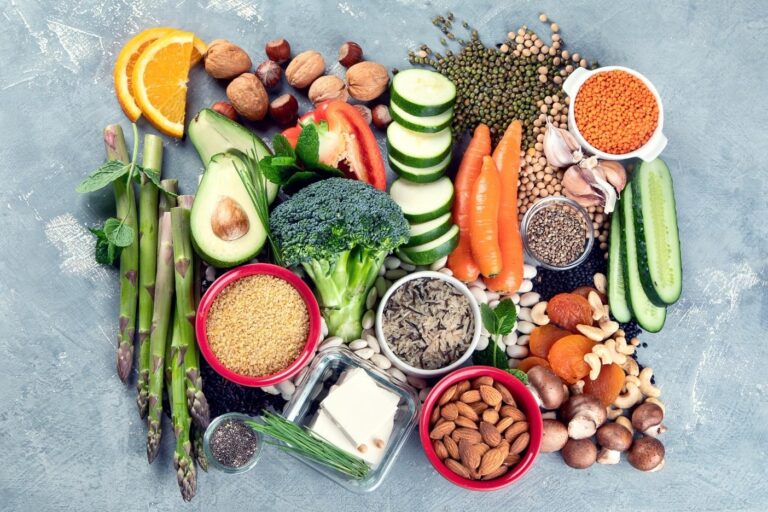 Published in 2019, the “Special Report on Climate Change and Land,” commissioned by the United Nations, took a comprehensive look at how land use influences climate change and vice versa.  According to the findings, “Land use—specifically how we grow, get and eat our food—is a major driver of climate change.”  The authors of the report believe, “balanced diets, featuring plant-based foods, such as those based on coarse grains, legumes, fruits and vegetables, nuts and seeds, and animal-sourced food produced in resilient, sustainable and low-emission systems, present major opportunities for adaptation and mitigation while generating significant co-benefits in terms of human health.”

ASN Journals have been supporting policy makers, public health advocates, and nutrition professionals by publishing original research articles and reviews that help us better understand how to optimize a plant-based diet for human health.  These articles have studied both traditional plant-based foods as well as the growing number of plant-based meat analogs designed to mimic the experience of eating meat.

Below is a sampling of articles recently published in ASN Journals that address plant-based diets, diet quality, and human health:

What Role Do Plant-Based Diets Play in Supporting the Optimal Health and Well-Being of Canadians? A Scoping Review, Advances in Nutrition, May 2021

Zoe L. Bye et al. conducted a scoping review to determine the nutritional adequacy of plant-based diets, their relation with chronic diseases, and their ability to support health and well-being among Canadians.  Canadian peer-reviewed literature on diet, nutritional quality, and chronic disease were systematically examined, leading to 16 articles that met the authors’ criteria.  Following their review, the authors found substantial evidence “to support an association between the practice of plant-based dietary patterns and improved health and well-being of Canadians as seen through reduced odds of chronic conditions.”  For example, the authors found the “odds of developing type 2 diabetes were reduced by 61.9% among vegan members, 51.4% among semi-vegetarian members, and 38.2% among lacto-ovo-vegetarian members in comparison to nonvegetarian members.”  The authors did concede, however, that “many Canadians still choose not to adapt to a more plant-based lifestyle due to perceived social hindrances, the feasibility of preparing plant-based meals, and their enjoyment of meat products.”  Interestingly, “women are more willing to reduce animal product consumption in comparison to their male counterparts.”

A Meta-Analysis of 46 Studies Identified by the FDA Demonstrates that Soy Protein Decreases Circulating LDL and Total Cholesterol Concentrations in Adults, The Journal of Nutrition, April 2019

In 1999, the U.S. Food and Drug Administration (FDA) authorized soy protein foods to carry a heart health claim based on soy protein’s role in reducing the risk of coronary heart disease.  The FDA, however, issued a proposed rule to revoke the heart health claim for soy protein due to inconsistent findings in randomized controlled trials on the role of soy protein in LDL cholesterol reduction.  The FDA still has not issued a final ruling on this topic.  To support the FDA’s decision making, Sonia Blanco Mejia et al. conducted a meta-analysis of 43 controlled trials identified by the FDA to determine soy protein’s effect on LDL cholesterol, as well as on total cholesterol, in adults compared with other types of protein.  In total, these trials included 2,607 participants, of whom 37% were men and 63% women.  Following their analyses, the authors concluded “soy protein lowers LDL cholesterol by a small but significant amount.”  Specifically, “soy decreased LDL cholesterol by ∼3.2% and total cholesterol by 2.8% as a result of consuming ∼25 g soy protein on a daily basis.”  The authors maintain “our data support the advice given to the general public internationally to increase plant protein intake.”

Healthy Plant-Based Diets Are Associated with Lower Risk of All-Cause Mortality in US Adults, The Journal of Nutrition, April 2018

Plant-based diets are associated with health benefits; however, the association with mortality has been less clear.  In response, ASN member Hyunju Kim et al. investigated the associations between plant-based diet indexes and all-cause mortality.  To conduct their research the authors constructed an overall plant-based diet index (PDI), which assigned positive scores for plant foods and negative scores for animal foods.  In addition, the authors developed a healthful PDI, in which only healthy plant foods received positive scores, and an unhealthy PDI, in which only less-healthful plant foods received positive scores.  Using these indexes, the authors analyzed data from 11,879 participants, aged 20 to 80, from the Third National Health and Nutrition Examination Survey (NHANES III), conducted from 1988 to 1994, tracking participants’ mortality through 2011.  In conclusion, the authors found that “diets with greater intakes of healthy plant foods showed a nonlinear association with all-cause mortality.”  Specifically, a 10-unit increase in the healthful PDI above the median was associated with a 5% lower risk of all-cause mortality.  Interestingly, in stratified analyses, study findings indicated “a similar pattern in women with higher adherence to healthy plant-based diets, but no significance was observed for men.”

Evidence mapping describes the quantity, design, and characteristics of research in broad topics, in contrast to systematic reviews, which typically address more narrowly-focused research questions.  In this study, Akari J. Miki et al. applied evidence mapping techniques to summarize motivations to adopt a plant-based diet.  Overall, they found that “followers of more stringent diets, such as vegans and vegetarians, tended to endorse ethical motivations, whereas those seeking to simply reduce meat consumption (semivegetarians) tended to endorse health motivations.”  Notably, the study found that adolescents who adopt plant-based diets are unlikely to be influenced by a family member.  For example, “studies estimated that only 3-14% of adolescent vegetarians lived with ≥1 vegetarian family member.”  The authors pointed out that because this is an emerging field of study, there are only a few studies with large sample sizes: “Larger sample sizes that isolate specific types of plant-based diets will be conducive to obtaining robust evidence on dietary motivations as predictors of eating pathology and on incentives to reduce meat consumption and integrate more plant foods in the diet.”

Evidence suggests that adopting a plant-based diet may have both environmental benefits and human health benefits; however, most ASN Journal authors have called for more research to fill critical knowledge gaps.  We need to learn more not only about the impact of plant-based diets on human health, but also how we can motivate more consumers to move towards a plant-based diet.  If you are conducting research that can help shed new light on these key issues, please consider submitting your original research findings or scientific review to ASN Journals where we are committed to publishing your research as quickly, seamlessly, and broadly as possible.

Eric Graber is a freelance copy writer and marketing consultant, working primarily for publishers and professional associations in science and medicine.  He has a BA in Spanish Literature from Columbia University and an MBA in marketing from NYU Stern School of Business.