Bacteria that cause gum disease may increase risk 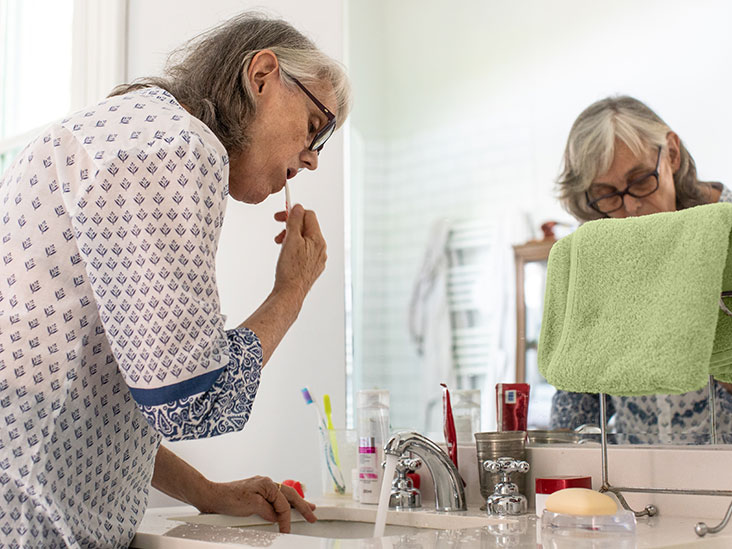 Now a team of researchers from Tufts University has found a correlation between gum disease through the bacteria Fusobacterium nucleatum (F. nucleatum) and Alzheimer’s disease via a mouse study. Scientists believe their findings may help reduce the progression of both periodontal disease and this form of dementia.

The study was recently published in the journal Frontiers in Aging Neuroscience.

If plaque sits too long on the teeth and gums, it hardens into a substance known as tartar. Because tartar is very hard, normally, only a dentist can remove it using dental instruments during a professional dental cleaning.

When tartar remains on teeth for too long, the next level of gum disease known as periodontitis can set in. Periodontal disease leads to a greater infection in the gums and teeth. If left untreated, periodontitis can result in .

According to the , about 47% of adults over 30 and 70% over 65 in the United States have periodontal disease. Gum disease is more common among men and .

According to Dr. Jake Jinkun Chen, professor of periodontology and director of the Division of Oral Biology at Tufts University School of Dental Medicine and the lead author of this study, the purpose of this new study is to identify and characterize the association of -induced periodontal disease with Alzheimer’s disease.

F. nucleatum is a bacteria commonly involved with periodontal disease. Past research also links the bacteria to colon cancer and .

How could bacteria in the mouth exacerbate symptoms of Alzheimer’s disease? It can do two things, Dr. Chen told MNT.

“One, (it) generates inflammation both locally and systemically, which will affect the Alzheimer’s disease phenotype, as Alzheimer’s itself is an inflammatory disease,” he explained. “Two, it migrates and penetrates to the brain to colonize there and secrete pathological molecules to exacerbate the symptoms and signs of Alzheimer’s disease.”

For this study, Dr. Chen and his team used cells cultured in a laboratory to show that the presence of F. nucleatum caused abnormal growth of microglial cells. These immunity cells in the brain and spinal cord help remove any infection from the brain, keeping the central nervous system healthy. In addition to impacting their growth, the presence of F. nucelatum also led these cells to create an inflammatory response. Past research shows inflammation plays a role in the development of Alzheimer’s disease.

Next, the team looked at F. nucleatum-induced periodontitis in a mouse model of Alzheimer’s disease. They found that, compared to control animals, mice with such periodontitis experienced increased cognitive impairment and higher levels of amyloid plaques and Tau protein. Further, as in the cultured cells, increases in microglial cell growth and inflammation were also seen in these animals.

Dr. Chen said the significance of their research findings lies in four main areas. First, they are targeting an “enormous health problem” because a significant percentage of the adult population has periodontal disease and more than 55 million people globally live with . Alzheimer’s is the most common type of dementia.

“Two, mechanistic understanding of an understudied anaerobic bacteria (F. nucleatum) in the pathogenesis of periodontal disease and Alzheimer’s disease fills in a gap in scientific knowledge and sends an alerting signal to dentists and neurologists,” Dr. Chen continued.

“Three, establishment of an animal model provides technical capability in delineating the possible [causative] between a local dental disease (periodontal disease) and a neural disorder (Alzheimer’s disease) in a remote anatomic site,” he added.

“And four, the study may provide proof-of-principle for further pre-clinical and clinical applications of the established system to study whether treatment of periodontal disease can decrease or delay the onset of Alzheimer’s in humans,” Dr. Chen concluded.

MTN also spoke with Dr. Percy Griffin, director of scientific engagement of the Alzheimer’s Association. Dr. Griffin said this study adds to the growing evidence that microbes and viruses may play a role in brain disease.

“In this study, they found evidence for increased activation of the brain’s immune system, Alzheimer’s related brain changes, and cognitive changes in mice infected with an oral microbe,” Dr. Griffin said. “While these findings are interesting, this research was done in mice, and previous studies examining the relationship between periodontal disease and Alzheimer’s in humans have not demonstrated causation. More research is needed.”

“We don’t know at this time whether things like brushing your teeth will ultimately reduce your risk for Alzheimer’s,” he added. “What we can say is good oral hygiene is important for overall health and healthy aging. There are a number of other modifiable lifestyle risk factors — like exercise and diet — that have considerable scientific evidence to show they can reduce your risk for cognitive decline.”