Breeding fish that can thrive on the new generation of aquafeeds 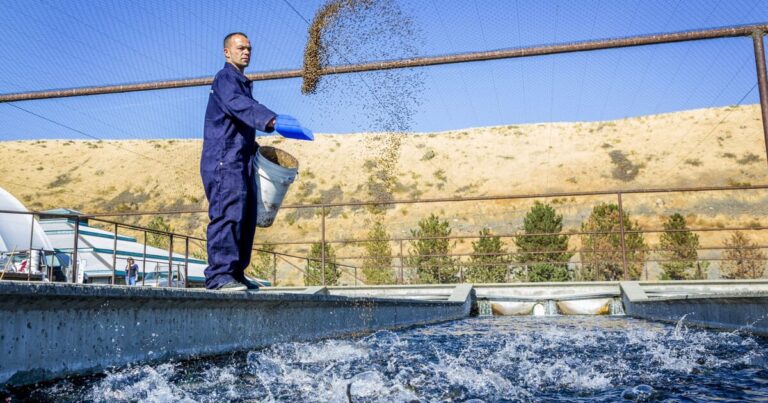 As I learned when trying to find an answer to that question, it’s possible in theory but it requires special ingredients and supplements, as well as close monitoring by a veterinarian. As one might imagine, similar performance and welfare issues come into play when modifying aquafeeds for carnivorous aquatic species.

While terrestrial livestock species are generally herbivorous or omnivorous, cultured aquatic species include a variety of herbivores, omnivores and carnivores. Salmon, trout, bass and many catfishes are examples of widely cultured carnivorous species. As fish in – fish out (FIFO) concerns have been raised related to the aquaculture industry as a whole in recent decades, significant research has gone into alternative protein and lipid sources for feeds. At the same time, a relatively small group of researchers has looked at the problem from the other angle: applying selection in cultured aquatic species to develop strains that can accommodate manufactured diets with little or no marine ingredients.

Most of the pioneering work in this line of research has utilised analyses of genotype by diet interactions – by which two or more genotypes (varieties, strains, families, etc.) are ranked differently for a specific performance characteristic when fed different diets. One of the first carnivorous (or carnivorous-leaning) aquatic species examined for genetic potential to adapt to all-plant diets was the rainbow trout, Oncorhynchus mykiss. In recent years, O. mykiss has accounted for over 900,000 tons of global production, with a value of more than $4 billion USD, so this was a good species to start with.

In 2008, one of the first reports of genotype x diet interaction in rainbow trout (Kamloop strain) was published by a group of researchers in the US. While the experimental diet in this study was not completely plant-based (5 percent fish oil and 5 percent krill meal were included), primary ingredients were corn gluten (34.6 percent), soybean meal (19 percent), wheat flour (14.4 percent) soybean oil (8.4 percent) and wheat gluten (7 percent). A significant family × diet effect (explaining 5 percent of the observed variation in body weight) was detected. The data suggested that substantial genetic variation for utilising plant-based diets containing soybean meal and oil was present in this widely used commercial strain.

The key finding of this study was that different family rankings within the two dietary treatments indicated significant potential to select for improved performance with plant-based feeds.

At about that time, a group of researchers from France developed a plant-based rainbow trout diet to evaluate the ability, if any, of 250 different families to survive and grow without access to traditional marine ingredients (fish meal and fish oil). They reported their results in 2011, with some striking findings. As might have been expected, at 343 days into the study, the body weight of the fish fed the normal diet was twice that of those fed the plant-based feed. This was probably linked to a combination of decreased feed intake, poorer digestibility of carbohydrates and the presence of anti-nutritional factors in the plant-based diet. However, the key finding of this study was that different family rankings within the two dietary treatments indicated significant potential to select for improved performance with plant-based feeds.

A follow-up study examined the long-term potential for vegetarian rainbow trout. The objective was to determine whether O. mykiss reared on a plant-based diet from first feeding to reproduction were capable of synthesising sufficient amounts of n-6 and n-3 long-chain polyunsaturated fatty acids (PUFAs) to survive and produce viable ova and offspring. The experiment was conducted by rearing female fish using either a commercial diet in which 45 percent of the fishmeal and 50 percent of the fish oil were replaced by plant ingredients, or an experimental plant-based diet completely free of fishmeal and fish oil. After their first (year 2) spawning season, the researchers continued raising the fish up to their next spawning (at 3 years old). At each spawning approximately 400 ova per female were fertilised with a pool of sperm collected from males fed a commercial diet. Survival rates of progeny were measured at the eyed stage, at hatching, and at swim-up.

At first spawning the body weights of the females fed the vegetarian diet were higher (+18 percent) than those of the females fed the control diet, but experimental limitation of food supplied to the group may have accounted for this, since no such difference was found at the year 3 spawning. At the year 3 spawning no differences in absolute fecundity were detected, but average ovum weight was significantly lower in fish fed plant-based feed, as was the gonadosomatic index. At the first spawning, survival rates for progeny from vegetarian females were lower than from broodstock fed the “normal” diet, but by the year 3 spawning no significant differences were detected.

Wide variability was observed in the performance of female trout fed the vegetarian diet, so a separate study was designed to pursue this line of inquiry. The vegetarian line was selected over three generations for its ability to survive and grow when fed a plant-based diet with no fish oil or fishmeal. Fish obtained from these crosses were fed from the first-feeding stage with a strictly plant-based diet. Marine products were replaced by a blend of vegetable meals (wheat, fava bean, corn, soybean, lupin and peas) and vegetable oils (rapeseed, linseed and palm oils). Plant-based diets were supplemented with minerals and vitamins, and with amino acids to meet known rainbow trout essential amino acid requirements.

Surviving fish were graded by size several times between the second and 14th months after first feeding. The final proportions of selected fish ranged from 3.9 percent (first generation) to 4.9 percent (third generation). After the last sorting (14 months), selected fish were fed a commercial diet to ensure normal reproduction and prevent any selection on fish reproductive capacity, since prior work had shown that rainbow trout females fed all their life with a 100 percent plant-based diet had very heterogeneous reproductive performance.

Increased fish performance was attributed to a higher feed intake… highlighting the fact that acceptance of plant-based diets was still a major impediment.

A seven-month feeding trial was performed on fish produced from the third generation of selection. Within each line three batches were fed with a 100 percent plant-based diet, while three other batches were fed with a marine ingredients-based diet. While the plant-based diet diminished fish body weight, at least partially due to lowered feed intake, selection imposed on prior generations increased it. There were no significant differences between the mean body weight of selected fish fed the plant-based diet and control fish fed the marine-based diet at the end of the trial. Still, the majority of the nutritional traits studied were highly impaired by the plant-based diet, in both lines. Increased fish performance was attributed to a higher feed intake, irrespective of the diet, highlighting the fact that acceptance of plant-based diets was still a major impediment. But results also predicted significant improvement through selection for appetite.

More recently, the availability of these trout, selected for performance on a plant-based diet, has allowed some of the original research group to go forward with investigations as to the underlying mechanisms allowing this adaptation. They found that a number of genes were differentially expressed in response to the plant-based diet, and these genes were associated with energy production, protein synthesis and lipid and cholesterol metabolism. Additionally, immune-related physiology appeared to have an influence on adaptability to plant-based feed in rainbow trout. Similar results have been reported with another strain of O. mykiss selected to tolerate plant-based feed.

In 2011, many of the same French researchers reported on genotype x diet interactions in the European sea bass, Dicentrarchus labrax. They fed two diets, one with 100 percent of normal fish meal and fish oil ingredients, and another with no fish meal or fish oil, to 224 families of sea bass. Family performance rankings differed modestly from one diet to the other, and heritability estimates (the portion of observed variation that would be expected to be transmitted to the next generation) for body weight differed significantly between the two dietary groups. Heritability for body weight was 0.47 for fish fed the regular diet, and 0.37 for those receiving the plant-based diet, indicating more non-heritable factors were involved in the size variation among fish receiving the plant-based diet. Taken together, however, the results suggested that selection for growth on plant-based diets would be feasible for this species and that selection for growth on normal diets should result in improved performance with plant-based diets.

Early research with rainbow trout yielded similar results, and years later a group of researchers from Spain reached similar conclusions with gilthead sea bream. As has been the case with vegetarian rainbow trout, several generations of selection on plant-based feeds will probably be required before underlying genetic adaptations are discernable for superior performance under these conditions.

A study in China several years ago detailed genotype x diet interaction in three strains of gibel carp (Carassius gibelio). Fish were fed either fishmeal-, soybean meal- or rapeseed meal-based diets for eight weeks. Growth, feed conversion, body composition and lipid metabolism were all affected by both diet and strain. In general, the plant-based diets resulted in reduced performance, but highly significant strain x diet interactions were apparent for feed intake, specific growth rate and feed efficiency. A related study indicated that performance differences were based on major physiological processes such as amino acid metabolism, lipid metabolism and digestive functions.

A different group of researchers in China recently reported on the use of genome-wide association to evaluate the potential for selection in the large yellow croaker to improve utilisation of high plant protein diets. They formulated two experimental diets in which 30 percent or 70 percent of the normal fish meal content was replaced. A number of significant SNP markers were associated with weight gain in both groups, and some differences were noted between the two diet treatments, but significantly more work will be required to identify specific SNPs associated with vegetarian adaptability in this species.

Once genomic data are sufficiently detailed to identify individuals that are more likely to adapt to plant-based diets the process should be straightforward.

As we have previously discussed here, modern genomic methods are advancing rapidly. As more genomes of cultured aquatic species are characterised, selection for any number of traits will become increasingly efficient. The challenge will revolve around identifying those animals we want to retain as breeding stock. Once genomic data are sufficiently detailed to identify individuals that are more likely to adapt to plant-based diets the process should be straightforward. However, to do this will require the development of lines that have already demonstrated some degree of tolerance to plant-based feeds under real-world conditions, as was the case with rainbow trout.