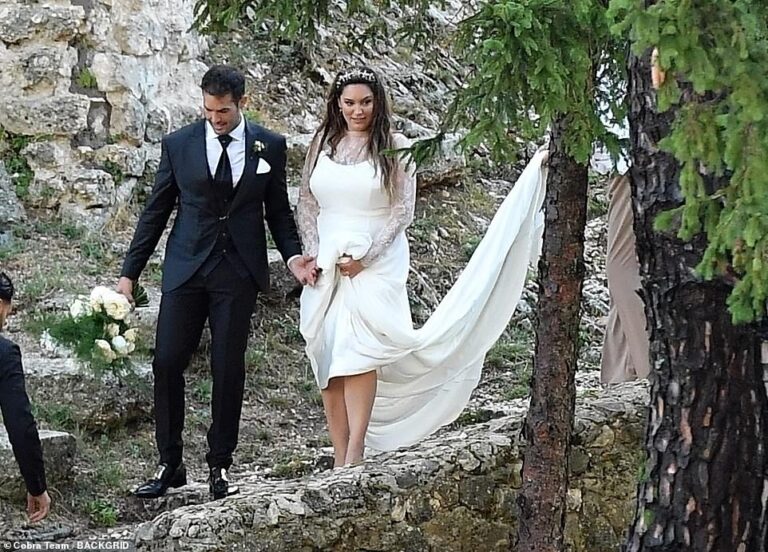 It was Kelly Brook’s big day – and an unseasonal downpour wasn’t going to spoil it.

The 42-year-old British model and actress married long-term boyfriend Jeremy Parisi in his native Italy on Saturday, arriving at the ancient venue under an umbrella.

They exchanged vows in the historic port town of Civitavecchia, near Rome, with Kylie Minogue reportedly among the guests. A storm saw the outdoor event moved indoors to the Torre di Cicero, once occupied by the Roman orator. 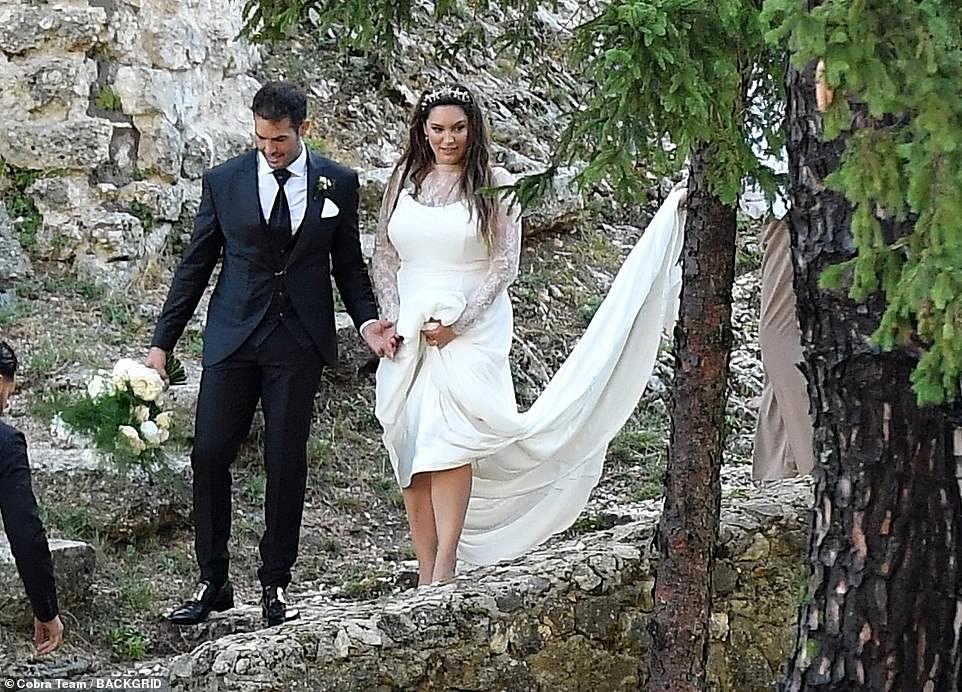 Kelly Brook and Jeremy Parisi tied the knot on a torrential day in Frosinone, Italy. The wedding was planned outside but later moved to an indoor venue 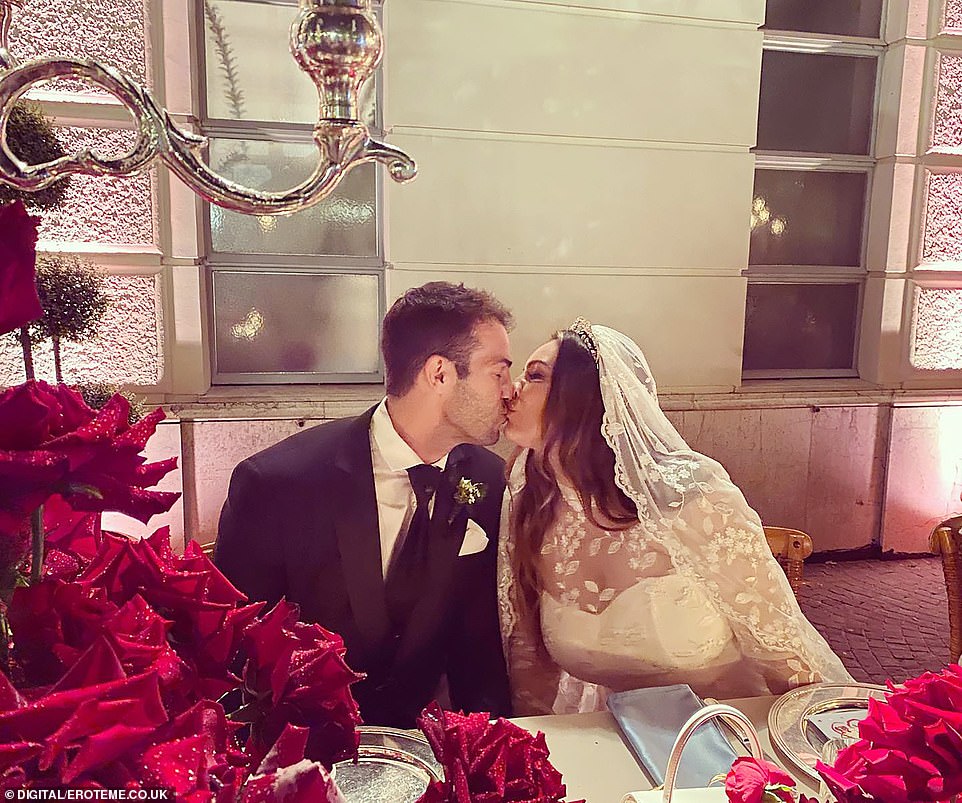 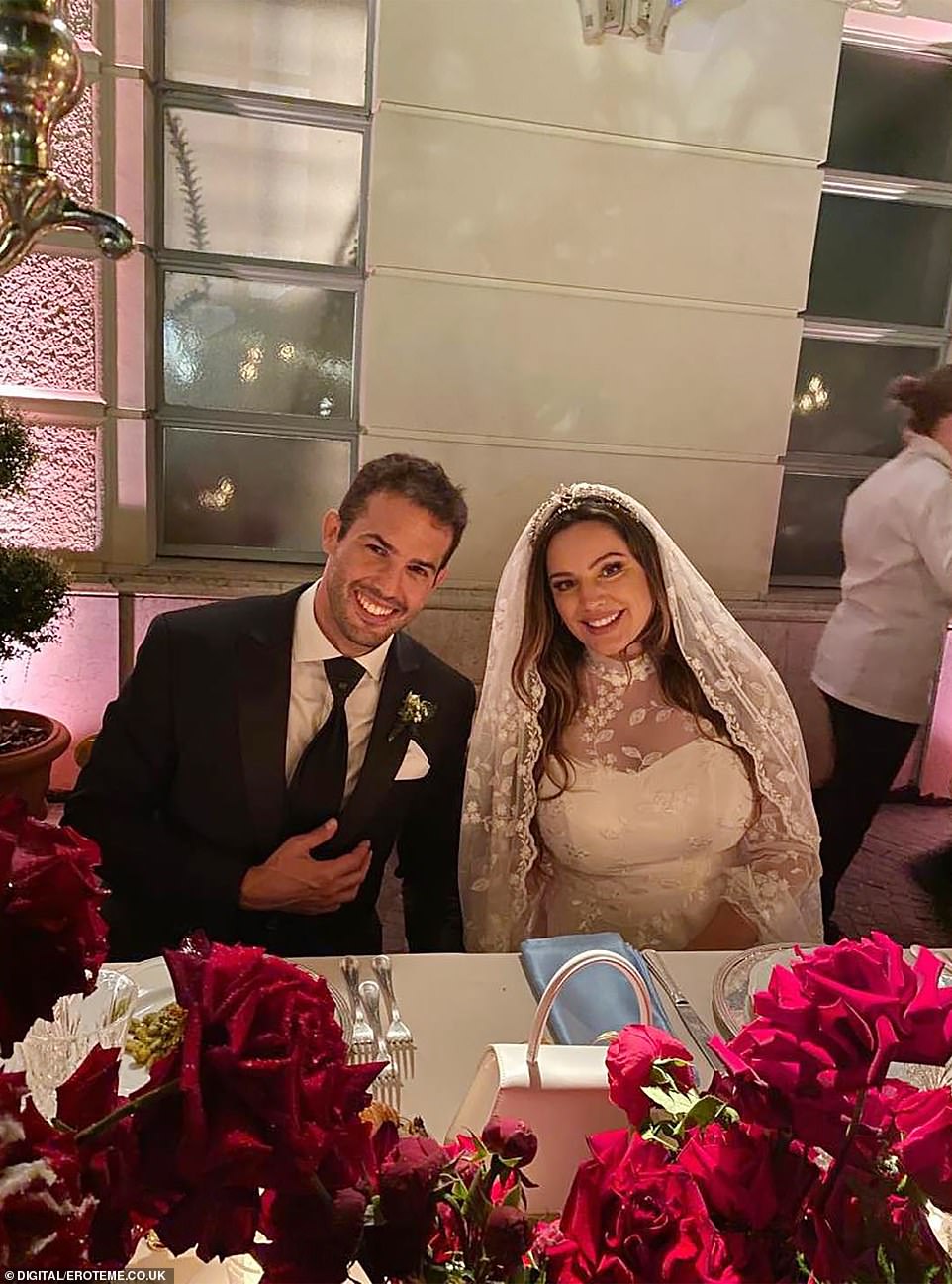 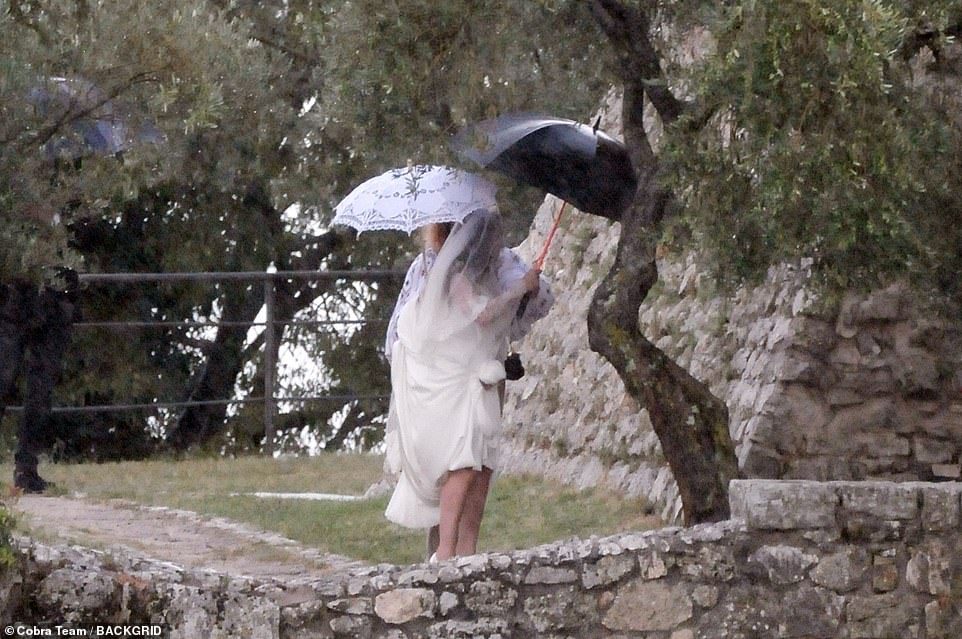 Kelly Brook arrived at the Torre di Cicero under an umbrella, but an unseasonable downpour wasn’t going to spoil the big day

A source suggested the wedding cost up to £500,000, telling The Sun: ‘Kelly knows Jeremy is her soulmate and this is going to be her only wedding so she’s going all out.’ She previously dated actors Jason Statham and Billy Zane.

After earning her fortune following a successful 25 year career as a model, actress and media personality, it appears there was no expense spared when it came to making Kelly’s wedding dream come true.

The source added: ‘Kelly knows Jeremy is her soulmate and this is going to be her only wedding so she’s going all out. All in it is looking to cost her between £300,000 and £500,000 — but to her it is money well spent.

The insider continued to say that it is ‘Kelly’s dream wedding’ and that ‘everything she ever wanted’ is now ‘becoming a reality.’

It comes after Kelly shared that she won’t be doing any slimming down for the big day, admitting that she is ‘so happy’ with her appearance.

Explaining: ‘I’m the happiest when I’m a size 12’, which she currently is – the star opened up about her previous struggles with weight and how she sticks to an active lifestyle now. 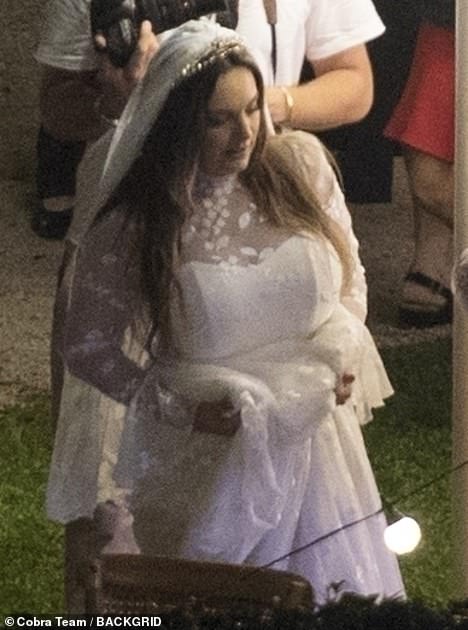 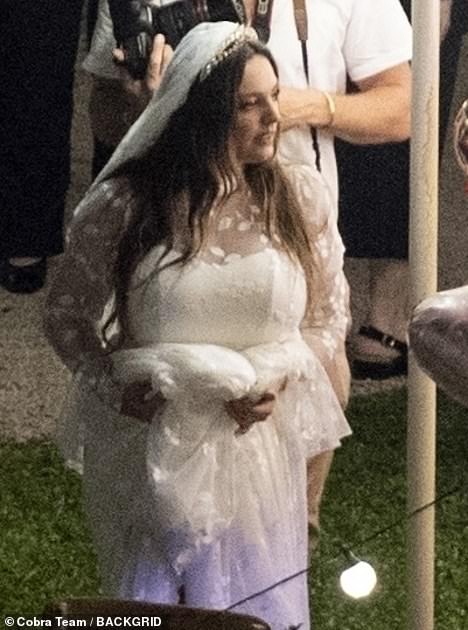 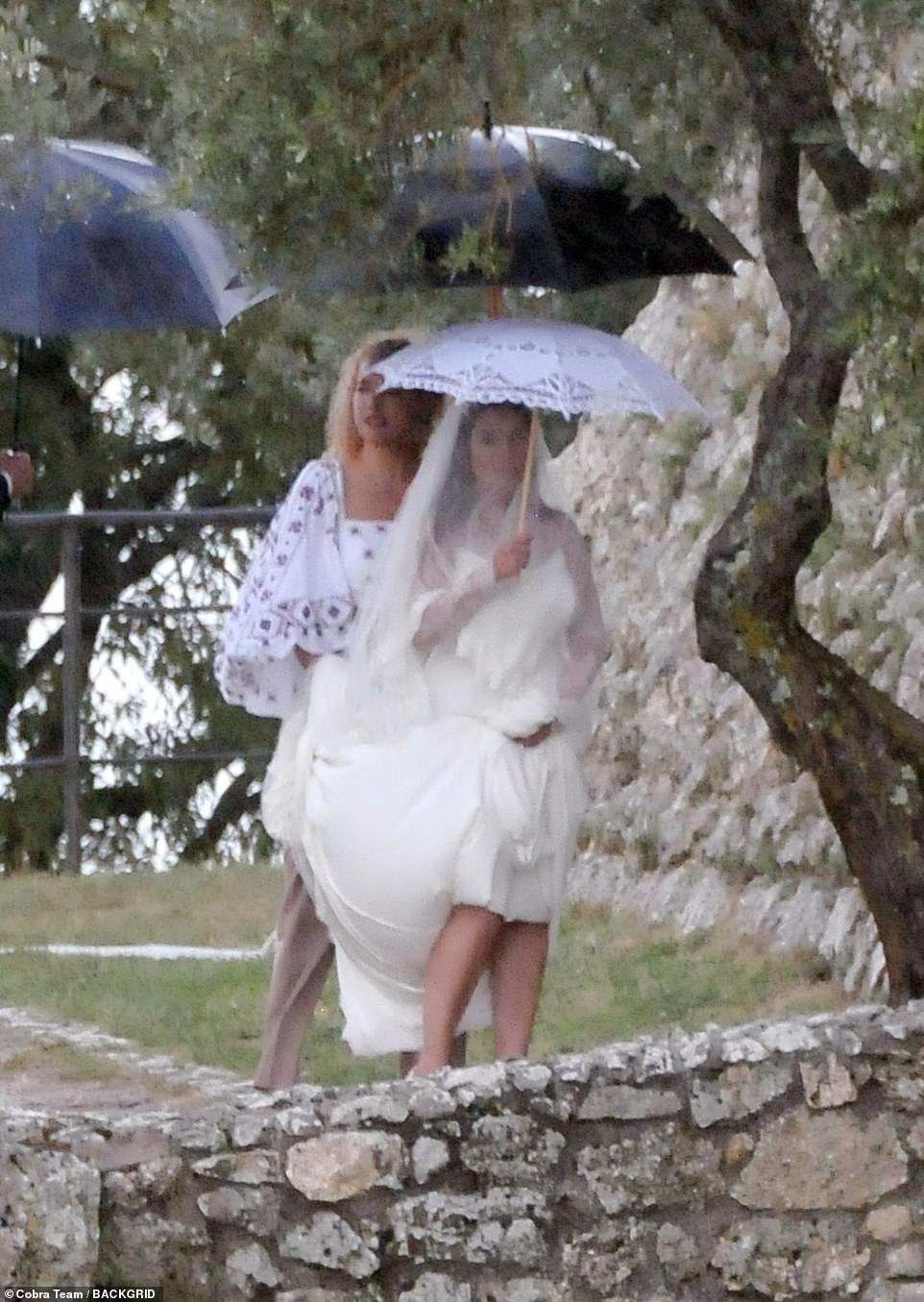 Rain rain go away: She protected her resplendent dress from the rain by ducking beneath a parasol

Talking to Fabulous Magazine, the former model admitted that she is keeping her wedding plans under wraps, but denied that she would be doing any pre-wedding dieting.

Oh, no [I’m not going on a diet]. I’ve not even really thought about that, to be honest. I’ve been on a diet plan for a few years now, and I’m at my weight that I love and I will stay at this weight no matter what’s coming up in the future,’ she replied when questioned on the big day prep.

The popular TV and radio presenter embarked on a relationship with the hunky Italian model in 2014 after watching one of his Instagram videos, and friends claim she’s ‘happier than ever’ following the understated engagement.

Staying coy over the day, she explained: ‘I just have to protect my partner. He’s not in the public eye and he doesn’t typically like to talk about things that we do privately.

‘As much as I’m a big mouth and like to tell everything that I’ve got going on, he’s the complete opposite. And I think you have to respect your partner’s wishes.’