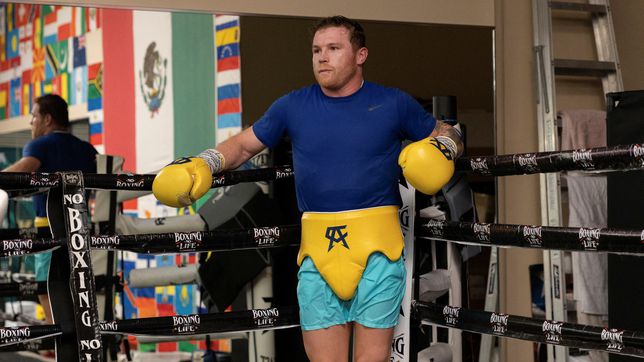 While preparing for his previous fight with Russian Dmitry Bivol, a Netflix documentary invited Saúl Canelo Álvarez to maintain a vegan diet following a trend of elite athletes who have improved their performance by removing products of animal origin from their food.

The meal plan did not work as the Mexican expected. Alvarez failed in the attempt to dethrone the Russian from the top of the light heavyweight category where he holds the WBA belt.

Back in the super middleweights, Canelo Álvarez will close the trilogy with Gennady Golovkin on September 17 in Las Vegas.

To get the second victory over the Kazakh and retain the four most important belts in the division, the man from Guadalajara returned to his old routines.

“Many things have changed in my physical conditioning, I didn’t go running because I had a knee injury, now I do it and it has gone well for me. We will increase the distance in these weeks and already in the last two we will go down and do more speed training,” Álvarez said in an interview with the Associated Press.

According to the boxer, due to the operations he has undergone, he has not jogged continuously since 2018, the year in which he defeated GGG for the first time.

Running during training has long been a staple of any non-heavyweight fighter. In addition to helping to reduce weight, jogging strengthens the physical condition of the fighters.

Alvarez also decided to leave the vegan diet behind and go back to feeding on animal meat, as the vast majority of boxers have done since the beginning of the sport .

“I tried to do it for a few weeks and it’s very difficult to change everything suddenly, so now, like all my life, I continue to eat the same as before. I feel great, I’ve been training hard and I’m confident for the fight.”