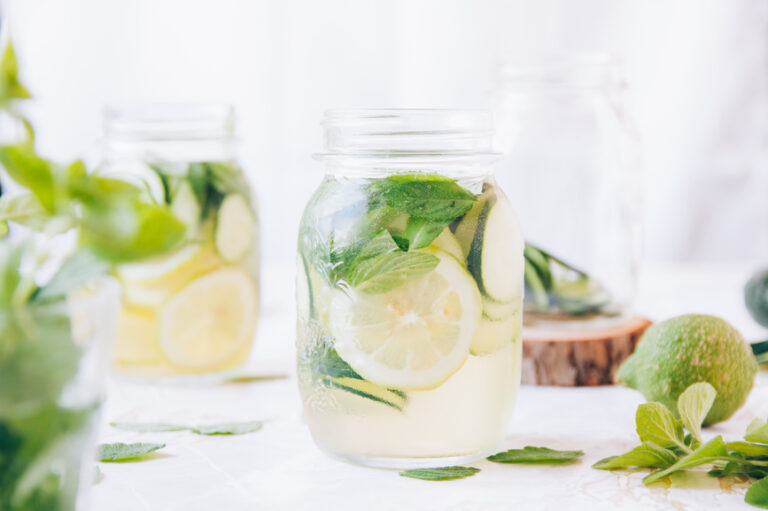 Alright, alright, as you can imagine I have gotten a lot of push back from friends, family, and colleagues alike when I first introduce them to my celery lemonade. However, the people who have been lucky enough to taste some of it have confirmed that the unique (albeit creative) lemonade recipe does indeed have a deliciously satisfying flavor that offers some thirst-quenching relief, particularly on hot summer days.

Recently, I was going through my fridge to see what produce I need to run through my Pure Juicer before it started to turn in the back of the crisper drawer. (This new waste-free method of mine, by the way, has been life-changing—I finally have the freedom to shop for fruits and veggies knowing that none of it will get trashed or force me to eat a herculean amount of celery in one sitting out of spite.)

…Cut to this being how I found myself with a glass filled to the brim with fresh celery juice and zero desire to drink it on one very hot and humid Monday night. I spied some lemons waiting to be used and had a brilliant idea: When life gives you lemons (and celery juice), why not make some celery lemonade? That I did, and I was pleasantly surprised by the results.

There are a lot, and I mean a lot, of articles written about celery juice and its benefits. Heck, I’d be willing to bet that there are entire books on the topic. The green “elixir of life” has been carrying one very sizable health halo for years, largely due to its popularity (for better or for worse) among social media influencers. This, according to Lindsay Wengler, MS, RD, CNSC of Olive Branch Nutrition, can make it very difficult to know what benefits celery actually has. So I had her break it down further.

Though celery is nearly 95 percent water—which makes it a super hydrating food—it is also a nutrient-rich powerhouse.

Celery juice provides a variety of antioxidants like apigenin and luteolin, both of which are also known to be anti-inflammatory. “Antioxidants are great to consume on a regular basis because they can find and destroy free radicals, aka cancer-causing cells,” Wengler says. The vegetable also has high levels of vitamin C, potassium, and it’s super rich in gut-friendly fiber. Celery juice also contains a good amount of vitamin K, which Wengler says plays a vital role in the process of blood clotting and bone metabolism.

“Celery also serves as a natural source of sodium,” says Bonnie Taub-Dix, RDN, creator of BetterThanDieting.com and author of Read It Before You Eat It—Taking You from Label to Table. “This can be important when you’re trying to rehydrate the body.” Most hydrating sports drinks, like Gatorade or Nuun, contain some amount of sodium—according to Taub-Dix, it’s an important part of your body’s fluid balance. (Note: If you’re trying to watch your sodium intake, know that celery also isn’t high enough in sodium such that it should be avoided. However, Taub-Dix adds that those following a no-salt diet should probably avoid the vegetable and consider peppers, potatoes, onions, and other low sodium plants instead.)

So, as far lemonade goes, Taub-Dix added that lemonade is a great way to get celery juice into your beverage rotation. Because let’s be honest: Most of the time, celery isn’t exactly exciting to eat because of the flavor and also the fibrous texture. The acidity of the lemons and the sweetness of the sugar in this lemonade recipe pair perfectly with the tangy, crisp celery. I promise: The celery isn’t super obvious. It just adds a slight savory, super refreshing dimension to the drink.

Ready to try it out? Find the full recipe below.

2. Stir until the mixture is a light green color, again making sure that all the sugar has dissolved.

3. Add the water, tasting as you go so that it reaches the flavor profile you prefer. Chill in the fridge until cold.

Our editors independently select these products. Making a purchase through our links may earn Well+Good a commission.