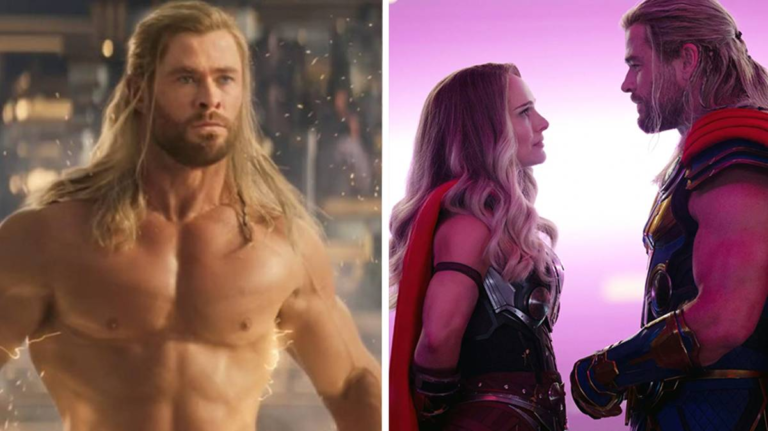 Chris Hemsworth has to follow a very strict diet in order to transform into the beloved hero Thor which usually involves eating lots of meat.

However the actor skipped his usual meaty dishes for one particular scene in the new film Thor: Love and Thunder as a sweet gesture for his co-star Natalie Portman.

Thor and Portman’s character Jane Foster rekindle their romance in the new film after they lock lips.

Out of respect for Portman’s vegan diet, Hemsworth decided to forego eating meat on the morning they filmed the kissing scene.

“The day we had a kiss scene he didn’t eat meat that morning, because I’m vegan. And he eats meat like every half hour. Like, that was so thoughtful.,” Portman told Capital Breakfast with Roman Kemp.

Although Portman has been a vegetarian since she was eight and a vegan since 2009, she did not ask the 38-year-old former Home and Away star to change his meal plan for her.

She added: “That’s not something I’m angry about or care about, but he was just being thoughtful. He’s just a very nice person.”

Portman first played Jane Foster in the 2011 film Thor and she returned for the sequel, Thor: The Dark World in 2013.

The actor did not return for the third film, Thor: Ragnarok, which introduced Taika Waititi to the Thor universe and marked a significant change to the tone of the films.

Ragnarok was acclaimed for its acting and Waititi injecting his own style and humour to the film.

For the fourth Thor film, Waititi wanted to make a romance film. Portman agreed to return after meeting Waititi.

At the 2019 Comic Con it was confirmed that Jane Foster would become the female Thor in the fourth film. Foster suffers from terminal cancer in the film when she takes on the mantle and powers of Thor.

Meanwhile, Hemsworth is currently the only MCU actor to lead more than three solo films with the release of Love and Thunder.

Hemsworth recently gave Marvel fans a huge boost of confidence after he revealed that Thor: Love and Thunder will not be his final Marvel Cinematic Universe (MCU) film.

The father-of-three won’t be hanging up his hammer any time soon after telling Elle Man that despite being 1,500 years old, Thor is far too young to retire.

When asked about his future in the MCU, Hemsworth replied: “Are you crazy?! I’m not going into retirement. Thor is far too young for that. He’s only 1500 years old! This is definitely not the film where I say goodbye to this brand. At least I hope so.”

Thor: Love and Thunder is in cinemas now.