Comedian Kate Barron on drastic weight loss, why chairs are a source of terror and her new Edinburgh show 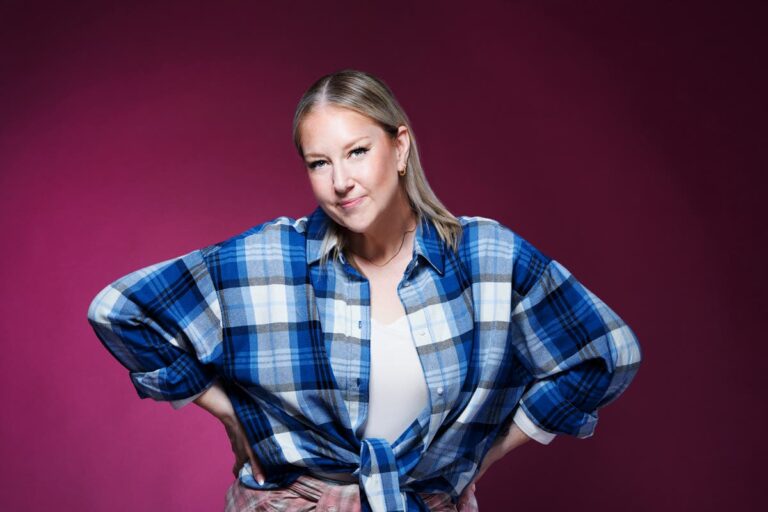 lot of people made major life changes during the pandemic, but none more so than the Canadian comedian Kate Barron. Just a few months into a new life in Britain – having split with her long-term partner in Canada, left her job and home and moved here with the intention of finally taking comedy seriously as a career, only to be stuck in a houseshare in London with people she barely knew – she made a secret decision. Without even telling her flatmates, she got on a plane, flew to Turkey, signed a few forms she literally couldn’t read and, without telling a soul, had 80 per cent of her stomach removed.

By the time any of her family found out and saw her again she had shed 13 stone, which is, to give you some contemporary context, almost exactly the weight of Chris Evans bulked up to play Captain America.

Barron’s decision, the journey to making it, and the journey it began is the subject of her new Edinburgh show, Losing Myself. And as she genially weaves a tale of what is, really, an extreme transformation, you begin to realise the extent of how the world is simply not set up for larger people.

It’s hard to freely develop your own style because there just aren’t enough clothes available in the shops, and where there are, they’re usually “at the very back where no-one’s going to see you”. A long-haul flight in economy is physical torture – to the overweight, chairs of all kinds are a source of trepidation. Barron tells a story about arriving for a lovely dinner, “and all my skinny little beautiful friends took all the chairs without arms,” she says. Too embarrassed to speak up, Barron spent four hours eating and drinking in what was effectively a vicious arse-vice.

That shame is something she deals with in the show, but her attitude to it isn’t remotely self-pitying. When a friend who had been at that dinner saw a preview of the show, she was horrified. “She’s like, ‘I’m so sorry, I never thought’ – and I’m like, ‘It’s okay’,” Barron says when we meet in the Standard’s photo studio after her shoot.

“I also never said anything. So it can’t entirely be on you, because I never said it. I just took these moments of discomfort and anxiety and I held them all into myself, which made it really painful and lonely, but I was too ashamed to have those conversations with my friends.”

But surely that’s not on you, I say. “I think it is and it isn’t,” she says. “You want to have close relationships with people and I don’t think I was being really authentic with them either. My weight was definitely me wearing my mental health on the outside. And it was just so visible to people. But I couldn’t expect people to know all these things about me if I wasn’t being honest with them, either.

“And my friends, after I lost all this weight, were going, ‘I didn’t even know this was an issue for you.’ I just thought you were super confident and happy with who you are. You never let it show that you were anything other than that. And that just goes to show how isolating it can be, because it’s all I thought about.”

And yet for the past seven years, at her heaviest (she won’t divulge the weight she reached, but shows me a picture of herself on stage and she genuinely looks like a different woman), she was getting up on stage night after night to do stand up, something most people, no matter their shape or size, wouldn’t dream of doing.

“I wanted to do it since I was a kid,” she says, “but I just didn’t have the guts. And I thought it was one of those things that only famous people did. I didn’t know you could get famous doing comedy.”

She doesn’t come from a performing family, but they were loud and “crazy”. She and her brother and sister were largely raised by her grandmother while her parents worked, and “I was definitely the one being like, ‘Look at me, look at me. I’m the baby.’ That’s why I’m so obnoxious.”

But by the time she realised comedy was something anyone could have a stab at, in her 20s, “I had no self confidence; they would have eaten me alive up there. I couldn’t have done it.” She comes from a family of large people, but her weight gain had crept up on her. “It happens gradually. You just start to get less and less comfortable in your own skin and in the world.”

Ultimately it was lockdown that pushed Barron to the point of drastic action. “I just finally went, ‘Enough.’ And I think it maybe it was Covid, it was not being able to perform, it was being lonely being over here and away from people and distractions.

“I’m very much a ‘go go go’ kind of person. When I first moved here, for the whole first year, I had a full-time job and I was doing around 12 shows a week, still trying to have a social life and make friends in a new city and everything. I just would not allow myself to slow down for a minute. Because if you slow down, you’ll hear your thoughts, basically.” And then Covid hit, and there was nothing but thoughts.

“I just thought, ‘What am I doing with my life? I’m really miserable.’ And eventually, you need to take accountability for that, eventually you cannot blame your upbringing or the poor nutrition we had, or being working class. And my parents, they only knew what they knew, and they were doing their best. And you know, I haven’t lived with them for almost 20 years. So is this really their problem still? Or is it mine? I just had to sort of own that and go, ‘I am still in my 30s; I can choose to get this under control.”’

She didn’t go into it completely recklessly. Barron understood her action was drastic and started getting regular therapy before she made the trip, to cope with the inevitable emotional rollercoaster. “I was like, ‘Alright, what are we going to talk about? My messed up relationship with my family, or my f***boys ?’ And she was like, ‘No, I think the worst relationship you have in your life is with yourself.’ And I was like, ‘Hey, coach, I’m paying you a lot of money. Isn’t this supposed to make me feel good?’”

The therapist was right, though. “I just hated myself. Anything you thought about me, when you saw me as a bigger person, I guarantee you, I thought it, but much, much worse. And that’s how I would talk to myself all the time. I try really hard not to do that now.”

The surgery hasn’t been a magic bullet. Part of Barron’s show goes into the insanely strict diet that she had to adopt after the surgery, and the weird stuff she’s not allowed to do (you can’t chew gum, drink through straws or drink carbonated drinks because it creates too much air in your tiny stomach; all the precious space must be preserved for nutrition). And there are other, less obvious pitfalls. Shopping is still a nightmare, but for different reasons.

“Because I was always bigger, the clothes I would gravitate towards would just be big, black, oversized baggy clothes to hide myself. So now I don’t even know what my style is. I’ll go to Westfield and I’ll get completely overwhelmed. Where can I even start? How do you find your style after [so many] years?”

She’s still getting used to her new self. Even now “I will see a chair now or see a booth in a restaurant, I’ll be like, ‘I’m not gonna be able to fit.’ I’ll catch myself in the mirror sometimes and I don’t even really recognise myself. But I also don’t really recognise who I was before. I look at these pictures sometimes, and I go, who even was she? I don’t feel like her anymore.”

Barron says she’s happier now than she’s ever been. She has just turned 39, and on August 10 “it’ll be seven years since I went up and did my first open mic,” she says, with deserved pride.

She is a little envious, she says, of comics her age who have been on stage for decades, but then says that until she’d lived a bit more she “wouldn’t have had anything to talk about. My [earlier] comedy was very surface. It was about like dating and sex; the easy jokes. This is the first time I’ve ever opened up and have talked about vulnerable things on stage, and really had something to say.”

It seems to be having an impact. Barron’s been developing her latest show on stage, and after one recent gig, “I had a woman who was sobbing. She came up to me afterwards and said, can I just hug you? And I had another guy last night, this really classically handsome man, great physique. And he was like, ‘You probably don’t think it’s true, but I’m telling you, a lot of that shit hit home.’ And I was like, ‘Wow.’ I don’t know why, maybe he has somebody big in his life and he’s never really thought about these things before, or maybe he was a bully, or maybe he had weight issues. I don’t know. But it’s been really interesting to get feedback from people. And I just feel like, because I’m being more real on stage, I think people can feel it, so they’re giving me so much more love and appreciation now.

“How often are people actually that focused, listening to you share your ideas and thoughts? I just think comedy is the most beautiful, pure art form. I love it so much.”

Kate Barron: Losing Myself is at Just the Tonic at the Tron, Edinburgh from August 4-14 and 16-28; edfringe.com