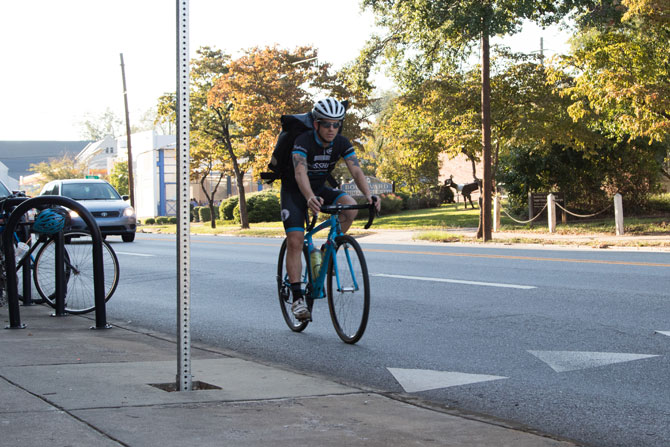 At a lengthy meeting last week, Athens-Clarke County commissioners discussed taking action on a number of controversial issues, including abortion access, the decriminalization of cannabis, a “road diet” for Prince Avenue and long-term plans for both renewable energy and affordable housing.

Some items—like selecting a consultant to work on an affordable housing strategy—are just beginning. Others represent the completion of a monumental amount of work from commissioners, staff and advisory committees alike. This is particularly true for the plans around renewable energy, but also for some other items on this month’s agenda. For example, the Prince Avenue user group has been discussing potential projects for the corridor for over a year, and after much consideration, is proposing a temporary test which would switch a segment of Prince Avenue to a three-lane configuration as a way of improving safety.

During this pilot program, Prince Avenue would narrow to three lanes from Barber Street to Pulaski Street and remain that way for at least 90 days. At that point, commissioners could decide to revert the road back to its current four-lane configuration or to keep it as three lanes permanently, if the pilot showed that traffic was not unduly impacted.

“This is a safety improvement project,” ACC Bicycle-Pedestrian Safety Coordinator Daniel Sizemore told Flagpole. “It’s about slowing speeds down while also not creating too much of a delay.”

The commission will likely vote to approve the pilot project on Aug. 2. Commissioner Melissa Link, who lives near Prince Avenue, is one of the plan’s biggest supporters. She told Flagpole she sometimes goes out of her way to avoid the street out of fear for her safety.

“I see people travel down Prince Avenue at 50 or 60 miles per hour. If we can make physical changes to the road that would prevent people from doing that, we will save lives,” she said.

There have been 184 vehicle crashes on Prince Avenue from Milledge Avenue to Pulaski Street in the past five years, according to data provided by Sizemore. Seven of those crashes resulted in a serious injury, although none were fatal.

Together with commissioners Carol Myers and Tim Denson, Link is exploring whether the pilot program could be extended down Prince almost to Milledge, which is where the street falls under state control. Link also wants to limit the trial period to 60 days, rather than 90 days, so that the experiment can be finalized and made permanent as quickly as possible.

Safety on Prince Avenue would surely be improved once converted to three lanes permanently, but that may not be the only reason supporters want to fast-track the program by limiting the trial to 60 days. Several new commissioners are taking office in January who might be much less friendly to traffic-calming initiatives. These new commissioners could reject a permanent road diet for Prince Avenue even if traffic is not much impacted, a possibility which may have created some urgency for supporters of the plan.

Myers told Flagpole that she agreed with Link on the shorter 60-day timetable, but stressed that the program would not be continued if it caused large traffic delays. “One of the best ways to improve safety is to slow down traffic,” Myers told Flagpole. “But clearly if traffic is backed up so far it causes gridlock, that’s not an option. This pilot will give us evidence, and I’ll support [making it permanent] or not based on that evidence.”

The Prince Avenue road diet will cost at least $85,000 to implement if it stretches from Barber to Pulaski Street, with another $60,000 needed if the pilot program is ever reversed. It would cost significantly more, perhaps up to three times as much, if it extends to Milledge Avenue. The cost would be paid for out of TSPLOST, a one percent sales tax for transportation projects approved by voters in 2018.

Athens may soon join Atlanta, Savannah, Macon and many other Georgia cities in decriminalizing cannabis. The ACC Commission’s Legislative Review Committee recently finalized an ordinance that would allow police the option of giving a $1 fine to those carrying small amounts of the drug instead of making an arrest.

The ordinance has a lot of support among commissioners based on their discussion at last week’s meeting, but the final vote next month may not be unanimous. Commissioner Ovita Thornton in particular has questioned the ordinance’s importance. Thornton pointed out that ACCPD has not made arrests based solely on the possession of small amounts of cannabis since 2019, when the state legislature legalized hemp farming. That’s because, in misdemeanor cases, ACCPD doesn’t have a cost-effective way to test for the presence of illegal amounts of THC, which is the only difference between cannabis and hemp.

“We are not prosecuting people with small amounts of marijuana,” said Thornton. “I am 100% in favor of decriminalizing marijuana, but… we are not putting people through courts and fines. I think the $1 fine is ridiculous. It’s almost a slap in the face.”

Even if passed by the commission, decriminalization of cannabis would require the cooperation of local police and prosecutors to be effective, and the ordinance would be ignored by the Georgia State Patrol in any case.

Nonetheless, progressive commissioners feel that decriminalizing cannabis on the local level makes an important statement. They also want to ensure that ACCPD doesn’t start making cannabis arrests again in the future if the state legislature finds a way to close the hemp loophole.

“I definitely do not trust that our state legislature will not go back and try to fix this [hemp loophole] so that people will be again prosecuted and arrested for this,” said Denson. “It makes sense for us to take action locally before that starts happening.”

Many Athens residents came to this meeting to comment on the decriminalization ordinance. Some spoke in opposition to the measure, saying that cannabis is a gateway to more dangerous drugs, but the majority expressed strong support for the proposal.

The mayor and commission are discussing a resolution to condemn the overturning of abortion rights and affirm the local government’s commitment to “bodily sovereignty” and the right to receive abortion care. The resolution would also instruct police and prosecutors to assign the lowest priority to the enforcement of restrictive abortion laws, such as Georgia’s six-week abortion ban which recently went into effect.

Lastly, the resolution instructs the ACC manager to update the local government’s health insurance plan to include coverage for abortion care, if possible under current law.

Several community members spoke out in opposition to a temporary fraternity house at 347 West Hancock Ave. being considered at this meeting. The planning commission unanimously recommended that the ACC Commission approve the UGA fraternity’s request, which would convert a vacant office building to house eight students. The planning commission recommends that the special use permit be granted for one year only, which allows the fraternity time to find a permanent home.

Despite the temporary nature of the request, nearby residents strongly objected to allowing more UGA students to move into their neighborhood, citing concerns about noise and parking. “We’re already overrun by students,” said one speaker.

Link also had concerns about the proposal. “There are already serious parking issues. I get calls all the time about noise violations, wild parties, and the trash on the Hancock corridor is horrible,” she said.

Furthermore, Link objected to the intrusion of white fraternities into a historically Black neighborhood, comparing it to the forced displacement of Black Athenians during the urban renewal period of the 1960s. “The utter displacement of the original residents of this community by an over-privileged transient population is similar to Linnentown. This is Linnentown 2.0.”

The commission will make the final decision on the fraternity and other items discussed at the voting meeting on Aug. 2.

Finally, Mayor Kelly Girtz has instructed the Government Operations Committee to consider new limitations on short-term rentals such as AirBnBs. He wants them to consider limiting the number of short-term rentals any one individual could manage, and also to consider requiring that those offering such rentals live within Athens-Clarke County as a homestead owner.

Like what you just read? Support Flagpole by making a donation today. Every dollar you give helps fund our ongoing mission to provide Athens with quality, independent journalism.