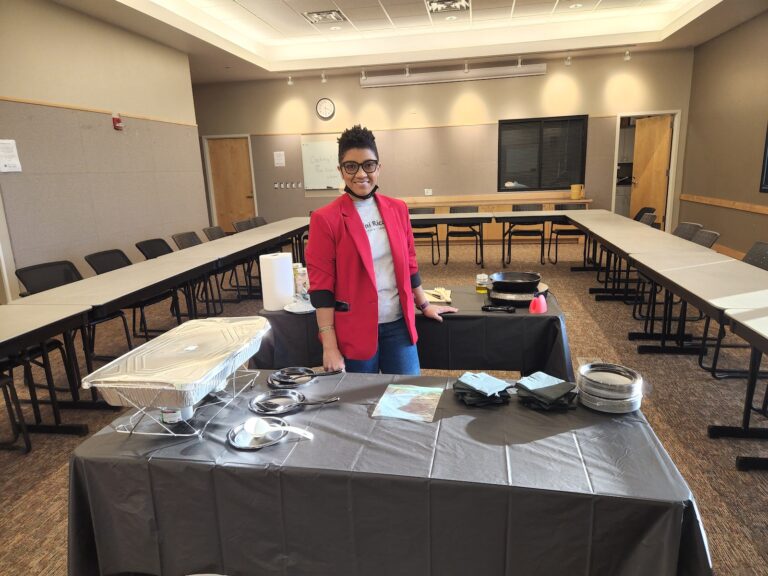 The Local newsletter is your free, daily guide to life in Colorado. For locals, by locals. Sign up today!

When the COVID-19 pandemic shut down the world in March 2020, the Hemlee family huddled around a dry-erase board in their Denver home. Cecilia, who lived in Puerto Rico until 2002, and Josh, a native of Trinidad and Tobago, were trying to come up with a name for their long-dreamt-about project: a program to promote their passion for the planet, mindfulness, and food. With help from their two sons, 13-year-old Ismael and 10-year-old Mateo, they scribbled and scrubbed away a few different ideas until the boys said: “Wait … we are Trini Rican.” The name stuck, and the business was born.

Through Trini Rican Vegan, Cecilia and Josh create recipes familiar to the West Indian community with a vegan twist and share them via a blog, YouTube channel, and social media. Examples include tacos with pulled pork-esque jackfruit seasoned with tumeric, cilantro, and cumin, or lard-free pan sobao, a semi-sweet bread that’s a staple side dish of Puerto Rico. The couple went vegan about six years ago after a years-long stint as vegetarians, and their recipes are inspired by family recipes and their Caribbean heritage.

“For Trini Rican Vegan, we wanted to show people that they can still have flavor profiles that are similar to those in our countries of origin, while at the same time being mindful of our planet,” Cecilia says. “[Trini Rican Vegan] will be a way of sharing with others that we can have a mindful life while enjoying all of our Caribbean herbs and spices and all of the comforts that the West Indian diet brings to us.”

Josh and Cecilia met in Puerto Rico in 1998, where Josh came to study for a Spanish language degree. The couple began experimenting with a more plant-based diet, and they moved to the continental U.S. in the early 2000s. The two spent time in Columbia, South Carolina, where they had their children and continued their vegetarian diet. But when the couple moved to Denver in 2013, they decided to commit fully to a vegan lifestyle.

“We were in Columbia, which is very traditional with their food, and I always felt other,” Cecilia says. “I didn’t feel like I could live my authentic self, and I was always making excuses whenever we went to restaurants and cookouts not to upset others by my dairy-free requests. And it wasn’t until I moved here to Denver that I said, ‘You know what? Let’s just do what we want to do.’ And little by little we shed all remnants of the vegetarian diet and moved into a vegan lifestyle.”

After founding Trini Rican Vegan, the Hemlees began uploading their original recipes and cooking tutorials to their website and social media accounts. Some of their favorite recipes are for curried red lentils with basmati rice and sweet fried plantains; spicy red beans, a Caribbean Sunday lunch staple packed with flavor from green peppers, garlic, paprika, and sofrito; and, of course, their ever-popular jackfruit tacos. In December 2021, Trini Rican Vegan hosted their first cooking workshop virtually with Denver Public Library to celebrate Kwanzaa, and more demonstrations at the Denver and Broomfield Public Libraries (both in-person and virtually) have followed throughout 2022.

The duo’s mission? It’s far-reaching. It’s partly to educate foodies about the vegan lifestyle, partly to share West Indian cuisine with the Denver community, and partly to bring different cultures (say, Trinidadian and Puerto Rican) together. And while they’ve started with coconut bake, a Trinidadian breakfast bread made sweet with nutmeg and cinnamon, and callaloo, a Trinidadian Sunday lunch staple made of leafy greens, okra, and other veggies, the Hemlees don’t see Trini Rican Vegan stopping with brunch fare.

While Trini Rican Vegan doesn’t serve food to the community, Josh and Cecilia are currently working on a cookbook featuring their go-to vegan Caribbean recipes. The publish date is still to be determined, but here’s one of Trini Rican Vegan’s recipes you can bake ASAP.

This soft, slightly sweet island bread is a popular complement to home-cooked meals.