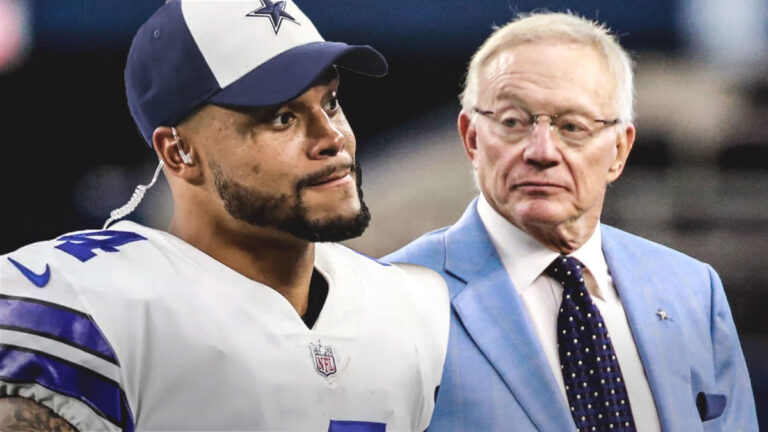 “I’m in the best shape of his life,” the Dallas Cowboys QB recently told us. “I’ve trained more functionally than I ever have. … So, I see it in my body, I see it the way I move and how the ball is coming out.”

But the Jones family – valuing his $40 million APY quarterback at Tuesday’s camp-opening presser with COO Stephen saying, “We’re blessed to have a franchise QB in Dak Prescott” – meanwhile revealed a plan of caution, even though Prescott is fully healthy for the first time in almost two years.

Said owner Jerry Jones: “Well, I don’t want to see him throw a ball halfway the length of the field and strain something out here the third day. And, so, that’s for starters right there, and I don’t think we’ll see that.”

That is a specific reference to what might have occurred last summer, when Prescott, coming off his horrific ankle injury and surgery, sustained a mild shoulder injury, possibly while tossing a Hail Mary pass in workouts.

This is still football, though, and the quarterback cannot entirely be placed in bubble wrap. Under coach Mike McCarthy, the QBs wear red jerseys, a hands-off reminder for the defense. And wear and tear is monitored daily, to the point where Prescott and other veterans might take sessions off throughout the summer.

Yet at the same time, a leaner Prescott (see “No More Baby Fat”) plans on being a more mobile Prescott, a game-plan feature that should begin showing itself in these workouts. The hope is that the work he’s doing on his body – made more possible by full health following a year of ankle rehab, a sore shoulder and a calf injury – has moved him to a new level.

“It’s a product of working on everything,” said Dak, who said he has confidence right now that is “through the roof.’‘ “Whether it be rotation, whether it be diet or whatever, just focused on every way I can get better.“

Can a “franchise QB” get better? That’s the plan. That’s the need … even as the team is careful about exposing him.