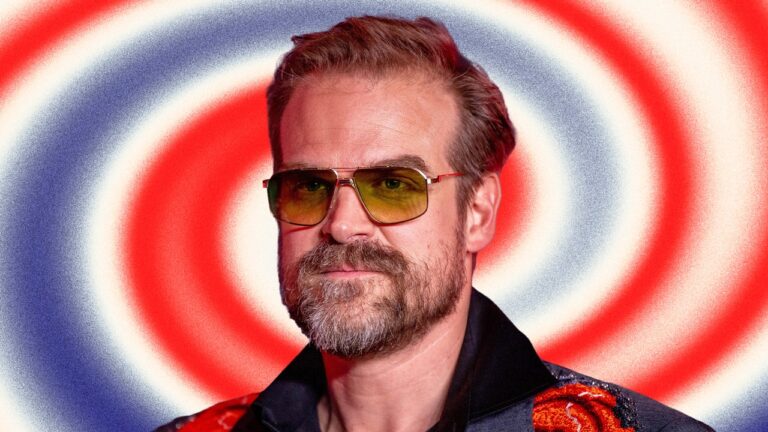 A lot has changed since the third season of Stranger Things premiered in the summer of 2019— especially for David Harbour. The actor, who plays the burly father figure Jim Hopper on the Netflix hit, lost over 70 pounds (!) in preparation for his big reveal in the latest season when—spoiler alert!—after surviving a massive explosion, Hopper emerges locked up in a Soviet gulag, looking mean and lean.

The transformation wasn’t just a physical one. When the pandemic hit and filming stopped, Harbour incorporated long runs into his workout routine, which he says helped both keep the weight off and his anxiety. Through the process, he says developed an entirely new relationship with his body and mind. GQ caught up with Harbour to talk about how he dropped all that weight, partnering with the hardcore running brand Brooks, and how all this physical activity has helped him feel more sane.

GQ: For the latest season of Stranger Things you went through quite the transformation. How many pounds total did you lose and what was that timeline like?

David Harbour: I think the total was like 75 pounds. I started out like 265 and went down to 190. The timeline was sort of strange because the pandemic interrupted it. I lost the big bulk of it in about three months. I lost like 45 or 50 pounds in 3 months, and then the rest was a slow burn. Another four months and I had to maintain it for a year while we were waiting to shoot again. It was funny: When I started, it was sort of easy. As you lose more and more weight, it’s much harder because your body is like, we gotta stop doing this. But in the beginning it was liberating.

During those first three to four months, what did your day-to-day eating and workout routine look like?

I did a lot of intermittent fasting, which I know is sort of the diet of the moment, but it really did work for me. I don’t know if it’s just code for starvation but it’s basically like… I was hungry a lot of the time. In general I think it’s calorie intake, calorie outtake. I don’t think there’s anything that much more mysterious. But it was fun to have this fetish, this intermittent fasting. We would do like six hour windows and like two days a week I would do 24-hour fasts because I started to get more and more intense.

I would do a mixture of resistance work and cardio. The cardio was a lot of running but with very low intensity over an extended period of time, around 60 to 90 minutes at a heart rate of about 165. That was something that was en vogue a while ago, but now everything has become high-intensity training and that that kind of working out has lost its luster. But I’ve found that not only did it help me physically with losing weight, but also mentally. It really helped with my anxiety and my breathing rate. You get about 40-45 minutes in and my breathing would just slow down and I just became more relaxed.

I did a lot of Pilates too, and some weight training. What I was looking for was that lean look. He’s strong but he’s been emaciated, so the Pilates really helped with that lean thing, like strengthening, lengthening, and stretching the muscle a lot.