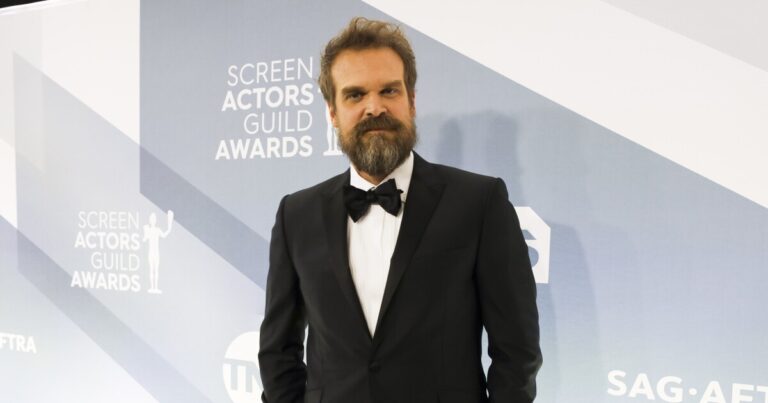 The kids of Netflix’s “Stranger Things” weren’t the only ones who experienced major physical transformations on the hit Netflix series.

Millie Bobby Brown, Finn Wolfhard and the other teenage protagonists went through puberty in front of audiences’ eyes, but David Harbour turned heads when he appeared significantly slimmer in Season 4.

On Thursday, Harbour, who portrays the beloved Hawkins sheriff Jim Hopper, revealed that he lost about 80 pounds — down from 270 pounds to 190 — to attain Hopper’s latest physique.

“My trainer @davidhigginslondon worked with me for 8months to make the transformation, and then another year to keep it through the pandemic,” the “Hellboy” star wrote in an Instagram post. “All told it was a difficult and exciting ride, changing diet and exercise plans (or lack thereof).”

In the latest season of the sci-fi hit, Harbour’s character dropped his beloved “dad bod” when he became a prisoner for the Russians and worked in a labor camp.

In his Instagram post, Harbour shared three photos of his weight-loss journey. The first was a photo collage of two drastically different Hoppers before and after the labor camp, the second a pic of Harbour working out with his trainer and the last was a snap of Harbour quite literally flexing the fruits of his labor.

He also added that “Stranger Things” isn’t the only Hollywood project that will reap the benefits of his physical transformation. He gained weight again to portray Santa Claus for another title.

However, Harbour admitted the weight fluctuations might not be sustainable for him.

“All this up and down is not good for the body, and I’ll have to give it up soon,” he added, “but it is such a fun part of the job to live in a different version of your skin for a while.”