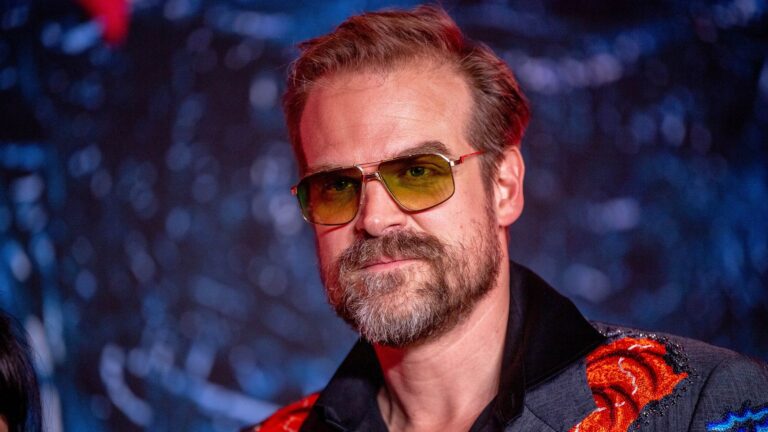 David Harbour is done being pestered about his “Stranger Things” weight loss — and finally let fans on social media know what he’s been going through.

Harbour said he lost nearly 80 pounds as his character, Hawkins police chief Jim Hopper, withered as a Russian prisoner, according to Insider. He posted before and after photos on Instagram Thursday and talked about his grueling diet and exercise program.

“Many of you have asked me about Hopper’s physical transformation from season 3 to season 4,” Harbour wrote in the caption. “My trainer @davidhigginslondon worked with me for 8 months to make the transformation, and then another year to keep it through the pandemic.”

Season 4 picked up eight months after Season 3’s “Battle at Starcourt” finale, which saw Harbour’s character captured and imprisoned by Russians. Viewers were stunned to see Hopper return transformed — from a 270-pound local law enforcer to a Siberian gulag inmate of 190 pounds.

The first images in Harbour’s post were a collage chronicling his physical change for the show’s latest season. The actor confessed that “it was a difficult and exciting ride, changing diet and exercise plans (or lack thereof).”

He continued: “Second pic is me and David the week we began, my resistances and fury flaring. And pic three is the shoot day … All told I lost over 75lbs. 265-270 in season 3 and all the way down to 190 when we shot.”

The actor revealed that he “recently ballooned up again” to play Santa Claus in an upcoming movie called “Violent Night” — and is “struggling to fight back down towards a good weight.”

“All this up and down is not good for the body, and I’ll have to give it up soon, but it is such a fun part of the job to live in a different version of your skin for a while,” wrote Harbour.

For “Stranger Things” fans who immediately binged the latest episodes and can’t wait for more, co-creator Ross Duffer recently revealed the lapse between seasons should be much shorter this time. Shooting hasn’t yet begun, but Season 5 is already fully mapped out.

“We’re going to take a little vacation in July,” Duffer told Collider. “And then we’re going to come back. I know that the writer’s room is going to start in that first week of August.”

If you’re struggling with an eating disorder, call the National Eating Disorder Association hotline at 1-800-931-2237.

These diet tips can help manage this hormonal condition in women