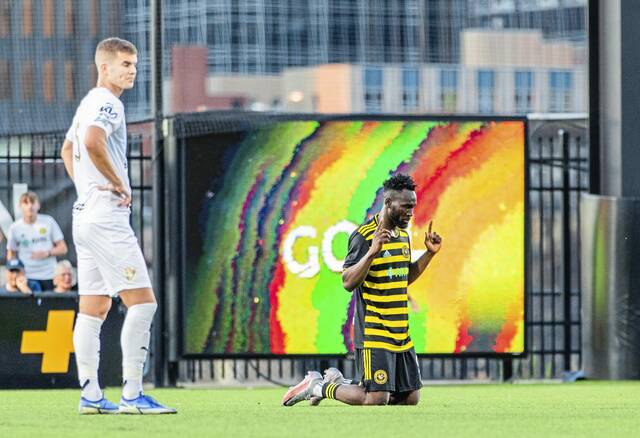 Albert Dikwa doesn’t have any issue using his powerful right leg to drill shots on target, but Saturday night he used a little finesse to score the goal the Riverhounds needed.

Dikwa got a pass from Alex Dixon in front of goal and slipped a shot into the bottom left corner in the 55th minute for a Riverhounds in a 1-0 victory over FC Tulsa at Highmark Stadium.

It was Diwka’s seventh goal of the season, which is a career high and is tied for second on the team.

“In training they always say to me, ‘Hit it hard,’ but I am just trying to hit the target,” Dikwa said. “Luckily, that one went in.”

It’s been a resurgent season for Dikwa, who missed a lot of time last year because of injury. He made some changes after last season, including trying a vegan diet and has made 20 appearances in 2022.

“I’m not vegan currently, but after my surgery last year I went vegan for eight or nine months, and I think that helped me a lot,” Dikwa said. “One thing Coach Bob (Lilley) always tells me is to listen to my body. I would do a lot of extra work last year and maybe not listening to my body. Now I’ve been getting more rest and our trainer Kyle (Patrick) has been keeping me healthy. He’s been my savior. I’m grateful to have him around me and he’s really become my best friend.”

The win capped an undefeated July for the Riverhounds at 5-0-1, basically erasing their winless June. They have 40 points, which is third in the USL Championship Eastern Conference.

“It was a big improvement on June for sure, and tonight was important,” Lilley said. “It was a good result, but I would’ve liked to see us be better on the ball. I didn’t think we passed the ball particularly well all night. We started the first half really well, but there were moments where we chasing the ball because of turnovers. At halftime we talked about cleaning it up a little. We were able to get the goal and created some chances to get a second goal, but didn’t.”

They did have to dodge two prime scoring chances for Tulsa in extra time. A heavy touch by Machuca squandered a chance at goal early in extra time. Machuca then had a point-blank shot go over the bar on a counter attack moments later.

“It wasn’t the best finish for us,” Lilley said. “The last 15 minutes they had three or four dangerous chances that didn’t connect, not just the last one where he was in clean. Hopefully the next time we’re in that situation we can close out the game a little better.”

Mertz came to the team via transfer from Atlanta United II last week and had an assist in his debut last Saturday in Hartford.

He played with the Riverhounds from 2019-20 before joining Atlanta United II, with hopes he would earn a spot on the MLS club.

But after chasing that goal, he’s happy to be back in his hometown and received a loud ovation from a large crowd when he was announced in the starting 11.

“To be honest, coming out of the tunnel I had the chills before they announced my name,” Mertz said. “The reception was awesome. I didn’t think that was something that I’d ever experience, having that kind of welcome from any crowd, and it’s a moment I’ll remember for a long time.”