Dipping into a varied diet 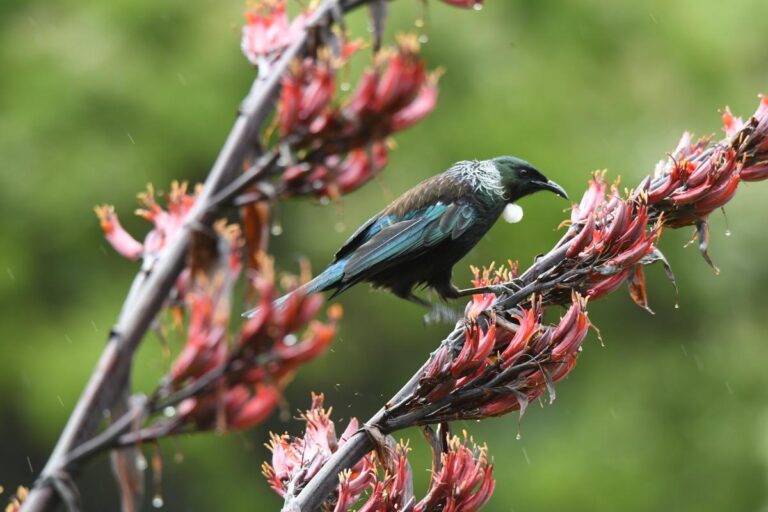 Peter Hill, of Mosgiel, asked: Having watched tui feeding in our garden, we would like to know how nectar-eating birds feed their young.

Quite a number of native New Zealand birds eat nectar (as well as sugar water put out by people). The most obvious in people’s gardens are tui, bellbird (korimako) and silvereye (tauhou), but there are others, such as kaka and stitchbird (hihi), with more restricted distributions. These birds forage for nectar from a large variety of native flowering plants, such as kowhai, tree fuchsia (kotukutuku), rewarewa, pohutukawa, rata and flax (harakeke), as well as introduced species, such as banksia, eucalypts and tree lucerne.

Tui and bellbird are members of a family of birds known as honeyeaters, of which there are dozens of different species in Australia. In spite of looking very different, tui and bellbird are each other’s closest evolutionary relatives. Hihi were once thought to be another honeyeater species, but genetic research has shown them to be the only member of a separate family found only in New Zealand.

Kaka, too, belong to an endemic family (along with kea and kakapo), and are very fond of the honeydew produced by scale insects in beech forest. By contrast, the silvereye is also found in Australia and became established here just under 200 years ago, probably blown across the Tasman during a storm.

However, none of these birds rely solely on nectar. All eat a variety of foods, most commonly small berries and invertebrates, especially insects and spiders. Moreover, just what they eat varies from season to season. Insects, which contain significant protein, are particularly important during the breeding season. Indeed, most “nectar-feeders” actually feed their chicks a diet consisting largely of insects to ensure they grow quickly.

There is nothing like a good meal provided by mum or dad!

—  Have a question you’d like answered? Email to question.aas@gmail.com.