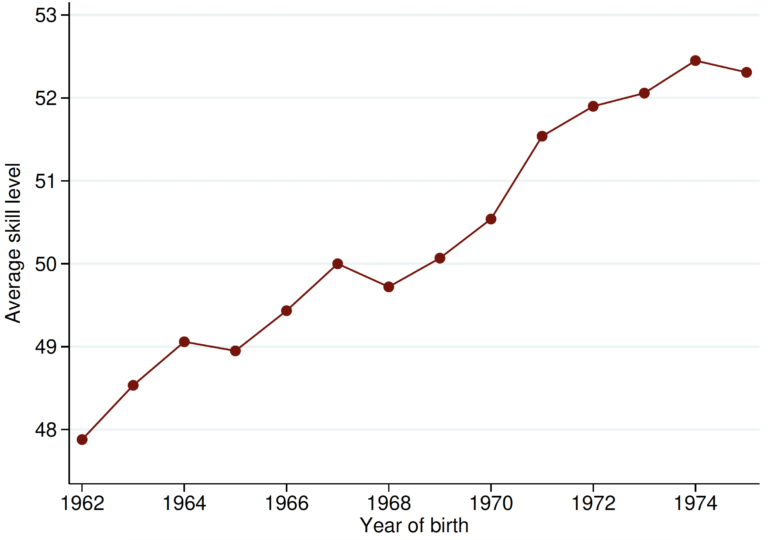 Figure 1 shows trends in performance on a logical reasoning task among men in Sweden born between 1962 and 1975. The data come from tests taken at military enlistment around age 18 or 19. Because enlistment was compulsory and the tests were unchanged over time, these data give us an unusually clear picture of population trends in cognitive skill for men.

Notes: The figure depicts the average logical reasoning score for each birth cohort, expressed as a percentile of the 1967 birth cohort, based on tests taken at military enlistment around age 18 or 19.
Source: Adapted from Figure I of Hermo et al. (forthcoming).

The secular rise in ‘fluid intelligence’, or reasoning skill, has been called the ‘Flynn effect’ in honour of James Flynn, who did pioneering work on this topic beginning in the early 1980s (Flynn 1984, 2007, 2012). As Figure 2 shows, the Flynn effect is a very broad phenomenon, occurring across many developed countries (Pietschnig and Voracek 2015). It has been documented before using Swedish military enlistment data, for example by Rönnlund et al. (2013), and is related to patterns documented in other contexts, for example by Jokela et al. (2017).

Notes: The figure depicts the annual change in fluid IQ points for each of a set of country studies, drawn either from Pietschnig and Voracek (2015, Table S1, circles) or from the military enlistment sample that we study (triangle).
Source: Adapted from Online Appendix Figure 9 of Hermo et al. (forthcoming).

What explains this pattern? Cognitive scientists have tended to emphasise factors, such as improvements in health and nutrition, that economists would recognise as increasing the supply of skill (e.g. Pietschnig and Voracek 2015, Rindermann et al. 2017). But these explanations have proved incomplete, in part because it is difficult to find evidence of sufficient changes in health, nutrition, and other factors that can explain such large gains in test performance in contexts, such as Sweden, with highly developed economies and comparatively healthy populations. For this reason, the Flynn effect is viewed by some as an enduring puzzle. One authoritative review, for example, says that “[i]f there were a prize in the field of human intelligence research, it might be for the person who can explain the ‘Flynn effect’….” (Deary 2020).

In a forthcoming article (Hermo et al. forthcoming), we study whether economic incentives have a role to play in explaining the evolution of cognitive skills across birth cohorts.

A role for economic incentives?

Figure 3 shows trends in the estimated labour market return to a one-percentile-point increase in measured fluid intelligence across the birth cohorts that we study. In line with prior research (Castex and Dechter 2014, Markussen and Røed 2020, Edin et al. 2022), we find that this return declined across cohorts.

Notes: The figure depicts the estimated lifetime skill premium, expressed in natural logarithms, for a one-percentile-point increase in logical reasoning skill for each birth cohort.
Source: Adapted from Figure I of Hermo et al. (forthcoming).

Taken on their own, Figures 1 and 3 seem to bear out the emphasis in cognitive science on factors that change the supply of skills. An increase in the supply of cognitive skill – say, due to improvements in health or nutrition – would increase the quantity of skill (Figure 1) and decrease its market value (Figure 3), very much in line with the patterns we observe.

The picture changes, however, when we examine a second dimension of cognitive skill. Figure 4 presents trends in the level of vocabulary knowledge across the cohorts that we study. Vocabulary knowledge is a common measure of ‘crystallised intelligence’, or domain knowledge, which is often found to have grown more slowly than fluid intelligence, or even (as we see for Sweden), declined across cohorts.

Notes: The figure depicts the average vocabulary knowledge score for each birth cohort, expressed as a percentile of the 1967 birth cohort, based on tests taken at military enlistment around age 18 or 19.
Source: Adapted from Figure I of Hermo et al. (forthcoming).

The decline in crystallised intelligence suggests forces at work beyond generalised improvements to health, nutrition, and other supply-side factors. Could incentives play a role?

Figure 5 suggests that they might. The figure plots the change in the relative level of logical reasoning and vocabulary knowledge performance against their relative return. The two are strongly positively associated across cohorts, suggesting the possibility that the level of different skills is adjusting to their different returns in the labour market.

An economic model of skill investment

We have developed an economic model of skill investment (Hermo et al. forthcoming). In the model, members of a given cohort make skill investment decisions taking into account their expectations of future labour market returns to different skills. We show how to use the data in Figures 1, 3, 4, and 5 to estimate the key parameters of the model, and thereby to decompose trends in skill levels into components driven by changes in economic incentives (as proxied by labour market returns) and changes in the supply of skills (due to health, nutrition, and the like).

Notes: The “Actual” series depicts the average logical reasoning score for each birth cohort, expressed as a percentile of the 1967 birth cohort, based on tests taken at military enlistment around age 18 or 19. The “Holding labour market returns constant” series depicts the counterfactual series if skill premia remained constant at the level estimated for the 1962 birth cohort.
Source: Adapted from Figure IV of Hermo et al. (forthcoming).

The role of parents and schools

According to our analysis, skill investments respond to economic incentives. But who is responding? We investigated the roles of two important actors in the skill investment process: parents and schools.

Figure 7, which uses data from an original survey of Swedish parents, shows that parents of more recent cohorts of children tend to regard reasoning as more important than knowledge, as compared to parents of earlier cohorts. Although Figure 7 does not prove that changes in parents’ emphasis arise from changes in economic incentives, it does suggest that parents’ emphasis on different skill dimensions changes over time.

Figure 8 shows similar evidence for schools, using data from an original text analysis of Swedish primary school curricula. Terms relating to reasoning or analysis have become more common over time than terms relating to knowledge or memorisation, in line with a large body of pedagogical research that studies these curricula qualitatively (Larsson 2011, Johansson and Wickman 2012, Prytz 2015, Dahlbäck and Lyngfelt 2017).

Changes in the demand for skills

James Flynn wrote that “[w]hen society asks us to increase our use of any skill over time, the brain responds” (2018: 79). Figure 5 suggests that, over time, the labour market is placing increasing emphasis on reasoning skill as opposed to knowledge. Why?

Analysis we report in our article suggests that this trend may originate in part with changes in the nature of tasks in the workplace (Hermo et al. forthcoming). Occupations that are especially intensive analytically (such as those relating to computers) have grown at the expense of others (such as sales work) that are more demanding in terms of domain knowledge.

The stock of human capital plays an important role in economic growth and prosperity (e.g. Bishop 1989, Toivanen and Väänänen 2013, Aghion et al. 2017). Cognitive scientists studying population trends in measured intelligence have tended to emphasise the role of factors affecting the supply of skills. Our analysis suggests that the mix of skills in a society also evolves in response to the society’s demands and suggests the value of economic reasoning in the study of population trends in measured intelligence.

Prytz, J (2015), “Swedish Mathematics Curricula, 1850-2014: An Overview”, Proceedings of the Third International Conference on the History of Mathematics Education 309–326.

Rindermann, H, D Becker, and T R Coyle (2017), “Survey of Expert Opinion on Intelligence: The FLynn Effect and the Future of Intelligence”, Personality and Individual Differences 106: 242–247.