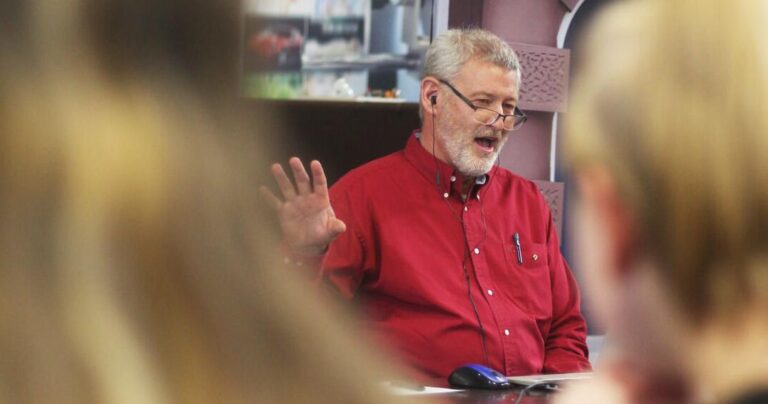 Schroeder has depicted the change in multiple statements as forcing schools to comply with a federal agenda of “social engineering” in order to continue receiving federal money that pays for school meals. He implied that the change would allow “boys in girls’ locker rooms” and was meant to pave the way for “boys in girls sports” and the “forced usage of pronouns.”

But emails that the Star-Tribune obtained from the Wyoming Department of Education through a public records request show that, behind the scenes, Schroeder had received guidance indicating the change was just meant to allow students to file complaints if they were denied a meal because of their sexual orientation or gender identity.

The USDA Food and Nutrition Service announced May 5 that it would reinterpret federal protections against sex discrimination to include sexual orientation and gender identity.

That reinterpretation is based on the 2020 U.S. Supreme Court decision in Bostock v. Clayton County, which held that that the prohibition on sex discrimination under Title VII of the 1964 Civil Rights Act covers discrimination based on sexual orientation and gender identity.

Under the change, any organization that gets money from the Food and Nutrition Service is supposed to “investigate allegations of discrimination based on gender identity or sexual orientation” and “update their non-discrimination policies and signage to include prohibitions against discrimination based on gender identity and sexual orientation,” according to the May 5 statement. The policy update was effective immediately, although the USDA is allowing some flexibility around the timeline for organizations to make those updates to their policies and signage, according to a USDA spokesperson.

Wyoming participates in several Food and Nutrition Service programs, including the National School Lunch Program and the School Breakfast Program. The state gets federal money to pay for those programs.

“Program operators who fail to comply will be in violation of civil rights laws and in breach of the agreements they signed in order to receive federal funds,” the spokesperson said in an email to the Star-Tribune. “At that time, USDA will interpret the prohibition through traditional compliance and discrimination complaint mechanisms, which could include up to referring the case to the U.S. Department of Justice (DOJ).”

The emails obtained by the Star-Tribune offer insight into how department leaders responded to the federal policy change.

On June 2, Schroeder responded to an email from department spokesperson Linda Finnerty that included a link to the May 5 USDA announcement.

“My own view: the only updating of our non-discrimination policies and signage that needs to happen (if at all) should include prohibitions based on the humanity of a person, not on sexual identity issues [sic] which fits their worldview and value system but [sic] conflicts with the majority of Americans,” Schroeder wrote. “Otherwise, if that doesn’t work for the feds, we reject their money.”

Deputy Superintendent of Public Instruction Chad Auer sent out an email to local school superintendents on the same day letting them know that the department was working with state agencies to “evaluate the implications of the USDA’s recent action.”

The following day, the Department of Education issued a blistering statement on behalf of Schroeder, in which he denounced the USDA’s reinterpreted nondiscrimination protections and accused the federal government of tying “the school lunches of little kids to its ever-relentless agenda of social engineering.”

A blistering statement from Wyoming’s schools superintendent is again fanning the flames of debate over gender identity and sexual orientation.

Schroeder didn’t mention that the Department of Education was still looking into the impact that the USDA’s nondiscrimination update could have on Wyoming schools.

He added further on in the statement that the USDA’s reinterpretation conflicts with “the majority of Wyomingites [sic] who’s faith or common sense inform them differently.”

In 2014, a University of Wyoming survey found that 53% of respondents agreed and 39% disagreed with the statement that gay marriage should be allowed. Another statewide poll from 2014 showed that 62% of respondents said they favored adding sexual orientation and gender identity to Wyoming’s employment non-discrimination law, according to the Williams Institute at the University of California, Los Angeles. The Public Religion Research Institute, a nonprofit research organization, found in a 2017 survey that 66% of respondents favored adding LGBTQ nondiscrimination laws.

(Finnerty later said in a June 9 email to the Star-Tribune that Schroeder’s statement about the “majority of Wyomingites” was “based on Wyoming’s voter roles reflecting it is a primarily conservative, republican state”).

The day after the Department of Education released Schroeder’s statement, an education advocate who has worked with the department sent the agency an email expressing concerns about Schroeder’s messaging around the USDA’s nondiscrimination update. Finnerty forwarded that email to Schroeder and Auer.

The advocate pointed out specifically that Schroeder’s portrayal of the Biden administration’s role in the USDA update could be misleading.

To be clear, Biden did sign an executive order in January 2021 that directs government agencies to review and revise policies so they align with the previously mentioned Bostock decision. The USDA also says explicitly in its May 5 statement that the nondiscrimination update “is in line” with Biden’s executive order.

But Schroeder didn’t mention the Bostock Supreme Court decision in his first statement. Neither did he point out in his subsequent statements that Justice Neil Gorsuch, who was appointed to the Supreme Court by former president Donald Trump, wrote the majority opinion for that case.

The advocate wrote in closing that “misleading communications like this one will make it harder for (Schroeder) to get elected.”

The superintendent of public instruction post is an elected position. But Schroeder wasn’t elected. Gov. Mark Gordon appointed him to the position in January after former superintendent Jillian Balow took a similar job in Virginia. His appointment ends this January. Schroeder is running for election to the post against five other candidates. Next month is the Republican primary.

The Wyoming Department of Education issued another statement on June 8, reiterating that Schroeder stood by his denouncement of the USDA updates. That statement addressed the Bostock decision and Biden’s executive order.

Following that statement, a department official shared with fellow administrators a June 16 email from the Council of Chief State School Officers — a nonpartisan, nonprofit organization made up of people who head K-12 education departments in the U.S. — that outlined the council’s understanding at the time of the USDA nondiscrimination update and its impact for Wyoming schools. The council clarified that this guidance was “unofficial information” and that it shouldn’t be considered legal advice.

“Our understanding is that this non-binding guidance is specifically related to ensuring students cannot be denied a meal or separated from other students in a cafeteria setting based on their gender identity or sexual orientation,” a representative of the council wrote in the email.

The representative added that, per the council’s understanding at the time, the USDA’s updated requirement was “not intended to be related to laws or policies that may be related to student use of bathrooms, ability to play sports, etc.”

A USDA spokesperson later confirmed with the Star-Tribune that the update only relates to discrimination around Food and Nutrition Service programs.

“The change gives recourse for LGBTQ+ Americans who experience discrimination by or within a Food and Nutrition Service Program,” the spokesperson said in an email. “If discrimination does occur, that person can now file a complaint of sex discrimination—nothing more.”

Finnerty had also responded along these lines to a member of the public, who wrote in a June 9 email to the education department that “our young women deserve to feel safe when using the bathroom.”

“This update to the USDA non-discrimination statement does not have any connection to bathrooms in the schools,” Finnerty wrote in response. “It relates only to food services.”

But in his most vitriolic June 22 statement on the topic, Schroeder still suggested, albeit implicitly, that the USDA’s update would impact other areas of school activity.

Wyoming’s top schools official says the state “will not comply” with federal requirements to change non-discrimination policies and called on the state to reject federal money tied to lunch programs.

“Vulnerable children will not go unfed in Wyoming, and we will not allow boys in girls’ locker rooms,” he said. “We categorically reject gender ideology and will not bow to the coercive will of a bully government.”

He implied further on in the statement that the USDA’s updated requirement will eventually lead to “boys in girls sports, forced usage of pronouns, etc.”

The Star-Tribune asked Schroeder why he suggested that the USDA’s nondiscrimination update would impact who plays on which sports teams, who uses which locker rooms and the usage of pronouns, when the guidance he received behind-the-scenes suggested otherwise.

He responded to the question in an email relayed through Finnerty.

“Wyoming has a right to govern its own schools without agendas from outside the state,” he said in the email.

The Star-Tribune also asked Schroeder to comment on the seeming contradiction between his assertion that “vulnerable children will not go unfed in Wyoming…” and the USDA’s aim to provide extra protections so that kids’ participation in a Food and Nutrition Service program isn’t denied or impacted because of their sexual orientation or gender identity.

“I stand by my comment,” Schroeder responded in the email.

He said that he has “the interests of all Wyoming children in mind as well as their parents.”

When asked if he had consulted with other entities about the real-world impact of the USDA’s nondiscrimination update, Schroeder said that he’s “coordinating with other states.”

He didn’t say whether he had received other guidance that contradicted the Council of Chief State School Officers’ understanding of the USDA’s nondiscrimination update and its implications for Wyoming schools.

“What the USDA will ultimately do is yet to be determined,” he said in response to the question.

It doesn’t appear that Schroeder has taken steps to learn about the experiences of Wyoming’s LGBTQ students.

“When speaking with students I do not inquire as to their sexuality,” Schroeder responded when the Star-Tribune asked if he had taken steps learn about LGBTQ students in Wyoming.

Get local news delivered to your inbox!