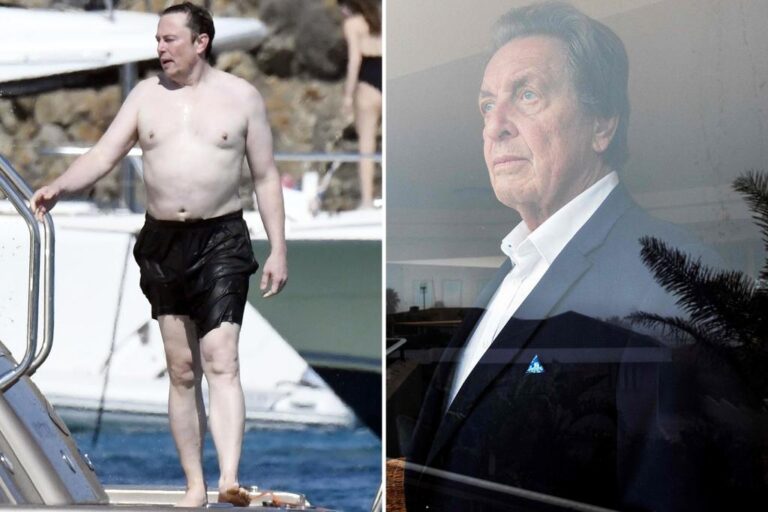 Elon Musk’s dad on Monday revealed that he urged his billionaire son to take diet pills to lose weight after seeing his recent photos of him frolicking shirtless on a yacht in Greece.

Errol Musk took a swipe at his eldest child’s appearance during a 20-minute, no-holds-barred interview with the Kyle and Jackie O show on the Australian radio station KIIS FM.

“Elon is very well-built and he is very, very strongly built, but he’s been eating badly,” Errol opined, adding that he has recommended that his eldest son take a weight loss pill called garcinia cambogia, which he claimed has helped him shed a few pounds.

Elon, a single father of nine, caused a stir on social media when he was photographed in mid-July while vacationing in the Aegean Sea with top talent Ari Emanuel and his new bride, Sarah Staudinger, on a $20,000-per-week motor yacht.

When the barrel-chested businessman’s topless snapshots went viral, the outspoken SpaceX boss took the barrage of online comments about his appearance in stride, joking that he needed to take his shirt off more often.

“Haha damn, maybe I should take off my shirt more often … free the nip!! (already back in the factory btw),” the Tesla mogul tweeted.

Responding to a tweet defending his appearance a few days later, Elon wrote: “Tbh, it’s good motivation to work out, eat healthier & maybe take my shirt off outside more than once a year haha.”

In the elder Musk’s interview on Monday, the 79-year-old downplayed Elon’s success — and instead touted the accomplishments of his younger son, restaurateur Kimbal Musk, whom he called his “pride and joy.”

The eccentric South African engineer said that at age 50, Elon is already “an old man,” and that he was worried that his son would not find a partner to be with him all the time.

Errol himself has seven children by different women, including his youngest son and daughter, whom he shares with his 34-year-old stepdaughter-turned-lover.