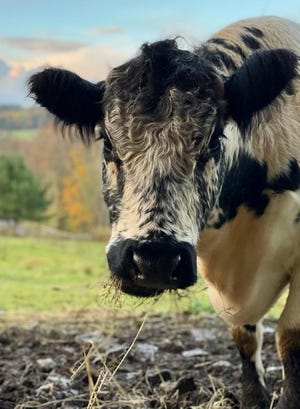 Miriam, a 2000-pound beef cow, spent the first few years of her life alone, frightened and living in the woods outside a farm in Oregon.

She was too big to move to slaughter, so she was abandoned and left to fend for herself. Then she was rescued.

Today, she spends her days grazing, relaxing and hanging out with her fellow cow pal Penelope and some male alpacas who all live at the Happy Compromise Farm + Sanctuary in Waverly.

“Miriam just loves all of her little boyfriends,” said Oliver Gawlik, a partner and founder of the farm.

Miriam is one of more than 100 animals who have been rescued from slaughter and now make their home at the farm sanctuary. Furry and feathered residents of the sanctuary include dogs, cats, cows, ducks, geese, goats and alpacas, Gawlik said.

All animals will live out the rest of their lives at the sanctuary, said Gawlik’s sanctuary partner and fellow sanctuary co-founder, Eryn Leavens.

Started in 2019, the sanctuary is now in its third year. It began in Oregon before moving to Waverly last year.

Miriam was one of the first animals to be rescued. She lived in the woods outside a farm that was abandoned and put up for sale. Gawlik and Leavens bought it, and rescued Miriam and the other animals living there.

They farmed the land and took care of the animals. Then they rescued more animals. People started donating to their cause. They finally decided to establish a non-profit animal sanctuary.

“It just grew” from a few animals to more than 100, Gawlik said.

In September 2021, the farm sanctuary moved across the country from Oregon to Waverly.

“We moved to Waverly to get away from the wildfires” that have devastated the West Coast in recent years, Gawlik said.

Three trailers filled with more than 100 animals, including Miriam, made the trek east, he said.

“We drove for three days straight,” he said.

They enjoy living in Waverly, running the farm, caring for the animals, and educating the public about the plight of animals such as Miriam and the benefits of a vegan diet, Leavens said.

“Our goal is to reach people to help them live more compassionate and cruelty-free lives,” she said.

Their message seems to be getting through, she said. Several people have switched to a vegan lifestyle after they learned about Miriam’s background.

Both founders take comfort in the happy endings they witness when animals find a forever home such as Tabitha and Titus: twin calves who recently celebrated their one-month birthday. They will be able to live the rest of their lives together.

“We have a lot of families here,” such as the twin calves, Leavens said. “I wish all animals could have that life.”

Hometown: Oliver is a native of Syracuse, while Eryn is originally from California.

How to help:  To donate, sponsor an animal, or volunteer, go to happycompromisefarm.org or find them on Instagram or Facebook.