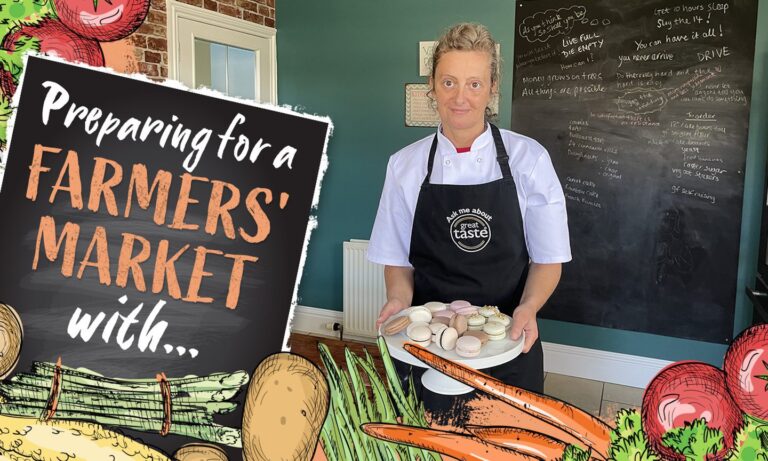 If you have or choose to cater to vegan and gluten-free diets, then you will understand the many struggles that come with ordering food.

Heather Morgan, from Fraserburgh, is among the community that knows all too well.

“I have left coffee shops before with nothing whilst everyone else gets something,” she says.

“If they have a choice, it’s usually either gluten-free or vegan, but rarely both.”

The mum-of-two had a mission – to produce bakes that are not only suitable for vegans and people with a gluten intolerance but tasted great, too.

This is when Veg Oot came into play.

As part of my Preparing for a Farmers’ Market with… series, I caught up with Heather to hear all about her background and just how important farmers’ markets are to her food business.

Heather said: “I started my business in July 2019 whilst working at my part-time job at an accounting firm in Fraserburgh – a job I had for 30 years (since leaving school).

But what spurred the talented baker and business owner to launch Veg Oot, exactly?

Heather was diagnosed with ME, otherwise known as chronic fatigue syndrome, more than two decades ago which came with many symptoms including painful arthritis and skin problems, to name a few.

She added: “After being on medication, which only caused stomach problems, I decided to consult a dietician privately, who had the answers and changed my life.

“After cutting out gluten, being borderline coeliac, and having a few other allergies, my symptoms improved over time, until the pain had almost gone completely.

“Then, once my husband and I watched the ‘What the Health’ Netflix documentary, we decided to go vegan overnight. Our two kids did the same.”

Heather and her family were vegan for around two years.

She said: “This got rid of all pain completely.

Farmers’ markets near me: Interactive map of events in Aberdeen and Aberdeenshire

“My husband, a creel fisherman, and nine-year-old son have introduced fish back into their diet, occasionally. And I might have fish very rarely, too.”

Heather has always loved cooking and baking in her spare time.

She admitted having “a slight obsession” with cooking programmes, including MasterChef.

After cutting out gluten and following a mainly vegan diet, she had to relearn all she knew about baking.

“This is when my passion for gluten-free baking began,” Heather said.

“But it was and still is not without its challenges.”

The baker operates Veg Oot from her home kitchen. However, hopes to convert the family garage into a bakery in the coming months.

Heather also makes macarons in a variety of flavours. Parma violet, chocolate orange, strawberry, pistachio and rose, coffee, and lemon curd are among them.

She uses many organic ingredients and no artificial colourings or additives where possible.

She spends 80 hours baking every week producing up to 480 bakes and taking 300 to 400 of these to markets, including Huntly, Bridge of Don, Inverurie and Ellon.

While the business owner struggles with guessing how much produce to make ahead of an event, she says the benefits of attending them outweigh the challenges.

“Farmers’ markets are great market research and allow you to and meeting customers,” Heather added.

“I love meeting people and getting their health stories, listening to their allergy problems, and giving them a choice. I know how they feel.

“Being gluten-free for over 20 years, it has taken a long time for things to change. I think it should be made law for every place to have a gluten-free, vegan option. We just want to feel normal.

“Being left out all the time does have one advantage – it gives you a very thick skin.”

People can also order from Veg Oot via the website.

For more on farmers’ markets…