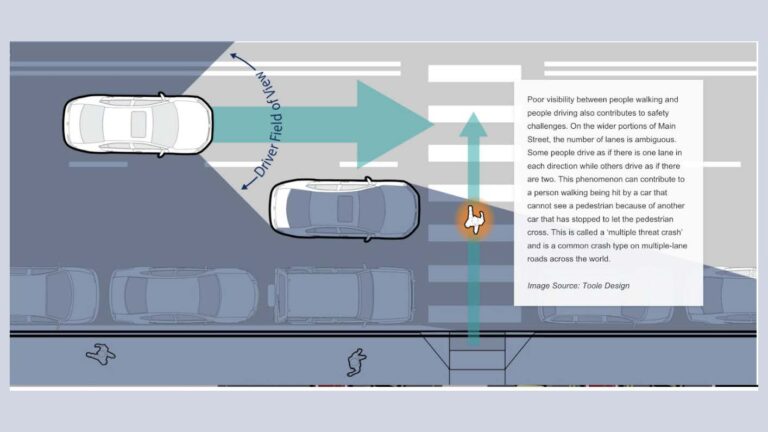 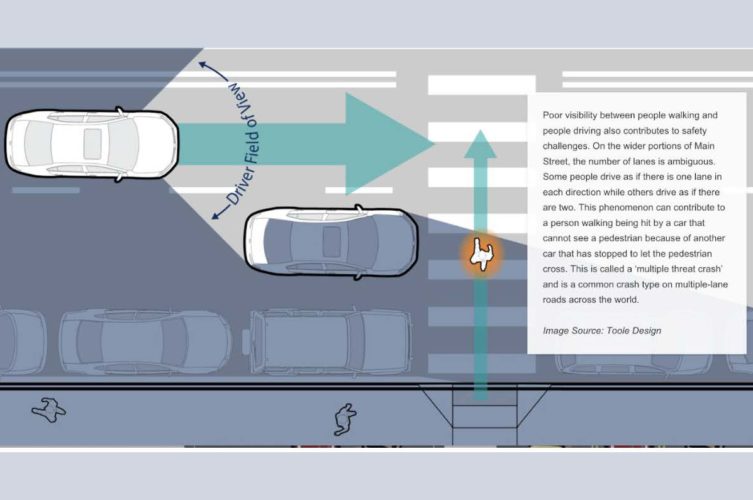 A slide from Selectman Leigh Davis’ presentation during the board’s special priority planning meeting on Wednesday, July 1. Davis tried to convince other board members to reopen a discussion on traffic calming measures.

Great Barrington — Despite multiple pleas by Selectboard member Leigh Davis, the board will not go back on its previous decision on traffic calming measures.

Davis gave a presentation to the board during its special priority planning meeting on Wednesday, July 19 to convince the board to reopen a discussion on previously approved measures.

Back on June 27, the board discussed and debated traffic calming measures after representatives from the New England-based consulting company BETA Group gave a presentation.

However, at the June 27 board meeting, Davis requested to reopen the discussion and to bring back representatives from the BETA Group to discuss the plans.

Select Board Chairman Stephen Bannon originally told Davis “there is no turning around” and that “we’re moving ahead with this.”

However, Bannon eventually relented to have the representatives come back at a future meeting.

At the July 19 meeting, Davis gave a presentation to the board on why she feels the discussions on the traffic calming measures should be reopened by the board.

In the first few pages of her presentation, Davis showed photographs of a pedestrian traffic accident on Main Street, which Bannon objected to.

“You told me what you were going to put up was just what the raised islands look like, not dramatic slides of one person getting hit,” Bannon told Davis. “That’s really not necessary.”

Davis agreed to Bannon’s request and she skipped over discussing the accident photographs that were in her presentation and moved forward.

As an example of a current traffic problem that may be solved by putting Main Street on a “traffic diet”, Davis said that “when we come from Stockbridge Road from the north into downtown, it’s one lane. When we get downtown into the core, where the most pedestrians are around Elm Street, then it fans out into two lanes. What’s happening is a lot of the crashes that are happening are a result of a blind spot that happens with the two lanes.”

Davis said that the “road diet” would create a “middle lane, which is a safe space.”

“The problem is that most of the accidents have been caused by a blind spot that’s caused by having two lanes traveling in the same direction,” Davis said. “When a car stops [on Main Street] to let a pedestrian cross, it masks another car in the other lane and the pedestrian’s view of it.”

Davis said that she met with engineers and an emergency responder when she developed her presentation, but she did not give the names of the people she met with.

“What [the emergency responder] said was that 90 percent of the accidents are caused by this two-lane configuration,” Davis said. “What I’m suggesting is that we go on a ‘road diet’ that narrows the configuration in town.”

The other members of the board were not receptive to Davis’ presentation and request to reopen the discussion on the traffic calming measures.

“I feel that the decisions that we previously made have created great improvement on pedestrian safety,” Selectman Eric Gabriel said. “I feel pretty good about the improvements that we approved.”

Chairman Bannon agreed with Gabriel and said “I think what we voted on will increase safety tremendously.”

“I thought the vote we took was clear,” Chairman Bannon said. “I think there’s a misconception not by you, Leigh, but other members who maybe didn’t see the meeting is that we’ve voted to do nothing. And that’s just not the case. And I’m not taking any public comment, because this is just about the board.”

Davis made a motion to reopen the discussion on traffic calming measures and to invite back members of the BETA Group for a meeting.

The motion was seconded by Selectman Garfield Reed for discussion.

“I personally want no more money spent than we need to [spend],” Reed said. “I’m concerned about the town spending more money than we have to if we have a model that works.”

“Garfield and I have been on the board for a little more than a year now, and this all came before us twice,” Selectman Gabriel said. “I think we’ve made some good decisions. I think we just need to move forward with the decisions that were made.”

The majority of the board voted against Davis’ motion, leaving Davis herself as the sole member to vote in favor.

See video of the Great Barrington Select Board Special Priority Planning Meeting from July 20 below.