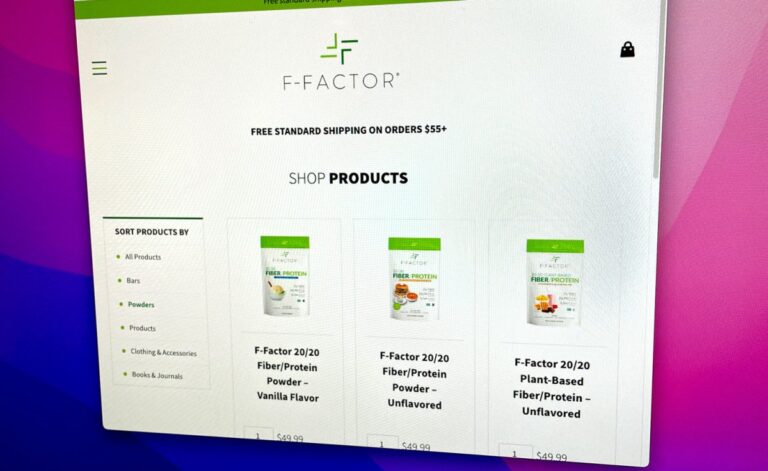 There’s a new podcast that I just started listening to that’s great so far. It’s called “Fed Up,” and it focuses on exposing the diet industry, which is one of my favorite areas of content. It specifically explores the “F-Factor diet,” its controversial creator Tanya Zuckerbrot, and the ongoing battle between Tanya and her devotees vs. those who have claimed that the diet made them seriously ill and those, like social media blogger Emily Gellis, who have tried to amplify those voices and warn the public. So far, they’ve released two free episodes and another few behind a paywall. The official website for the podcast describes it like this:

When Emily Gellis hears rumors of people suffering horrible side effects from a trendy diet she springs into action. Armed with over a hundred thousand Instagram followers, Emily launches a social media crusade to expose F-Factor and its founder, Tanya Zuckerbrot. It’s the start of a feud that will attract trolls, lawyers, and, eventually, national media all because of fiber. From Wondery, this is a story about wealth, wellness, and influence narrated by Casey Wilson.

What is the F-Factor diet? Well, the “F” stands for “FIBER”, and the diet focuses heavily on eating as much fiber as you possibly can.

F-Factor is a high-protein, high-fiber diet that is intended to be used as a weight-loss regimen. According to its website, “The F-Factor approach focuses on combining lean proteins with high-fiber carbohydrates, which are low in calories and keep you feeling full throughout the day.” Zuckerbrot, a registered dietician, claims that, while on the F-Factor diet, typical feelings of hunger and deprivation that are usually associated with weight loss are eliminated. That’s because, according to F-Factor, “the more fiber a food has, the more full you will feel after eating, leading you to consume less throughout the day. In addition, fiber has zero calories — so you get to fill up without filling out.”

This controversy over the diet first came to light in the spring and summer of 2020, and got a good deal of press at the time, with stories in the New York Times, the Daily Beast, and Refinery29.

The Daily Beast, for example, describes the beginnings of the controversy, when users began sharing their negative experiences with the diet with Gellis:

Starting last spring [2020], Gellis Lande says she began receiving hundreds of complaints about the F-Factor diet—and its line of bars and powders— allegedly causing health issues such as cramping, bloating, gas, and rashes, along with more serious allegations about people having to have part of their colon removed, and accusations that F-Factor led some who used the program to develop eating disorders.

Refinery29 explains that once Gellis began receiving these complaints, she felt she needed to warn others about the detrimental effects F-Factor was having:

According to the posts on Gellis’s Instagram, former F-Factor users say the alleged side effects of consuming the products include things like migraines, nausea, vomiting, urinary tract infections, rashes, painful bloating, and even heavy metal poisoning. Customers have been questioning whether or not F-Factor’s products contain high levels of lead, too.

Zuckerbrot has denied all of these accusations and is fighting back against what she has called “cyberbulling.”

Zuckerbrot, who was known as much for her nutrition counseling as she was for posting photos of her glamorous life on Instagram, pushed back hard, insisting that F-Factor’s products and diet are safe.

“Not one doctor of any ‘alleged victim’ ever contacted the company or spoke to the media elsewhere. These ‘victims’ never showed any proof that their symptoms were caused by F-Factor products,” a spokesperson for F-Factor told The Daily Beast.

Refinery29 has also presented Zuckerbrot’s objections to the accusations:

In a statement provided to Refinery29 on August 25, Zuckerbrot said: “We are proud of our company and of the hundreds of thousands of our customers and clients who have used the F-Factor diet and products safely for good health and nutritious diet. The F-Factor Diet book was first published over 14 years ago, and it has been endorsed by countless nutritionists and physicians. Out of 174,000 distinct orders in the last 2+ years, we have had only 50 health-related complaints, less than .03% of total orders, and we will always work with our customers to identify and resolve any issue they’re having to ensure they can use our product safely. We have facts and science to support our results.”

There are currently two lawsuits pending regarding this controversy, as twice now, Zuckerbrot has brought defamation charges against Gellis. Page Six explains:

In a new court filing, seen by Page Six, Zuckerbrot alleges: “Gellis’s social media misconduct has caused Zuckerbrot to suffer reputational damage and devastating emotional distress. Zuckerbrot fears for her safety and the safety of her family based on Gellis’s unhinged, malicious, and harassing Instagram posts.”

Zuckerbrot’s current lawsuit, filed in New York Supreme Court on March 3, also alleges that claims made by Gellis online — including that Zuckerbrot and her supporters were targeting her and her unborn baby daughter while she was heavily pregnant — are false.

In September 2021, Gellis said on Instagram that Zuckerbrot “is behind the hate accounts that bully me relentlessly.”

Zuckerbot asserts in her lawsuit that this statement was untrue, writing, “Gellis is accusing Zuckerbrot of paying people to go after Gellis, a criminal activity, thus it is a false and defamatory statement.”

I can’t wait to hear the rest of the podcast, and anxiously await the next episode. If you’re interested in learning more, too, check it out here.