He used to sell drugs in southern Dallas. Now he hooks community on his vegan food 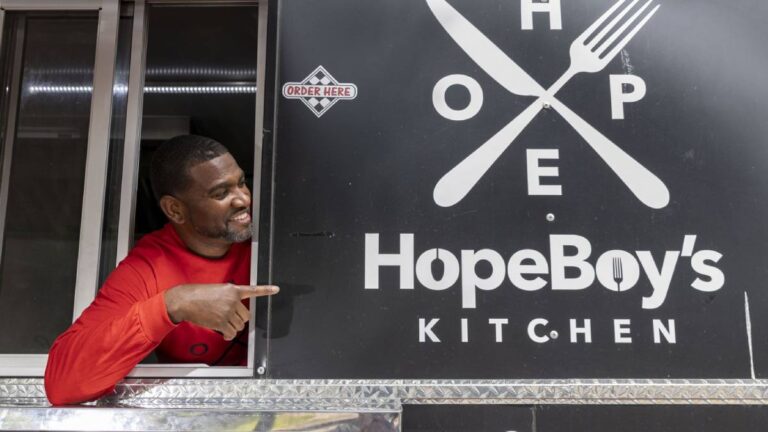 It all started with guacamole.

When Rico Alexander, founder of HopeBoy’s Kitchen, created his famous guacamole, his diet was mostly chicken, fish and vegetables. He was diagnosed with Type 2 diabetes and wanted to clean up his diet and reverse his high blood pressure and cholesterol.

“I didn’t eat any beef, any pork, very little bread and even dairy — I stopped eating dairy,” he said. “I said, ‘Man, I need a little something else’ so I started messing around with guacamole.”

The guacamole started off as something for friends and family, but eventually led to Alexander selling dozens of tubs and growing into a small business selling hot meals for his community.

HopeBoy’s Kitchen is a vegan food truck based in southern Dallas. Alexander founded it in May 2020 as a way to share his love for plant-based food in a community with few healthy options, lower life expectancy and plagued with health concerns.

Alexander called his best-selling guacamole “Crack Guac,” because it was addictive and he thought it was ironic.

A Pleasant Grove native, Alexander spent his teenage years dealing drugs in southern Dallas. In 1996, at age 20, he served four and a half years in prison. Though he now lives in Grand Prairie, he wants to come back and do good for the communities that he felt that he harmed.

“I chose to bring my food to the southern part of Dallas because this is where my heart is, where my passion lies, and where I’ve done a lot of dirt,” Alexander said. “I’m trying to correct some of the things that I feel like I’ve done to this community. I’ve damaged the community and now I feel like God is calling me to heal this community, and it’s through food.”

According to the 2019 Parkland Health Needs Assessment, southern Dallas has a high number of health issues including hypertension, diabetes and cancer. Alexander decided to take on a plant-based lifestyle in 2018 for his own health concerns.

“I’m trying to give people foods that they’re comfortable with — so tacos, right?” Alexander said. “Texas, especially the Dallas-Fort Worth area, we’re huge for tacos. Who’s not gonna like a good vegan taco?”

Alexander’s wife, Josi Alexander, is a proud proponent of his food truck and his vegan food, which she says she can’t tell is vegan. She said she always encouraged him to create this business, but Rico was convinced his food wasn’t good enough yet.

The two are foodies, always trying to find the best places to eat in the city. For Josi, the best is at home.

“For me, hands down, my husband has the best burger you’re probably gonna eat,” Josi said. “Best burger, best guacamole, best meatloaf — I mean, I could go on and on.”

The first location where Alexander shared his hot vegan meals was a Target parking lot in Oak Cliff. He was handing out pre-ordered meals there for 18 months, until he was kicked out because dozens of people began lining up for him.

While Alexander was incarcerated, his mother died at age 44 from cancer. Four years later, his dad died of a heart attack. Watching his own parents struggle and facing a Type 2 diabetes diagnosis, Alexander decided to try to change his diet. Eventually, he found that veganism was the best option for him.

Alexander’s mother loved to cook. He said she was phenomenal and wouldn’t go to any function without bringing something homemade. He said being in the kitchen makes him feel closer to her.

“I believe that she’s watching over me all the time,” Alexander said. “When I’m in the kitchen, I believe sometimes she telling me, ‘Hey, son, that’s enough seasoning right there.’”

Josi is proud of watching her husband inspire his community and those who have the same background.

“Everybody talks about the American dream and with my husband, I can see it,” she said. “He is a hope for those who want to get off the streets and grow.”

Now, HopeBoy’s Kitchen does occasional pop-ups and is at Tyler Station in Oak Cliff. Alexander hopes for the business to grow to eventually establish a brick-and-mortar location in the southern sector.