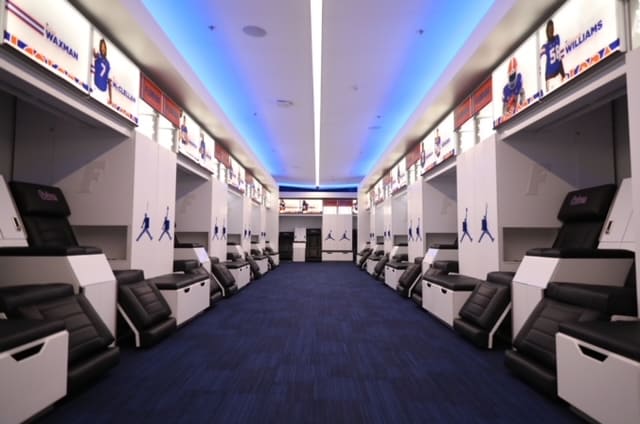 Sunday was a historic day for University of Florida’s athletic department. After years of hard work and planning, Florida’s 85-million-dollar Heavener football training center is officially open for day-to-day operation.

Billy Napier talked about the Heavner center during his Monday press conference.

“Yesterday was a big deal and a big step relative to University of Florida and Gator football,” Napier said. “Obviously, moving into the Heavener center is a big deal.”

The reactions were something to watch on Sunday as the players took to social media over the amenities inside the 142,000 square foot facility. The amenities include a barber shop, lounge area, resort-style pool, reclining lockers, sleep recovery room, basketball courts, a dining hall, and more.

Napier believes that the facility will create more efficiency within the organization as a whole.

“It’s going to help our organization from an efficiency standpoint, we’ve even seen that today,” Napier said. “The amount of time we are going to be able to save relative to transition between different meetings, different events with the team.”

“Time, number one to me is time,” Napier said. “The opposition has the same amount of time as you do, the overall efficiency, transition from the meeting room to walk through, I think the post practice transition to recovery, film review, you know immediately your back to work. We are talking, I think the difference is about 18 minutes difference, based on our research, in terms of location. 18 there and 18 back, so that’s 36 minutes a day that we’re losing. Now, we are right to it,” Napier said.

The facility includes some of the newest technology in the world.

“We’re talking about every bell and whistle,” Napier said. “I think there’s some huge advantages here relative to the technology that’s in the building from a teaching standpoint, from a physical development standpoint. The investment in nutrition for all sports.”

“These are all things that are going to contribute to the development of the player,” Napier said.

Senior safety Trey Dean claims Napier had a huge factor in the installment of this technology.

“There’s a lot of good technology around here, Coach Napier went and found it,” Dean said.

One amenity that Dean raved about was the sleep recovery room.

“That room is pretty cool, you can take a nap for like 20 minutes and feel like you slept for four hours,” Dean said.

That room is something the players will use frequently, especially during football season.

Another hot topic of Florida Gator football players is the simulation room. The room is outlined like a football field, and it projects the film or opposing team onto the field.

“You can walk into the room and simulate the game, that’s another plus on our opponent,” Dean said. “Because you know the more times you get game reps into your head it’s going to make the game easier.”

Dean was blown away by the new facility.

“It was really eye opening, breathtaking, state of the art, one of the premier facilities around the country,” Dean said.

Dean believes this facility will help them in more than just football.

“Just the stuff that Napier put inside the building. Just to help us become a better football player not only on the field but off the field as well, just really in life, and I think it’s going to show on Saturdays,” Dean said.

“Everything that he put in that facility is going to help us not only become a better player but a better man,” Dean said. “I know his whole staff is in there so we can find each and every office no matter who we need, any time of the day.”

Dean’s praise for coach Napier’s involvement in the facility is something that caught my eye.

“You know coach Napier really put a lot of time and thought into it,” Dean said. “If somebody gets an injury, we got the right tools and recovery to get us back on the field faster and stronger,”

Trent Whittemore is a player that’s been around since the starting conversations about this facility.

“We are just so thankful that we even have the opportunity to be in a facility like that and it was a dream come true for sure,” Whittemore said.

Whittemore says the players were very excited to move in.

“We have everything right there, it’s super convenient,” Whittemore said. “Very spacious, like I said, one of the nicest facilities in the country.”

“For me the best part is just having everything together,” Whittemore said. “We can walk right out into the indoor, or onto the practice field, or into the weightroom, I’d say that’s my favorite part of it.”

“It’s an efficiency thing, we are able to do so much in a shorter amount of time,” Whittemore said. “It also creates just a more relaxed day, especially in season. You’re running to class, or some days you don’t have class, you need to go lift, you need to stop by nutrition, all these sorts of things.”

The Heavener center should have a positive effect on recruiting as well.

‘I think it will mean a lot,’ Whittemore said. “A lot of other elite teams around the country have a facility that is very impressive, and we just joined or surpassed many of those, so it will have an effect for sure.”

Napier’s focus on player development and efficiency is something that we can’t look away from. Hearing Dean talk about Napier playing a big role in a lot of the technology that’s inside the facility was eye-opening.

Hearing Napier say that the team saves 36 minutes a day with the Heavener center shows his attention to detail.

I’m looking forward to touring the Heavener training center in the near future and providing you with more insight.