How Did It Go and What Happens Next?

The African continent has been dealt several blows over the last two years; the COVID-19 pandemic, conflict in certain regions, and the impacts of climate change have affected the continent’s development and progress towards achieving the UN Global Goals by 2030. It’s clear that decisions need to be made at the highest level with Africa’s best interests in mind so that she can be protected from threats to her development and her people.

The gathering and meeting of Africa’s leaders is a place where the continent’s needs should be at the top of the agenda, and her future prioritised. Thankfully, such a gathering occurred from July 14 -16, where the African Union’s (AU) leaders came together in Lusaka, Zambia for the 41st Ordinary Session of the Executive Council of the African Union (AU).

It was a convening of African state and economic leaders, giving space for them to examine how they have dealt with the continent’s issues thus far, and what more can be done with the financial resources the continent has, to put her needs first.

This is then followed by the Mid-Year Coordination Meeting, which took place on July 17, where heads of state had the opportunity to consider the current condition of the continent and set out definitive strategies towards bettering Africa overall.

The AU’s theme for 2022 is “Strengthening Resilience in Nutrition and Food Security on the African Continent”, and so it was no surprise that this remained the theme for the convening of the AU’s leaders.

The timing for these meetings was just right, coming just off the back of the release of the 2022 State of Food Insecurity and Nutrition in the Word (SOFI) report, that showed how the persistence and burden of food insecurity and malnutrition continues to plague African countries, with 1 in 5 Africans facing hunger.

What Took Place in Zambia and What Role Did Global Citizen Play?

Thanks to an invitation from Zambia’s Foreign Affairs Minister, Stanley Kakubo, Global Citizen was present in the country for the duration of the meetings; our team was joined by Sabrina Dhowre Elba, International Fund for Agricultural Development (IFAD) UN goodwill ambassador, and co-chair of Global Citizen’s Europe Board.

Our team’s mission ran strong alongside the AU’s theme for the year, as Global Citizen sought to bring awareness to the growing food security crisis, and to help hold Africa’s leaders accountable to the prior commitments they’ve made to prioritise strengthening the continent’s food systems.

With the actions taken by Global Citizens forming a strong basis for the platforms on which we delivered our message, the team drove home the message for Africa’s leaders to focus on dietary diversity, supporting smallholder farmers, and pledging stronger financial and policy commitments to food security.

Global Citizen’s Global Policy Lead for Food Security, Agriculture & Nutrition, Mwandwe Chileshe, broke down the issues that Africa’s leaders needed to prioritise when she spoke on the current state of food security in Africa on Zambia’s The Update.

“We’ve heard a lot of conversations from governments and businesses, all of them saying, ‘oh this is an important topic’ — but there hasn’t been matching resources actually put up to tackle the problem,”  Chileshe said.

“The biggest challenge is, even though we have a lot of goodwill, there’s still a lack of resources to be able to meet the crisis that is before us,” she added.

Chief Policy, Impact and Government Affairs Officer for Glolbal Citizen, Michael Sheldrick also spoke the state of food security, and highlighted that the resources that world leaders have committed to are not enough thus far. Speaking to HotFM Red Hot Breakfast show, Sheldrick said: “What is a tragedy is a G7 recently — you’ve got the world’s wealthiest economies, they account for over 42% of the world’s GDP — and yet they announced $4.5 billion to help address this crisis to the World Food Programme.”

“It’s great,” he continued, “but that is almost $20 bilion short of what the World food Programme actually needs to respond to this crisis. We’re not seeing anywhere near the resources [needed] on a global level to be able to respond. We’re seeing a lot more go into military, to arms, but not much going into food.”

In her interview, Chileshe also highlighted existing commitments that needed to be fulfilled by the leaders, in order to balance out the needs of the continent. Such commitments were made through the Malabo Declaration on African Agriculture, and aimed to end hunger, triple intra-African trade in agricultural goods and services, enhance resilience of livelihoods and production systems, and ensure that agriculture contributes significantly to alleviating poverty.

Alongside calling for Africa’s leaders to take action — a call strengthened by the voices of Global Citizens who took action with us in the run up to the AU meetings — Global Citizen and Sabrina Dhowre Elba had opportunities to engage with local communities, policy-makers, and smallholder farmers in a continuation of the mission.

The week began with a meeting with local activists, artists, and influencers, where we spoke with them about some of the biggest challenges facing youth in Zambia, and considered creative ways to turn solutions into action.

Meeting with the President and First Lady of Zambia 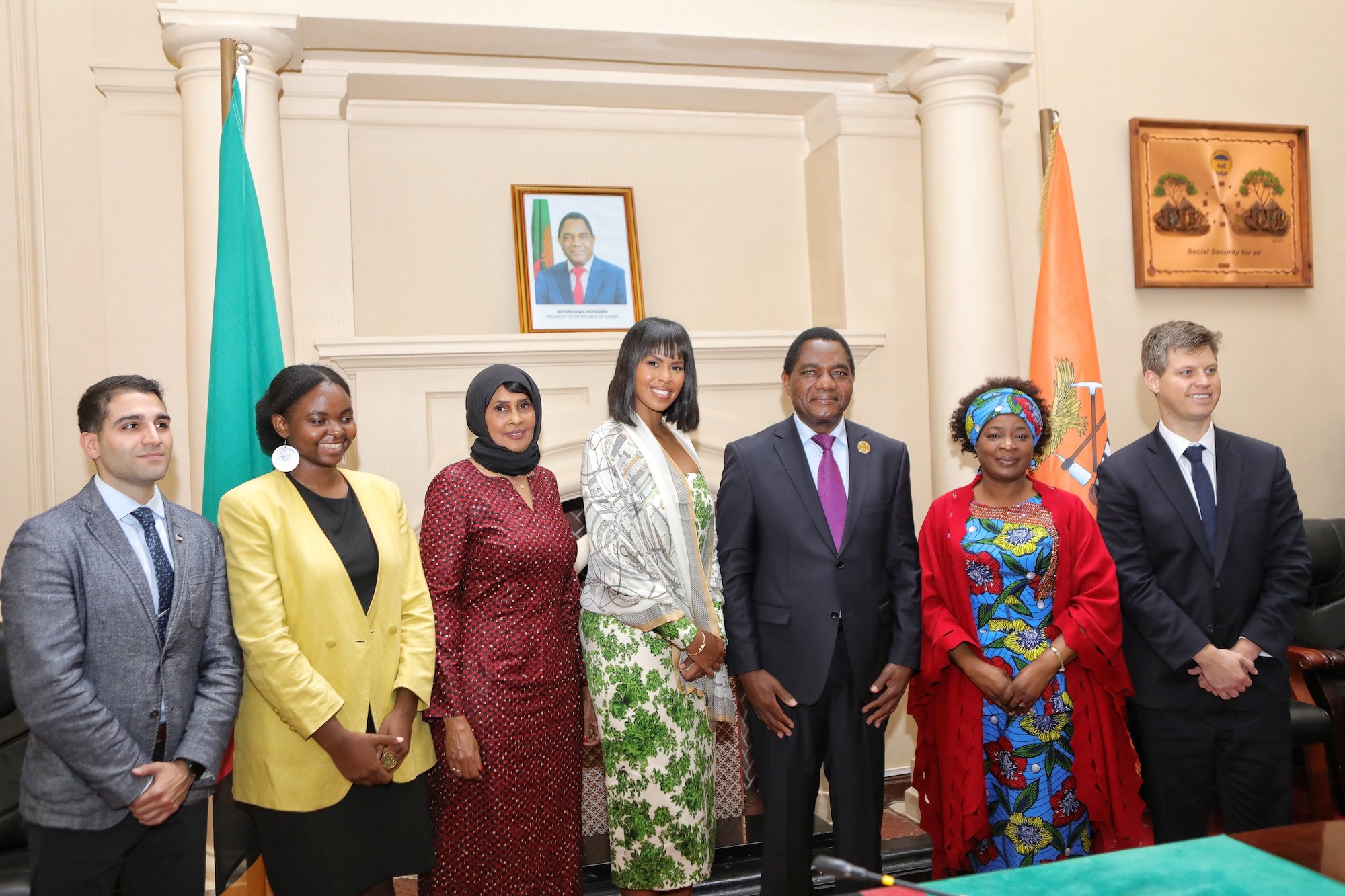 In the middle of the week our team also had the chance to speak to Zambia’s President and First Lady, Hakainde and Mutinta Hichilema; where the president reflected on his own experiences living in a rural area, as well as the times he had worked closely on IFAD projects. You can read more from President Hichilema, in this opinion article co-written for Global Citizen by Hichilema and Barbados’ Prime Minister Mia Mottley.

The consensus of this meeting was that shared partnerships towards the end goal of defeating hunger on the continent are necessary now more than ever. Elba assured the office of the First Lady of her commitment in working together to ensure greater investment in rural communities, agriculture, and improving the lives of women and girls. Elba noted that ending hunger requires political will.

The Experiences of Smallholder Farmers 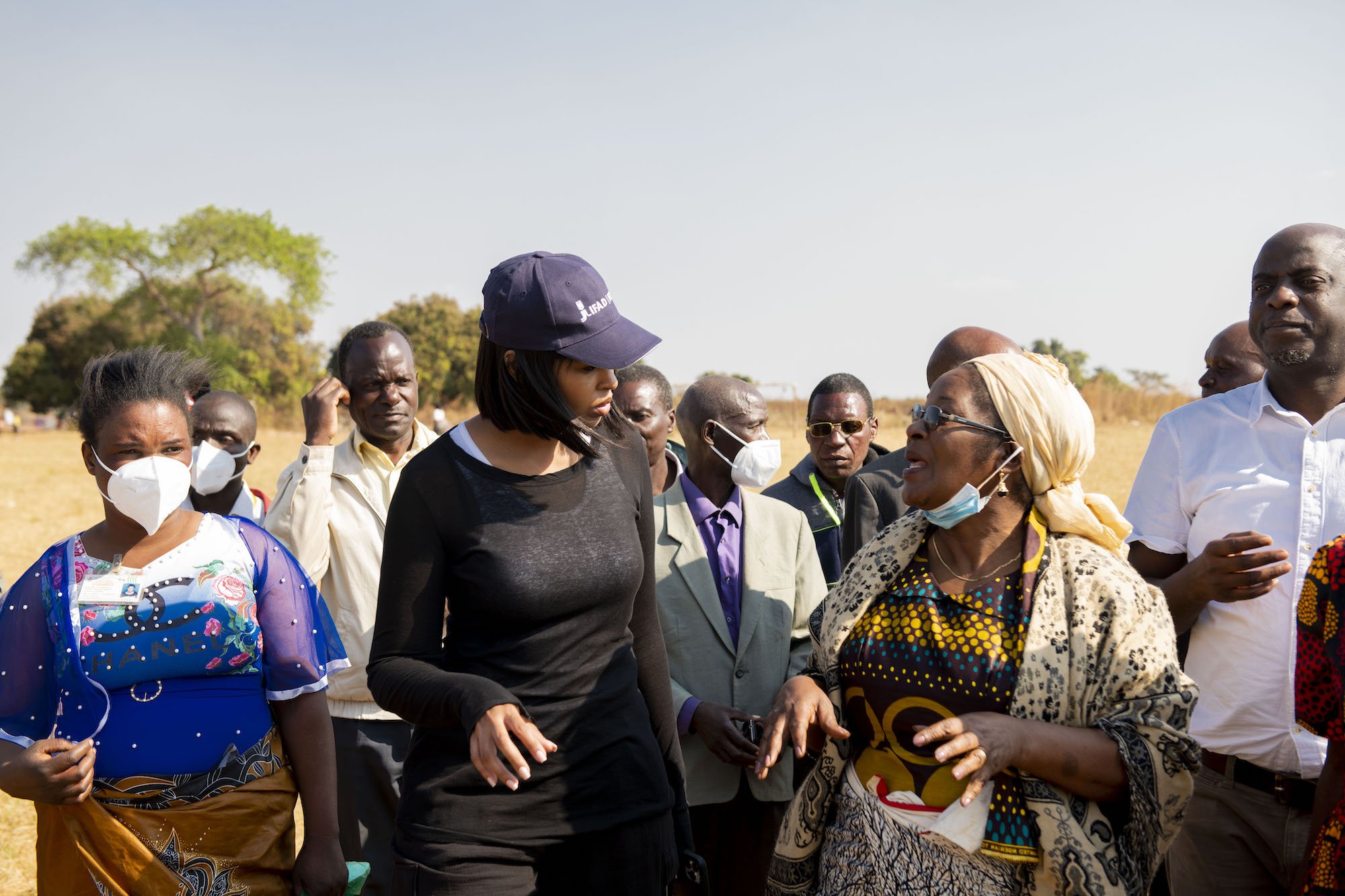 Over the course of the weekend of the meetings, Elba, the technical team of the Zambian First Lady, and the Global Citizen team, visited communities in Keembe, Chibombo District, and Kato village in Kapiri Mposhi.

The team met with small scale farmers who received support from the Rural Poor Stimulus Facility (RPSF) of IFAD. In 2020, Global Citizen had joined Sabrina and Idris Elba in calling on governments to boost support for farmers through the RPSF, which was designed to assist those struggling through the COVID-19 pandemic. Governments like Canada heard the call from Global Citizens and stepped up to pledge new funding.

For this year’s visit, the team collected impactful success stories and were shown the diverse nutritious food the farmers were able to produce and bring to market as a result of the program.

The team also visited the start of a “smart village” in Kapiri Mposhi alongside Minister Kakubo — a model on how communities can adapt to climate change, provide food security, and foster economic growth.

The visits culminated in a civil society event which recognised the AU meetings as a useful opportunity for Zambia to inspire other African leaders to raise the profile of food and nutrition security on their national development agenda. The event featured panels that hosted speakers including Chief Executive Officer and Founder of Zambia’s Java Foods, a member of the SUN lead group Monica Musonda, and Maxwell Mumba an incredible youth advocate who is a youth leader for nutrition on the topic of scaling up the nutrition movement among others. 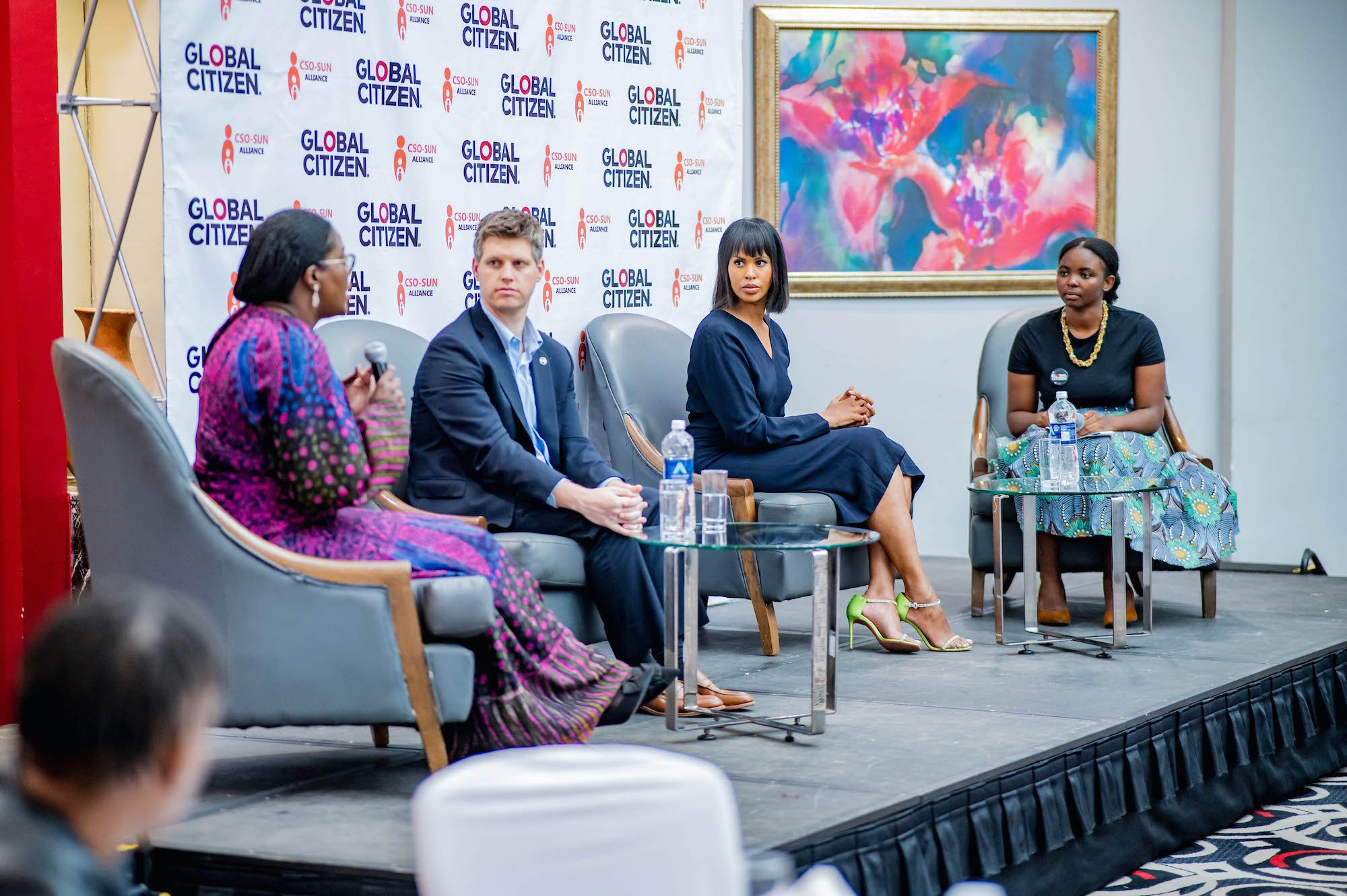 The Mid-Year Coordinating Meetings: What Was Discussed?

As predicted, this topic was at the top of the agenda, and leaders took to making announcements about their plans to tackle the issue.

President Hichilema opened the meetings saying: “To guard against the growing global problem of food insecurity, which is being compounded by rising costs of food, energy, and agricultural inputs, we need to raise the levels of productivity in agriculture, emphasise value addition through Agro-processing, accelerate research in agriculture, emphasise and increase support to rural farmers whose livelihoods mainly depend on agriculture.”

Following food systems, health systems also led the agenda, with leaders pledging to establish and strengthen existing Public Health Emergency Operation Centers (PHEOCs) in 90% of AU member states by 2026 as a way to prepare, detect, prevent, and control disease outbreaks in a timely and coordinated manner.

Former Prime Minister of Chad and Chairperson of the AU Commission, Moussa Faki Mahamat aptly noted that the meetings were preceded and defined by a multitude of unprecedented crises, highlighting why regional integration is essential.

Macky Sall, Chairman-in-Office of the African Union and the President of Senegal, announced to the media that the leaders had agreed to actualise the implementation of the African Continental Free Trade Area (AfCFTA) to promote trade and enhance integration.

However President Sall noted with concern that the partial reallocation of SDRs and the Debt Suspension Initiative in support of Africa’s resilience and economic recovery has had no significant progress yet.

What Needs to Happen Now?

The African continent and the rest of the world are still way off from being able to ensure an adequate amount of resources are available to strengthen community food systems and to avoid a wide-scale famine.

Action needs to be taken urgently to boost resources to organisations like IFAD in order for us to meet Africa’s hunger and food security needs, that have been exacerbated over the last couple of years due to global challenges.

In the short-term, this means supporting small-scale farmers suffering from the pressures of the climate crisis and the impact of the war in Ukraine, and ensuring they can access fertilisers, seeds, energy, and technology so that they can continue to produce food and ensure future harvests.

For the medium- to longer-term, we need a massive financial boost towards rural development and agriculture in low- and middle-income countries. The goal is to strengthen small-scale farmers’ resilience to shocks including climate change, value chain breakdowns, and price increases. These investments will help countries minimise their reliance on food imports and increase their independence by allowing them to produce their own food.

You can continue to join us in moving towards ending food insecurity and alleviating hunger by  taking action to help end extreme poverty for everyone, everywhere, by downloading the Global Citizen app or signing up to become a Global Citizen on our website.