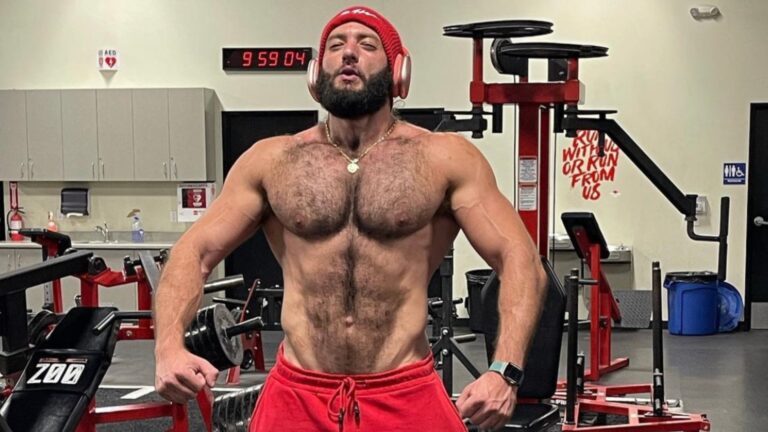 Ever since I was a child, I have had complications with my digestive health, one of which being chronic constipation. This continued throughout my adulthood and would regularly affect my mood and cause a feeling of heaviness in my stomach. During my early twenties, I also had several surgeries related to fissures.

In 2018, things began to change. I was working twelve-hour days in the car business, in that same year, I turned vegan in an attempt to heal my gut, and a year later, in October 2019, I quit my job so I could focus on my fitness.

I’ve always been into fitness and wanted to make that my priority—my goal while growing up was to be a bodybuilder, but it wasn’t successful due to my gut health and several other injuries that I’d obtained.

Turning vegan made me feel worse—my joints and my gut were also inflamed. So, in 2020, I visited a doctor to do some X-rays and after further assessment, he advised me to look into a carnivore diet in an attempt to heal my gut and reduce inflammation.

That evening, I sat by my computer and did extensive research, as I’d never heard of a strict carnivore diet before. Shockingly, I found a large community of doctors that recommended this specific diet, which is restrictive and only includes meat, fish, and other animal foods like eggs and certain dairy products.

I realized that some of the research I had read suggesting that carnivore diets are harmful to the human body was strictly anecdotal, but I took it as the truth at the time. The reality is that each human body is different and unique.

After reading further studies regarding the carnivore diet, I found a theory that suggests that cooking meat causes it to lose a lot of fat and water-soluble vitamins, as well as making it more difficult to digest. These studies suggested that the less cooked the meat is, the more vitamins and minerals we gain from it! I was also advised to eat “nose-to-tail” by some professionals online, which includes eating an animal’s brains, eyes, liver, heart, and testicles among other organs. It is suggested that organs contain all the nutrients we need to thrive—vitamin C, Choline, DHA, and cholesterol are contained in the animal brain alone!

After days of research, I switched to a carnivore diet and began eating raw cow, lamb, and sheep, as well as their organs, and with time, I increased my raw meat consumption. Almost immediately, I began to feel better—my chronic constipation had suddenly stopped and I felt lighter. I continued this diet and began to notice that my mood had also improved, as I was mentally sharper. For the first time, I was able to focus on my fitness career successfully, without experiencing any inflammation.

My fitness goal is to weigh roughly 250 lbs lean, which is why I eat almost 5,000 calories worth of food a day. Naturally, I’m not the type of person who likes to eat—while some people may crave food, I eat only for survival, not enjoyment, which makes it easier for me to meet my daily goal.

When I wake up, I have a few cups of raw milk in the morning with ground beef, along with a protein shake. I then eat organs for lunch, including frozen animal brains, along with ground beef, and repeat the same routine in the evening. Although I used to eat kidneys, I now eat brains as I enjoy the taste and prefer the vitamins that come with eating this organ.

There were no side effects to this diet—I did not need to walk my body through it. Almost instantly, I adapted, and two years later, it’s still serving me well.

In February, 2022, I started creating videos on TikTok to raise awareness of my carnivore lifestyle and the surprising benefits. At the time, I was recording a video of myself eating raw steak at my friend’s gym. While recording, he asked me if he could have a piece, and tasted it live on TikTok. After this video went viral, I continued to post consistently and made almost 200,000 followers, with my videos receiving a million views per post.

However, some people felt that my videos were too controversial and offensive. I’d go live on TikTok, eating raw meat and brains while having conversations with people who were interested in this diet. But my TikTok live videos were constantly being reported.

Though some people would call me “Wolverine” and “Chad,” which refers to the simulation of what a perfect male would look like, others called me an attention seeker, while insisting that I was grounded in toxic masculinity. I believe that I have the right to freely share my diet choices, along with the impact that eating raw meat has had on my body.

The good thing about this controversy is that it allowed me to reach more people. I’m now an online coach, booking in clients who are concerned with their gut and want to body build like myself. In 2023, I plan to compete in a bodybuilding competition while continuing to reach more clients.

Eating raw brains and following a strict, carnivore diet has changed my life for the better.

Weam Brieche is a fitness coach and bodybuilder. He aims to raise awareness of the benefits of an all carnivore diet.

All views expressed in this article are the author’s own.

As told to Carine Harb.