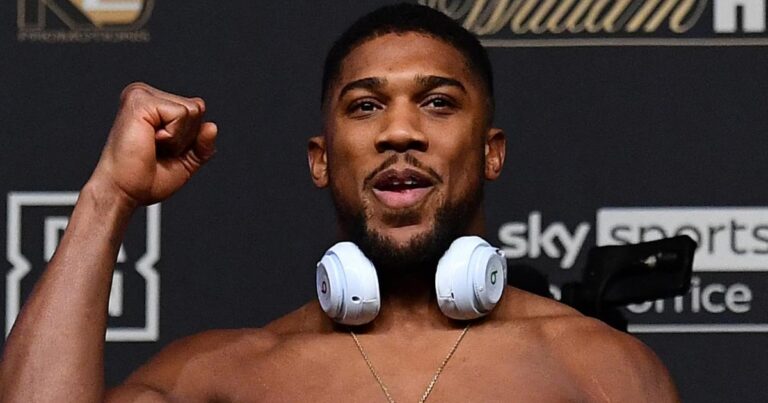 It’s a perennial question for mere mortals looking at Anthony Joshua’s physique: what does the boxing superstar do to look as ripped as he does while weighing more than 17 stone?

British boxing rival Tyson Fury has jibed that Joshua is a mere bodybuilder, which is a comically unfair assessment of an athlete whose spectacular frame matches his title-winning career among the very elite in the ring.

When he attempts to regain the belts he lost to Oleksandr Usyk in September 2021, Joshua will be hoping an on-point nutrition plan will help him produce the knockout many believe he will need to beat the supremely skilful Ukrainian.

What does the fighter known as ‘AJ’ eat? How many calories does he wolf down a day? Is he a vegan? Digest the answers here.

It’s not known fully if Joshua is vegan but he has talked in the past about how he chooses to have “vegan lunches” in the build-up to a fight.

Joshua’s nutritionist, Mark Ellison, had a surprise when he was filmed giving his client lunch choices during the training camp for his win over Joseph Parker.

The expert, who also works with Premier League giants Manchester United and the Olympic Team GB, approved and said he would “have to see if I can come up with some ideas for vegan lunches.”

It seems unlikely that Joshua has entirely followed in the plant-based footsteps of one of his former potential opponents, David Haye, who maintained a massive, lean physique while competing at the top of the heavyweight division.

He does, however, appear to eat less meat than might once have been expected of some of the largest sportspeople in the world, with the options Ellison gave him indicative of parts of his diet that are kept to the second half of his day.

In the early part of his day, Joshua has said that he eats eggs, porridge, yoghurts and fruits. “Then we go on to jacket potatoes, tuna, mayo, beetroot with a handful of veg,” he has previously said.

“In the evening, I’ll take some chicken, rice with mashed potato with a lot of veg as well. I make sure I’ve got a lot of water and in between sessions I’ll have my protein shakes.”

When he spoke to Boxing News before Joshua’s epic win over Wladimir Klitschko at Wembley Stadium in 2017, Ellison also said that the Londoner eats “huge amounts” of wholemeal pasta as part of his lunch, with a later afternoon snack including a round of wholemeal sandwiches and energy gels.

Fillet steak and lamb with sweet potatoes were also part of his menu for dinner, and there can be room for treats.

Ellison said he would add a little meringue to Joshua’s yoghurt to include some sweetness while the fighter was burning through calories during camps, or give him apple crumble or apple pie with custard occasionally.

“There are no cheat days, champ – we don’t cheat, we stay focused,” Joshua told a fan who asked him whether he strays from his rigorous diet. “But if I do have a cheat day, I like brownies with some ice cream, maybe.”

Joshua has Nigerian heritage and eats dishes traditional of the country including root vegetable yam, food staple eba and seed egusi, according to Oak TV (via Men’s Health).

How many calories does Anthony Joshua consume daily?

The knockout artist’s daily calorie intake seems as demanding as his training. Ellison said Joshua eats between 4,000 and 5,000 calories a day at the height of fight training – around twice as much as the recommended average amount for a man.

“The food shopping costs a bloody fortune,” said Ellison, calling Joshua a “huge man” and explaining that he uses liquids such as shakes to ease the “challenge” of consuming so much.

“We use a fantastic butcher – all locally-sourced meat. I empty my wallet there on a Monday morning. We’ve met a great local greengrocer who helps us out – I’m knocking on the door at 7am on a Monday to fill the boot of the car with vegetables and grains,” he added.

Ellison praised Joshua’s attitude. “Anthony is easy to look after as he’s not fussy,” he said. “He’s like, ‘give me anything – I’ll eat it.'”