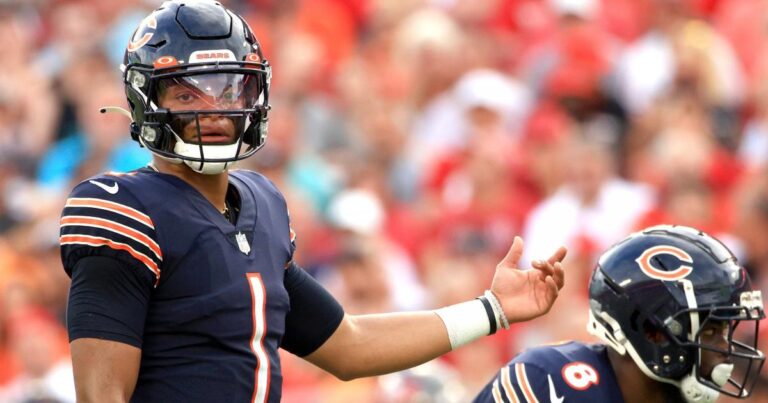 Justin Fields has had an uphill journey in trying to achieve NFL success. Much of that is due to him not having much help since being drafted 11th overall by the Bears in 2021, and his new coach not utilizing Fields’ athletic gifts to give him the best chance to succeed.

Nonetheless, Fields has taken steps to make it to the top. Most notably, the Ohio State alum has spurned meat for tofu and dairy milk for soy milk. Fields has been a vegan since 2020. He decided to take the plunge after participating in a 28-day plant-based detox with his family while in COVID quarantine.

Fields is hardly the first athlete to trade burgers for black bean alternatives. From the soccer world (USWNT star Alex Morgan) to the tennis court (23-time major champion Venus Williams) and elsewhere, athletes have gone vegan over the years to get an extra edge.

“I think the biggest change for me is just how much lighter and faster I feel all around,” Fields said, according to Business Insider. “This change was very drastic for me after I did the challenge I did with my family and was ultimately the reason I chose to continue a plant-based diet.”

What does Justin Fields eat as a vegan?

Swapping meat for meatless options may seem a daunting task, but according to Fields, it hasn’t been too much of a problem. In fact, he has a fair share of vegan favorites.

“Plant-based burgers are the most common for me at different restaurants,” Fields told Business Insider in 2021. “Every now and then, I’ll have some falafel or vegan chicken nuggets.”

Fields told Business Insider that his teammates are committed to Fields’ dietary choices, even embracing some of the protein shakes he makes in conjunction with brand sponsor OWYN.

Fields still has a way to go before establishing himself as the long-term solution to the Bears’ quarterback problem, but he is trying to go the extra mile with his dietary restrictions.

“I really don’t feel like I am missing out at all,” he said.

Athletes who have gone vegan

As mentioned, many athletes have let go of their meat-eating desires. Here are a few:

As one of the best Formula 1 drivers in the world, Hamilton has a massive voice. That lends him to speak out against perceived injustices. Hamilton has been especially vocal against the treatment animals receive while in captivity.

For Hamilton, it was an easy choice to give up meat given the environmental effects that animals like cows can have on the production of carbon-emitting gases such as methane.

Morgan is one of the greatest soccer players in United States history. She credits her vegan diet with helping her to maintain her performance on the field while also motivating her to speak against animal cruelty off it.

Williams is one of the greatest tennis players ever, but she credits her change to a plant-based diet with helping her to play at the highest level even after turning 40.

“I was diagnosed with an autoimmune disease, and I wanted to maintain my performance on the court,” Williams said, per Insider. “Once I started, I fell in love with the concept of fueling your body in the best way possible [through raw, vegan food].

“Not only does it help me on the court, but I feel like I’m doing the right thing for me.”

The former UFC fighter says not eating meat makes him feel smarter inside and outside the Octagon.

“I think you’re a smarter and more intelligent fighter [when you go vegan]. Me and my brother (Nick Diaz) are at the top of the game and have been for a long time. We’re obviously doing something right. Besides knowing how to kick somebody in the head, you should know how to feel good tomorrow,” Diaz told Men’s Journal, per Insider.

Kaepernick has also opted for a vegan diet, although there’s still no clarity on why he made the decision.