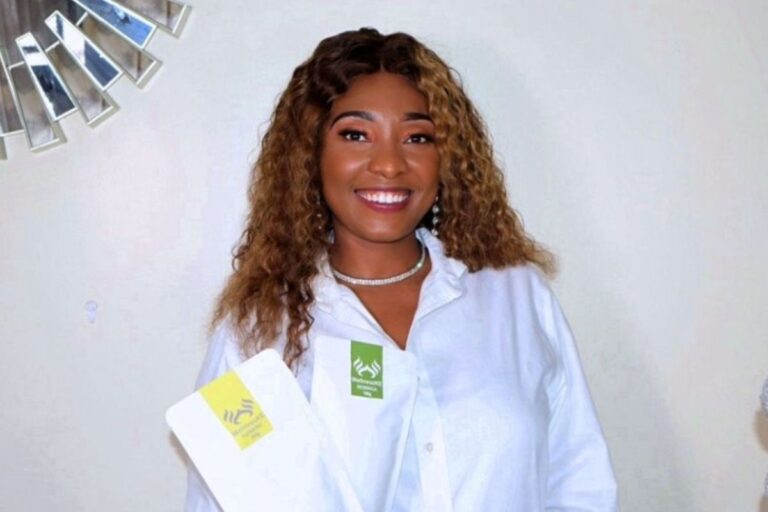 Lying on the hospital bed surrounded by family members and medics, Fatma Mohammed, 36, was trying to recall what had happened to her and how she had ended up there – and most importantly, what had triggered the sudden turn in her once-vibrant health.

This was not the first time she had suffered from a sudden dizzy spell and lost consciousness. The difference was that this was the first in a public space and very traumatising.

She wanted answers.  Though doctors had previously diagnosed her with uterine fibroids, they had to address the symptoms that now threatened to scamper the dreams and career of the journalist who had a live TV show – Pambazuka National Lottery – on Kenyan station, NTV.

The last thing Mohammed remembered was getting out of a lift.

“On that Wednesday, August 23, 2017, my French classes ended at 4pm and I quickly picked my notebook and pen and dashed out to the salon for make-up before my show, which was due in two hours,” she says in interview.

“As I stepped out of the building, I felt dizzy but I ignored it telling myself it was because I had been sitting indoors for a long time. To keep off the direct sunlight, I walked to my usual salon.”

At the salon, the beautician noticed that something was amiss. “You look sick,” she told Mohammed. “‘I feel slightly unwell, but I will be fine,” I told her as I tried to steel myself,” the TV personality explains.

With barely 30 minutes to get to the studio, she settled the bill and dashed to the lift. As she stepped out on the ground floor, she blacked out.

She was taken to Aga Khan University Hospital. Mohammed had been battling with systic fibrosis for 15 years. She had first been diagnosed with the condition when she was 21. Doctors recommended surgery, but she was hesitant because she was unsure about what it meant for her as a young woman.

“I would pass out a lot – but in the house. This time it happened outdoors. It was a sign that the condition was getting worse,” she says.

She suspended her French classes to allow herself more rest but continued with other work.

“I continued doing my live TV shows, but it would take a lot of rest before the show and during rehearsals,” Mohammed adds.

She was also dealing with anxiety, trauma and anger. “I kept cursing that little lump in my tummy. What worried me most was that it became a condition that would put my career on the line,” she says.

“I was getting worse, and the numerous visits to doctors were not helping, sadly. I was angry at the doctors, myself and the world. If I go to the doctors to get help, I should get it or at least understand what is going on in my body.

Also, if they had advised me about estrogen and its side effects, I would know that thrombosis was a possibility. I did not have any of this information. Not even once was estrogen mentioned. Not once in all those years, yet it is the culprit,” she adds.

Aside from fainting, she was also experiencing very long, heavy and painful periods. The other condition was severe premenstrual syndrome, which included mood swings so severe that she needed psychological support.

“My biggest support system became my mother because she is a psychologist and had to handle me as a patient as well. While most women do not get this much support, the condition is worse, and requires a professional for proper managemnt,” she shared.

Worries about never being able to have a child aggravated the situation.  At the same time, she dreaded the hysterectomy doctors were recommending. She believed that somewhere out there must be people like her who had conquered what she now knew as uterine fibroids (UFs), non-cancerous growths in a reproductive-aged women’s uterus.

The charges for the surgeries are not affordable for many women. Though its cause has not been well understood, there are a number of predisposing factors for fibroids, such as family history, obesity and early onset of puberty. The condition affects an estimated 170 million women globally. Most of those who suffer from fibroids are below 50.

Dr Agnes Gachoki, a gynaecologist, insists that as much as some women have opted to resort to herbs and other remedies, the only real solution is removal through a surgical procedure.

“The reason why only surgery works is that fibroids are estrogen-dependent growth and you cannot really remove this hormone from the body.

I have seen many patients run away from surgery, but this poses a threat to their lives because when this growth turns into cancer, it can kill you. They hold hope that it will go away but fibroids do not just go away,” she says.

Experts say most prevalent age of women who suffer severe fibroids includes women between the ages of 40 and 50 as they are no longer at their childbearing peak. Women aged between 20 and 30 are less likely to have fibroids. “Early symptoms for fibroids include painful menses, swelling in the lower abdomen, which sometimes appears like a potbelly or pregnancy.

While the only option is surgery, there are drugs that are sometimes given to victims who are bleeding to help with the management. The medicine shrinks the fibroid so the bleeding is also less during surgery,” shared Dr Gachoki.

In her search for answers, Mohammed started an online “sisterhood” platform, to connect and speak with others suffering from the same condition and symptoms.

What started out as an informal conversation has now morphed into a full-fledged entity – Wellness KE – for creating awareness of uterine fibroid and menstrual-related illnesses.

In addition to discussions on the conditions, the platform also explores a variety of natural solutions.

Through the platform, Mohammed has discovered just how many women have been battling fibroids without any support. Florence Kakai, a 30-year-old receptionist, is one user. Scheduled for surgery, she shared that turning to herbs and natural foods had provided relief from the heavy bleeding.

“I found out I had fibroids in 2019. I had been receiving very heavy periods. I got pregnant though, the same year, and gave birth in 2020, after which I got on Nano family planning.

A few months later, I started feeling pain in my lower abdomen. I knew it might be the fibroids so I went in for an ultrasound. It was positive and at 9 cm. It was very hard for me to accept, so I took a break and just stayed like that,” she shared on the public group.

While waiting for her surgery, Kakai resorted to natural foods and herbs to shrink the fibroids, which had doubled in both size and pain.

“I started by cutting out red meat which was my favourite food, started eating more vegetables, cereals and salads, and became friends with avocados. My periods went back to normal in a few months. I started getting the normal four days.

In March 2022, I went in for another ultrasound and the fibroid had gone back to its previous size, 9cm. so my doctor has advised us to wait and observe what will happen while I continue with the diet,” she explained.

Other journalists have joined the battle, too. Natalie Githinji, 24, has been using her journalism experience to encourage others battling the condition.

TV and radio personality Njambi Koikai, 36, has endured the condition for 18 years. Her condition was so acute that at one time, she even suffered a lung collapse and had to seek urgent surgery in the US.

FDA figures show that in some geographies, up to 80 percent of women suffer uterine fibroids by the time they reach age 50.  In fact, the reported incidence of fibroids in most studies is likely underestimated because they include only symptomatic women with clinical diagnoses confirmed ultrasonographically. That rules out tens, if not hundreds of millions of women in areas that lack these specialised facilities.

The founder of Wellness KE says educating more women on hormonal health will go a long way to finding solutions to this illness. In the meantime, it offers some relief. Like green tea, which is essential for hormonal balance, turmeric tea which beats inflammation and helps with menstrual and fertility issues, seed cycling to help boost fertility and balance hormones and wellness packages both fitness and nutrition plans to help women maintain a healthy lifestyle from the comfort of their homes. “It does not take much for women to understand the effects of progesterone on their reproductive health,” Mohammed said.