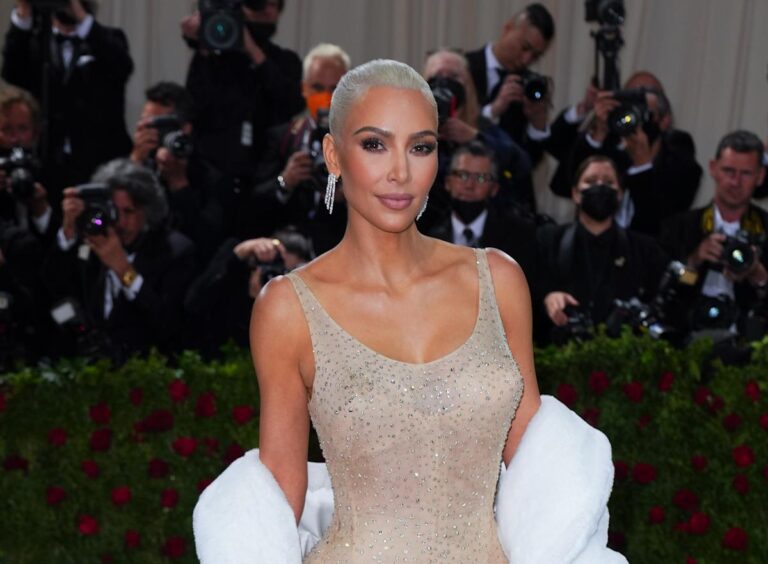 This article is for informational purposes only and is not a substitute for professional medical advice, diagnosis or treatment. Contact a qualified medical professional before engaging in any physical activity, or making any changes to your diet, medication or lifestyle.

Kim Kardashian says a change in her diet caused her to get psoriatic arthritis, but a Canadian doctor says that link is hard to prove — and there may be more at play.

Back in May, the 41-year-old reality TV star revealed she lost 16 lbs (7 kg) in three weeks before the 2022 Met Gala. She took on the intense diet so she could fit into an iconic vintage, sequin-encrusted gown worn by Marilyn Monroe in 1962.

Since then, Kardashian has received a lot of criticism — from other celebrities, influencers and body-positive activists, among others — for her crash diet. However, the Skims founder says it wasn’t done in an unhealthy way, and she did it with the help of a nutritionist and trainer.

In an interview with Allure, Kardashian reveals more about the effects of that diet, saying it caused her to get psoriatic arthritis.

Kardashian regularly eats plant-based meals, but during her diet she switched to eating real meat.

“Psoriasis broke out over my body and I got psoriatic arthritis so I couldn’t really move by hands,” she says. “It was really painful, and I had to go to a rheumatologist who put me on a steroid. I was freaking out.”

Kardashian shares that she regularly eats plant-based meals, but during her diet, she switched to eating real meat.

She tells Allure she has since cut out meat again and that the psoriatic arthritis has “calmed down.”

Dr. Jonathan Chan, a rheumatologist in Vancouver and clinician investigator at Arthritis Research Canada, says while dietary changes can’t cause the inflammatory condition, there are other possible risk factors.

What is psoriatic arthritis?

Psoriatic arthritis is a chronic type of inflammatory arthritis often diagnosed in people with psoriasis, which is a skin disease that causes a rash with itchy, scaly patches. According to Mayo Clinic, the inflammatory condition can also cause pain, stiffness and swelling in and around the joints.

Trish Barbato, president and CEO of Canada’s Arthritis Society, says it’s important when celebrities speak out about conditions like this one, because it helps put “a spotlight on the devastating impact this lifelong condition has on people’s lives.”

“We need to change the conversation about this disease and acknowledge that it’s certainly not ‘just’ arthritis,” Barbato adds. “By speaking out about their symptoms and their pain, they are strengthening the community of support that people living with arthritis desperately need.”

The cause of this inflammatory condition is unknown, but The Cleveland Clinic says it may develop from a combination of genetic and environmental factors.

Having psoriasis is the greatest risk factor for developing psoriatic arthritis.

Kardashian has been open about her psoriasis diagnosis, a condition she’s had since her mid-20s. But there is a genetic connection in Kardashian’s case, since her mother, Kris Jenner, also has the condition.

Anyone can develop psoriasis, but it is most common in adults between the ages of 30 and 55.

Can a change in diet cause the autoimmune disease?

As a rheumatologist, Chan says there is little research to definitely say if diet can cause psoriatic arthritis, adding that more investigation is needed.

“There’s a lot of anecdotal reports about dietary changes impacting skin, and joints and various other diseases … there’s some theoretical possible links,” he explains. “In reality, there’s no proven studies that that can kind of give a causal link to that.”

Dr. Sian Bevan says while there is no “miracle diet” for the condition, food can play a significant role in managing symptoms.

“Eating a healthy diet rich in vegetables, fruits, whole grains, lean proteins and healthy fats — and moderating certain foods such as red meat, alcohol and sugar — can help manage weight, reduce inflammation as well as improve energy levels and mood, which are all factors in how we experience arthritis pain,” the Arthritis Society chief science officer says.

What are the signs and symptoms?

According to the National Psoriasis Foundation in the United States, psoriatic arthritis can develop slowly with mild symptoms, or it can develop quickly with more severe symptoms. It can also be difficult to diagnose, since symptoms can vary from person to person.

The most common symptoms include swollen and painful joints, swollen fingers and toes, changes to the nails as well as scaly or silvery skin patches that itch and burn.

“If you have a history — unknown history of psoriasis — and then you start developing like a persistently painful, swollen joint, that should raise a red flag,” Chan says. “When I say persistent, I mean if it’s lasting more than a few weeks, hot and swollen, then you should seek medical attention.”

Chan says recurring lower back pain, especially in a young person, and repeated tendinitis can also be signs of the condition.

Flare-ups happen when symptoms are worse than usual. The American College of Rheumatology says some people have occasional flare-ups, while others can have them persistently, and it could lead to joint damage if it’s left untreated.

There are several potential triggers that can cause a flare-up:

There is no cure for psoriatic arthritis, but there are treatment options that will control inflammation in the affected joints and help with pain.

A doctor may prescribe a type of medication to help treat the condition, like nonsteroidal anti-inflammatory drugs or disease-modifying antirheumatic drugs (DMARDs), which slow the progress of the arthritis and save joints and other tissues from permanent damage.

When it comes to treating the condition through diet, Chan says he sees many patients in Vancouver who think a change in diet can help “fix” the condition.

Even though the studies on diet helping with psoriatic arthritis are inconclusive, Chan says he wants his patients to get better and may incorporate dietary changes into their treatment plan.

“It’s something that hopefully we’ll get more research into it [diet and autoimmune diseases],” he says. “I think it’s important to look into it, but we don’t have any strong recommendations right now because we just don’t have any quality research to support it.”