NEP position papers | Proposal to keep eggs, meat out, introduce Sanskrit for all 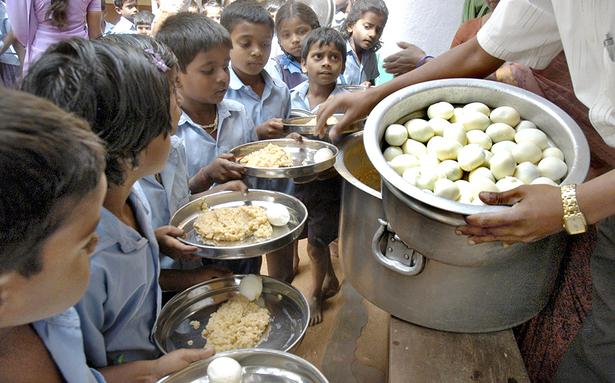 A report on ‘Knowledge of India’ described the Pythagoras theorem as fake and the apocryphal story of Newton’s apple as propaganda.

Serving eggs to schoolchildren in midday meals will lead to discrimination between the students and given the small body frame of Indians, any extra energy provided through cholesterol by regular consumption of eggs and meat will lead to lifestyle disorders: these are some of the things described in the National Education Policy (NEP) position paper on health and well-being by an expert committee, headed by John Vijay Sagar, Professor and head, Department of Child and Adolescent Psychiatry, NIMHANS.

“Serving different foods to the same graders will lead to an imbalance in the nutrient distribution among children. For example, serving other recipes or foods to the same graders, such as egg versus grams, or egg versus banana, leads to a nutritional imbalance among children. Additionally, children develop complexes that result in emotional disturbances among friends. Treating all children equally and with no discrimination is authentic Indian philosophy or dharma,” the committee says.

The committee has recommended that “ satvik food” such as groundnuts, sesame laddu/chikki with jaggery are “natural foods.” These help to overcome stunted growth and anaemia, it says.

The State government is already providing boiled eggs and bananas to government and aided schoolchildren, aged between 6 and 15 and suffering from malnutrition, anaemia, and deficiency of proteins in the seven districts of Kalyana Karnataka and to the pre-primary students of Karnataka Public Schools. The government is planning to extend this programme across the State too.

For implementation of the NEP, it is the mandate to upload position papers on the NCERT website. The Ministry of Education will use these papers while it compiles each topic, take suggestions, and build the national curriculum framework.

The State government has formed 26 committees to prepare position papers on various topics in school education and to submit to the NCERT.

For instance, the Dr. Sagar-headed committee has recommended in the area of nutrition: “Moderately low fat, and zero trans-fat food is needed to address over-nutrition. Hence, while planning midday meals, cholesterol-free, additives-free, such as eggs, flavoured milk, biscuits, should be forbidden to prevent obesity and hormonal imbalance caused by excess calorie and fat. Lifestyle disorders like diabetes, early menarche, primary infertility in India are escalating, and studies conducted across the countries suggest that animal-based foods interfere with hormonal functions in humans. The gene-diet interactions indicate what is best for Indian ethnicity, and the natural choice of the race needs to be considered”.

The committee also recommended, “Stories about Bheem and Hanuman’s eating habits help children link eating the right food to valour, courage, and success. The incorporation of Panchatantra and folk stories about healthcare to be incorporated.”

Experts have expressed concerns over some of the proposals made in the position papers.

The committee for knowledge of India, which was headed by V. Ramanathan from IIT(BHU), Varanasi, report described that Pythagoras theorem is fake and the apocryphal story of Newton’s apple is propaganda.

The committee also proposed to “preferably” teach all children Sanskrit as a third language and advocating learning of Manusmriti and introducing ancient numerical systems like Bhuta-sankhya. Gravity and Pythagoras have roots in Vedic maths. Many of the mathematical theories have origins in some of the ancient sages, the paper says.

The Dr. Ajakkala Girisha Bhat-headed committee’s language education position paper proposes a three-language policy with Kannada being mandatory as a language from Classes I to XII. The paper mandates that the medium of instruction till Class V should be the mother tongue or the home language or the local language or Kannada.

For other classes, the medium of instruction has to be bilingual. Teachers should use mother tongue or Kannada and English, it says, adding that children can be allowed to write the exam in either of the languages. This is applicable to all boards, including CBSE, ICSE, and international schools.