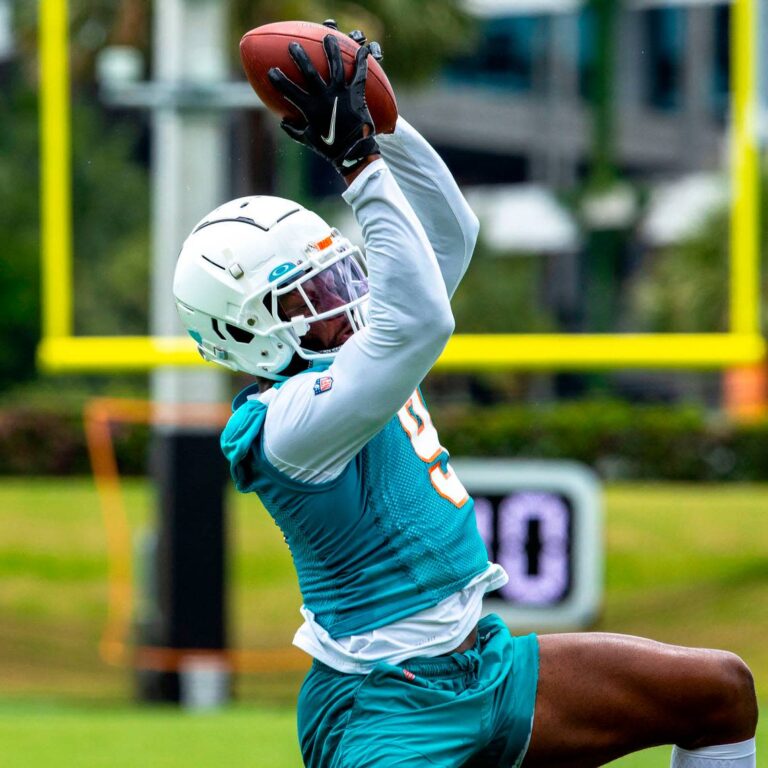 Noah Igbinoghene made a significant lifestyle change this offseason.

He became a vegan, which meant cutting out meat from his diet and a tougher sacrifice – giving up his mother’s home cooking.

It may have Igbinoghene on the path to an even more important change on the field that he and the Dolphins would welcome heading into the 2022 season.

One that could put haunting memories of Igbinoghene being overmatched against some of the league’s best receivers such as Buffalo’s Stefon Diggs far in the rear-view mirror, they hope.

Igbinoghene, a former first-round pick, has spent the bulk of his first two years in the NFL playing as a reserve behind All-Pro Xavien Howard and Byron Jones.

But with Jones on the PUP (Physically Unable to Perform) list following leg surgery, and likely to be limited or unavailable by Week 1, Igbinoghene once again has an opportunity to live up to the expectations the franchise had for him when they chose him 30th overall out of Auburn.

Igbinoghene, 22, played just 78 defensive snaps last season and has played only 365 combined in his first two years in the league, starting only three of the 23 games in which he’s played.

His limited action in 2021 included his third career start in the Dolphins’ loss to the Jaguars in London. Igbinoghene allowed a 139.3 passer rating in his coverage area — five completions in seven targets for 64 yards and a touchdown last year.

The first time Igbinoghene had such an opportunity to make an impact when either Howard or Jones were hurt, it resulted in a dismal performance.

In his second career game, Igbinoghene was targeted 11 times and gave up seven catches for 145 – most of which came against Diggs, who finished with eight catches for 153 yards and a touchdown in that Bills’ 31-28 win. Two weeks later in his second career start, Igbinoghene also struggled against Seattle, giving up a costly touchdown against David Moore. It overshadowed some marginal improvement down the stretch of his rookie season as Igbinoghene finished with a 133.9 passer rating in his coverage area (17 completions in 28 targets for 306, three touchdowns and no interceptions).

“Honestly I still think about it now, and not like anything like ‘I’m thinking about the past’ or anything like that, but he’s a high-top receiver and that’s somebody I want to – if I want to be the player I want to be, I’ve got to be able to beat those guys every single time I go against them,” Igbinoghene said. “And the Buffalo Bills, they’re really, they’re a high-level team and he’s the top receiver there. So just to be able to go against him, I’ll cherish the opportunity just to go against him again and do the opposite of what happened.”

Two factors appear to be helping Igbinoghene become much more prepared for the next time he faces an elite receiver like Diggs.

One is having his own elite pass catcher to go against every day in camp in Tyreek Hill, plus the chance to match up with rising star second-year speedster Jaylen Waddle. During a one-on-one drill on Friday, Igbinoghene matched up against Waddle and tipped a pass before Waddle was still able to hang on to it for a catch.

“More reps against Tyreek Hill hasn’t hurt anybody unless they have confidence issues,” Dolphins coach Mike McDaniel said. “Those types of things – you’re on an island as a corner. You have to have a short memory, and it is – you’re not facing the direction that the offense is trying to go. You’re trying to guard an elite athlete. It is difficult, but this opportunity is only going to help him moving forward, so I’m excited for that.”

The second has come from the coaching side where Igbinoghene is learning from two of the Dolphins’ all-time best to play at the position.

The duo combined for 75 career interceptions (Madison with 38 and Surtain with 37) and formed one of the best cornerback tandems in franchise history.

Igbinoghene said he’s picked up a lot from Madison in terms of how to excel in press coverage, which was a specialty for the former two-time All-Pro cornerback.

Igbinoghene, who is entering the third year of a four-year, $11.25 million completely guaranteed contract, figures to be competing with Trill Williams for the fourth cornerback spot big picture. But he has an opportunity for more snaps opposite Howard should Jones be limited going into the season or not be ready by Week 1 as McDaniel has said he expects him to be.

Igbinoghene is due $1.6 million this season and $1.1 million next season, but isn’t guaranteed to stick on the 53-man roster if he doesn’t perform to expectations. Williams, who is also under contract next season (making $825,000 this season), doesn’t have a guaranteed contract.

“It’s a tremendous opportunity,” McDaniel said. “That’s what the team needs to be the team that we all want it to be, which is that people recognize each and every rep as an opportunity, and you utilize it to your best advantage.”