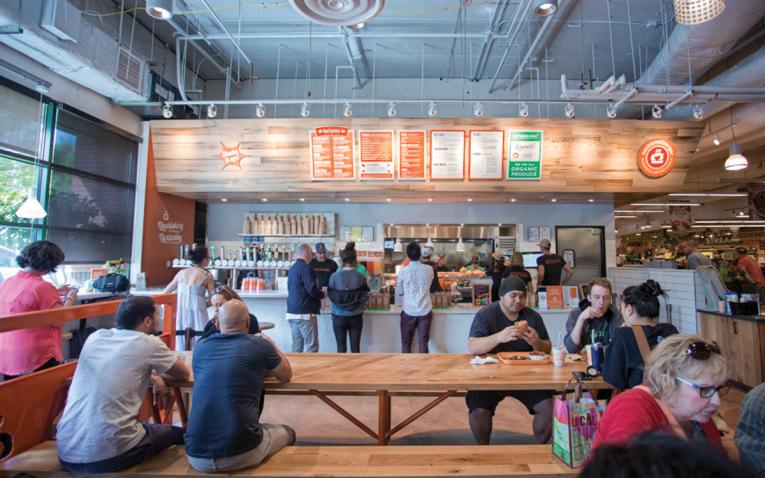 Matt de Gruyter couldn’t fathom the idea of a vegetarian or vegan diet growing up. He didn’t even know any vegetarians. Now, he is the cofounder and CEO of the 100 percent plant-based burger joint Next Level Burger.

The fast casual has eight locations in Oregon, Washington, New York, California, and Texas, six of which are located in Whole Foods markets. Its next opening in Denver is a homecoming of sorts for de Gruyter’s family—he and his wife Cierra, who cofounded the brand with him, met while attending Metro State University. It was also where their first child was born.

The Denver location will be the first flagship store, and is slated to open August 20. It’s a 2,100-square-foot standalone restaurant with a 40-seat dining room located in close proximity to Denver University.

Next Level Burger’s journey began when Cierra de Gruyter started researching, and eventually adopting, the vegan diet. The move felt alien to de Gruyter, especially being raised to eat meat at every meal. To him, the diet did not compute—no meat, eggs, or dairy products seemed like an overreaction.

This was the catalyst for de Gruyter choosing to live a healthier lifestyle—he wanted to be around when his kids get older. As he reached this epiphany, de Gruyter started to read some of his wife’s books about the vegan diet. The science and beneficial changes began to resonate with him. After initially poking fun at his wife for going vegan, he tried it out himself.

After two weeks, he was hooked and hasn’t looked back since.

At the time, de Gruyter was working in private equity in the oil and gas industry. Now both vegan, Cierra kicked around the idea of a plant-based burger chain. She told him they should start it, jokingly, and they laughed off the possibility.

The idea never left the couple, however. Three years later, de Gruyter was still in the oil and gas industry and doing well. He made his first million by the time he was 30. Though he was grateful he could provide for the family, he felt something was missing—he wasn’t leaving a legacy. In May 2013, that idea for a plant-based burger restaurant became more possible in their minds.

He resigned from his job in Newport Beach, California, and moved their family to Oregon to start Next Level Burger. They left California in August 2013 and opened the first store the following July.

“We started Next Level Burger because we wanted to make a bigger difference than we were making,” de Gruyter says. “We wanted to drive a legacy, and we wanted to provide an awesome plant-based option that was going to check all the boxes of being vegan, but also a commitment to organic produce, a commitment to 100 percent non-GMO ingredients, and a commitment to living wages.”

Paying a living wage to employees is an important commitment for Next Level Burger, de Gruyter says. Workers at their stores make an average of $19 per hour plus tips. This comes at a time where labor in the restaurant industry is especially difficult to find and retain. The restaurant industry gained 74,100 jobs in July, according to the U.S. Bureau of Labor Statistics, but the number of jobs in the industry has not yet returned to pre-pandemic levels.

“You can always bank on the fact that if you decide to eat a vegan meal compared to a standard meal, that you’re going to cut carbon emissions in half or more in that meal,” de Gruyter says.

Next Level Burger wants to quadruple its unit count through 2025, but de Gruyter emphasizes he wants to do it wisely.

“It is not about getting to a certain number of restaurants by a certain year,” he says. “It’s about building a brand, a company, a business that can stand the test of time and can make a difference not over the next two years or the next five years, but over the next 30 to 50.”