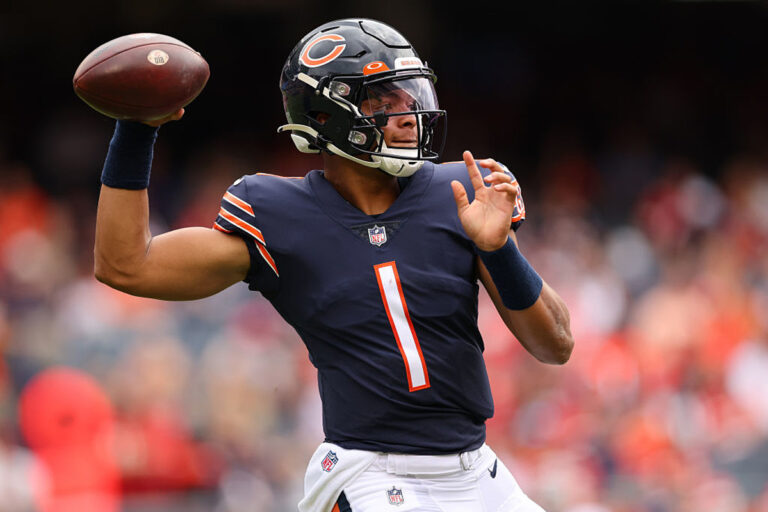 As the starting quarterback for the Chicago Bears, Justin Fields joins the roster of professional plant-based athletes who swear that avoiding meat and dairy and loading up on plant-based proteins helps improve performance, and makes him lighter and faster.

Fields fuels up with plant-based protein the same way tennis great Novak Djokovic and a growing number of other plant-based athletes do, including Venus Williams, NBA superstar Chris Paul, and 7-time Super Bowl winner Tom Brady. Every day it seems more athletes are choosing to skip meat and dairy and rely on plant foods for their winning nutrition.

Fields went vegan back in May of 2020 when he was quarantined with his family and they set out to eat plant-based as a one-month challenge. By the time the month was over, he was the only one who continued on the diet. “I really liked the way it made my body feel,” Fields recalls. So while the rest of his family went back to eating meat and dairy,  Fields is still going strong.

Drafted as the Bears’ number one choice last year out of Ohio State, Fields has already had a stellar first season behind him. He chalked up seven passing TDs and two rushing TDs and credits his new plant-based diet with feeling “lighter and faster.”

In an exclusive email interview with The Beet, Fields shares why he initially made the decision to go vegan, how it makes him feel, and everything he eats in a day, including what he eats to fuel up for a game and his favorite vegan recipe that you can create at home.

The Beet: Why and when did you go vegan?

Justin Fields: I started during quarantine as a one-month challenge with my family going into my last season at Ohio State. Once I did it for a few weeks I actually really liked the way it made my body feel. The rest of my family stopped once the challenge was over, and I just kept doing it.

The Beet: How has going plant-based affected your athletic performance?

Justin Fields: It’s changed the way I feel and the way I perform dramatically. I just feel so much lighter and faster. Football as a sport is so hard on your body so I just want to do anything I can to have the longest career possible.

The Beet: What do you eat in a day?

Justin Fields: I normally start off my day by drinking some coffee, lots of water, and eating some fruit. I keep breakfast pretty light compared to my other meals because my days start really early with training right now.

For lunch, I will typically try to eat some vegan chicken nuggets or maybe a vegan burger. I try to get carbs in – either potatoes or rice for energy.

My dinner is also pretty similar to my lunch, and at this point in the day, I try to make an effort to get more greens in.

At the end of the day, I always get myself a chocolate Pro Elite OWYN shake to finish off my day and up my protein intake.

What do you eat before and after a game?

Justin Fields: Before a game, I don’t eat too much as I don’t want to upset my stomach, but after the game, I almost always grab an OWYN shake for recovery. Not only do I like the way the OWYN shakes make me feel but I really enjoy them almost like a dessert.

Justin Fields: My favorite plant-based recipe to make is falafel burgers. I normally eat those a couple of times a week. I personally don’t feel like they taste any different than normal burgers and they have a lot of added benefits, so I love eating those. As a side, I’ll normally do sweet potato fries too.

For more exclusive content on vegan athletes, check out our column.

20 Athletes Who Went Vegan to Get Stronger