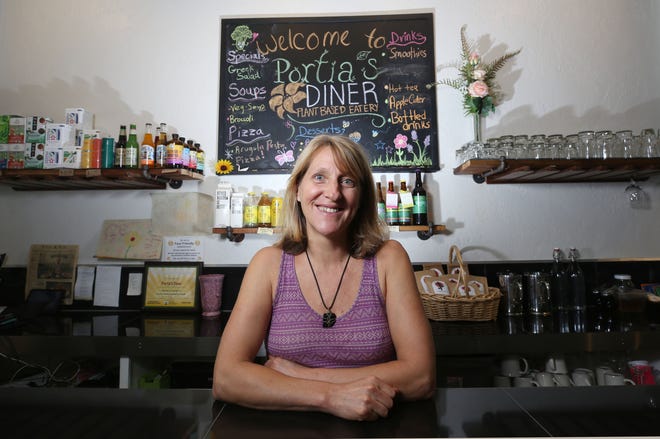 Ryan Bernstein dropped by Portia’s Diner for the first time July 27, just three days before the vegan restaurant closed its doors for good.

Bernstein, a pescatarian, was dropping his car off at nearby Bernie’s Garage & Auto Shop and decided to grab a bite to eat.

“I thought I’d check it out,” said Bernstein, who lives on the South Side.

After two and a half years in business, Portia Yiamouyiannis decided to close shop, 3269 N. High St., after failing to reach a lease agreement with the landlord.

Five years ago, Yiamouyiannis purchased much of the equipment from the previous tenant, Whole World Natural Restaurant & Bakery, a vegetarian destination that opened in 1978.

But she had difficulty getting the small space ready. What was to take two months turned into 36 months.

Yet, Yiamouyiannis said she has no regrets opening the spot, preferring to see her effort as positive.

“I feel like I accomplished something, so that’s a good thing,” she said. “I like challenges, so I did it.”

The cozy, brightly painted diner had a few tables and seating at the counter.

It was known for homemade breakfast items, wraps, salads, soups, pizza and desserts – all created without the use of dairy or other animal products.

She said she developed many recipes at the café, open nine and a half years, before opening the diner. Some diner classics will appear on the café’s menu, she said.

Customer Auzzy Om of the University District said he visited the diner two to four days a week and often visited the café, too.

“It’s kind of amazing because I can walk down the street to eat at the diner and I can’t really easily walk to the other one,” he said of the café on Indianola.

Ark said he loves to cook, and even hosted a pop-up pancakes and pour-overs event at the diner, and would like to pursue his passion in addition to an engineering career.

“It’s a little said,” he said of Portia’s Diner closing. “I’m going to miss the food a lot.”

Yiamouyiannis said he recently purchased a food truck and plans to be at local festivals starting in August.

She hasn’t ruled out opening another diner, but it must have parking, an open kitchen and attractive landscaping around the building.