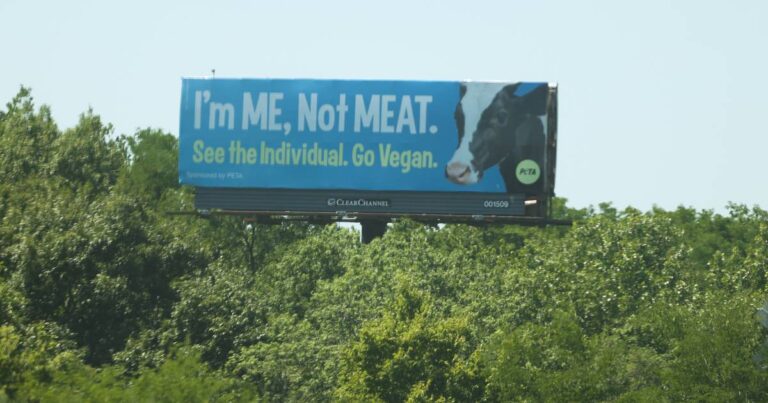 If you’re driving on Interstate 80 near Illinois State Route 7, you might see a billboard featuring a cow and the words: “I’m ME. Not MEAT. See the Individual. Go Vegan.”

PETA – People for the Ethical Treatment of Animals – recently placed that billboard in honor of the cows that were injured and killed in an April 19 crash on Interstate 80 between Houbolt Road and Larkin Ave.

The billboard will remain in place for one month, Amber Canavan, campaign manager for PETA said. Canavan said PETA places other memorial billboards across the U.S. to honor animals after they are killed in transport truck crashes.

“These crashes are fairly common,” Canavan said, “which causes even more suffering to the animals who are already suffering when they get to the slaughtering house. These cases add extra trauma and death to the whole system.”

In 2021, trucks carrying animals for food were involved in at least 76 crashes and fires, according to PETA.

On April 19, Bradley E. Pate, 51, of Virginia, was hauling 33 cattle in a cattle hauler on Interstate 80 when, “for unknown reasons,” the hauler went off the roadway and struck another semi, throwing 16 cattle onto the interstate, according to the Illinois State Police.

Pate was transferred to Ascension Saint Joseph Medical Center with life threatening injuries. Illinois State Police “put down” two of the cattle due to their injuries, state police said.

Local farmers on horseback helped gather the remaining cattle, that were hauled away to a local storage location.

And PETA issued a statement about the incident.

“Cows died in agony as a result of this reckless and preventable crash, while the survivors were likely rounded up and taken to be killed for their flesh,” PETA Executive Vice President Tracy Reiman said in a news release from PETA. “PETA’s memorial encourages anyone disturbed by the thought of these terrified animals suffering on the roadside or ending up under the slaughterhouse knife to go vegan.”

By adopting a vegan diet, people can save the lives of “nearly 200 cows, pigs, chickens, and other animals,” PETA said.

Canavan hopes motorists who see the billboard will take a few moments to think about the suffering animals who often share the highways with them.

She hopes people will also “think about the animals killed in crashes, think about the ones on their plates and how they can just so easily spare them by choosing the vegan burgers.”

Canavan said she hopes people will visit peta.org and to education themselves about the “factory farming” of animals.