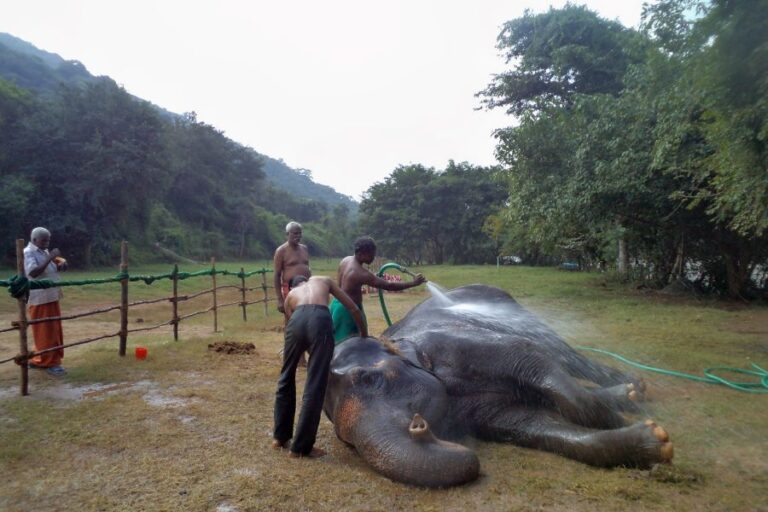 Temple elephants in TN suffer from lack of a fibre rich diet and a dedicated veterinarian support; the mahouts fail to understand elephant behaviour, which turns out to be harmful for the pachyderm in the long run The ill health of two temple elephants in Tamil Nadu has once again brought to the fore the issue of how captive elephants are not adequately cared for with a fibre-rich diet and dedicated veterinarian support. Temple elephant mahouts too seem to lack an understanding of elephant behaviour, which turns out to be harmful for the pachyderms in the long run.

While Parvati, the elephant in Arulmigu Meenakshi Sundareshwarar temple in Madurai, has been diagnosed with a rare case of lens luxation and cataract in the left eye, Gandhimathi, who belongs to the Nellaiappar Gandhimathi temple in Tirunelveli, has been reportedly diagnosed with diabetes. In fact, to ensure the elephant does not suffer from foot and joint pain, some devotees and the traders near the temple gifted leather sandals to the elephant recently.

According to state forest department data submitted to the Madras High Court, as of September 2021, there are 31 temple elephants across Tamil Nadu. Despite allegations in the past that the elephants are ill-treated, the state government has maintained that it takes all the necessary efforts to ensure their welfare.

Tamil Nadu is also famous for conducting the 40-day elephant rejuvenation camps every year to give the pachyderms a break from their routine life. They also undergo intensive health check-up at these camps. In addition, in February 2022, the Hindu Religious and Charitable Endowments department came out with standard operating procedures for the care of temple elephants. Despite all these efforts, most temple elephants suffer from poor health.

Lack of proper diet and exercise

In 2008, N Baskaran, professor, department of zoology and wildlife biology, AVC College, Mayiladuthurai, who is an authority on Asian elephants, revealed in a study that elephants in private facilities and temples are fed significantly less stall feed in quantity and quality, as compared to the elephants under the forest department who also have access to natural feed in the wild besides a supplementary diet.

The captive elephants in the state are provided with 11 species of green fodder and browse (leaves of trees and shrubs) as stall feed, as well as a supplementary diet of grains, millets and pulses in cooked form and natural feeds. While the forest department provides captive elephants more of finger millets, the private keepers and temple authorities provide them more rice.

Further, the study said, “The insufficient supply of minerals and vitamins due to inadequate quality and quantity of green fodder and the supplementary diet in the case of private and temple elephants could affect their health conditions. A considerable number of elephants in the temple facility with health problems like arthritis, blindness and overweight could also be the result of inadequate nutrition and exercise.”

Talking to The Federal, Baskaran said that most temple elephants are plagued by joint problems in their legs because they are not given enough physical exercise. “The elephants in the temples are always chained and kept idle in the same place for days together. The elephants experience a lot of frustration and if this is not addressed properly, it turns into a chronic level of stress. The stress is expressed through its behaviour. Unless the temple authorities and mahouts have understanding about elephant psychology, the physical and mental problems of the elephants continue to grow,” he said.

Baskaran suggested that since most temples in the state have large swathes of lands, the authorities can allow the elephants to sleep in the natural environment by chaining just one of their legs at night.

Also read: Why mice and humans are more likely to die of cancer than elephants

According to Kalidasan, who has served in various committees appointed by the state forest department to study the deaths of wild elephants and the management of elephants in captivity, elephants are basically wild animals.

“Though we’ve managed elephants in captivity for thousands of years, it has not been domesticated yet. The elephants in the wild eat grass, leaves, plants, tree branches and barks. Whereas temple elephants don’t get this kind of a variety in their food. They are given jaggery, fruits and sugarcane. But what they require is a fibre-rich, balanced diet, which is the need of the hour,” said Kalidasan.

The expert wanted the temple authorities to follow some of the measures given in the SOP: keep the elephants in a shadowy area, avoid making them lie on concrete floors and ensure they are taken for a walk for a few hours every day. “Also, instead of conducting 40 day long camps at one place for all the temple elephants, a camp can be organised for five elephants at a time in the vicinity of the temples in every region,” he suggested.

Kalidasan stressed that temple mahouts should be hired from Malasar and Kurumbar communities because they are traditionally involved in training elephants and they understand the behaviour of the temple elephants better.

“These mahouts are appointed in elephant training camps. They never use ankush (elephant goad with an iron hook) and instead use a small stick. These elephants in time become a member of the mahout’s family. This kind of understanding and rapport is lacking among most temple mahouts,” he added.

Above all, Kalidasan said that each temple elephant should have a dedicated veterinarian. The temple authorities should maintain a health register for each elephant and it should be periodically reviewed just as it is done in the captive elephant camps.

Talking about the need to bring veterinarians from Thailand to treat the elephants for problems like cataract, Basakaran said most elephants are in captivity in Thailand and therefore their veterinarians have a better expertise in treating the captive elephants.

Agreeing with Baskaran, Dr Asokan, a wildlife veterinarian with more than 35 years of experience and based in Erode district said that the expertise of veterinarians like him are “underutilised”.

“In neighbouring Kerala, each temple elephant has a dedicated veterinarian who looks after the elephant for many years. Whereas in Tamil Nadu, every other alternative day, different veterinarians treat the elephants and hence there is no consistency. Similarly, a veterinarian from one forest division is not taken seriously by the forest officials of another forest division. This kind of ego politics puts the lives of these precious animals at risk,” he added.