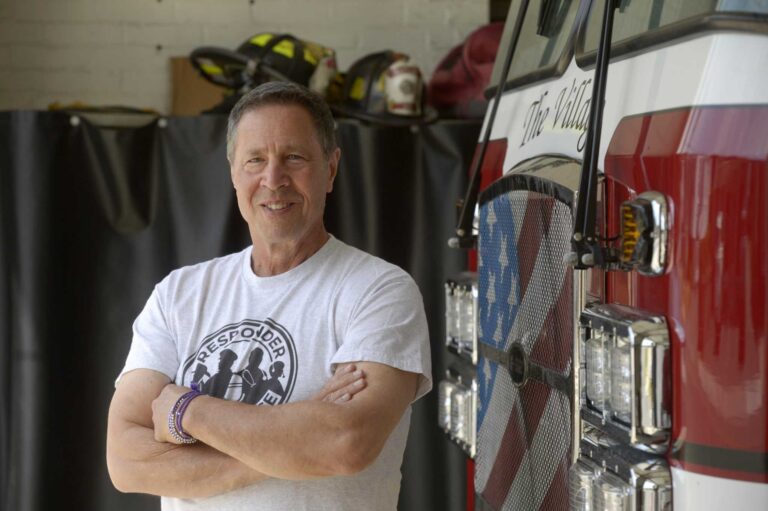 RIDGEFIELD — Several years ago, former Ridgefield firefighter David Dachinger was having trouble sleeping, as a result of some experiences he had while on the job.

One particular call he kept remembering was being inside a building when it burst into flames.

“There was elements to that call that troubled me for months afterwards,” said Dachinger, a West Harrison, NY resident, who retired last year after 13 years as a firefighter. “It was really starting to interfere with the quality of everyday life and doing my job.”

EMDR is just one of the topics that Dachinger talks about on a weekly video podcast he co-created, called Responder Resilience.

The podcast, which is free, airs every Wednesday at 7 p.m. on BBSRadio.com, YouTube, Apple podcasts, Spotify and Facebook. There’s a new topic discussed in each 45- to 55-minute episode.

The podcast features expert guests sharing wellness information and stories of first responders who incorporated the strategies and tips from the experts, into their lives.

Dachinger said he created the podcast out of concern for first responders, “who are experiencing an epidemic of duty-induced mental and physical health issues.”

“Peer support is a big topic in the first responder world,” Dachinger said. “It’s a system where if somebody’s got a challenge, a problem, an issue going on — they can seek out someone who’s more of a peer than a superior and talk about it.”

Another episode dealt with marriage and relationships.

“We had a married couple, a Seattle fire captain who’s retired, and his wife,” Dachinger said. “They wrote a book about firefighter marriage so we had an episode on with the challenges of being married to a firefighter from the spouse perspective and then from the firefighter’s perspective.”

To co-host the show, Dachinger partners with Stacy Raymond, a clinical psychologist with an office in Ridgefield; and Bonnie Rumilly, an EMT, trauma therapist and licensed clinical social worker.

“We do a mix of local guests and national guests,” Dachinger said. “Some of our guests are from the NYPD (New York Police Department) and the FDNY (New York City Fire Department).”

The show has featured the chief of the Wilton Police Department, a Ridgefield fire captain and the Danbury deputy fire chief.

There is no topic off limits — recently, a term known as institutional abandonment was addressed.

“It’s when someone feels like their agency or department is not supporting them adequately. Very often that happens either with their mental health or in a situation that might just be really difficult and challenging for them at work,” said Rumilly, who has an office in Wilton.

She said another term the podcast has spoken about is called betrayal trauma, “where people are not there to support you in your time of need. These jobs are so hard. I mean, what first responders have to do on a daily basis is completely abnormal — going on calls with child fatalities or suicides. It’s trauma all day, every day.”

The entire work involving the podcast, which includes editing and adding commentary, takes 20 to 30 hours a week.

Birth of the podcast

Raymond and Rumilly are facilitators of a peer support group for first responders for which Dachinger is a member.

He said he was impressed with them both, from the time he first met them.

“I saw the two of them had this amazing chemistry and ability to relate to responders, to talk to some of the challenges they were facing, and to do it in a really powerful way. At the same time, when things are getting too serious, they know how to keep lightning it up,” Dachinger said. “As I was watching the two of them do what they do, I’m like, I think we could create a podcast with the two of them and myself, and combine our experience and skill sets to talk about some of the core issues that are facing responders in mental health and also in physical health.”

The Fairfield County Response Team and other groups support the podcast. The initial startup was about $6,000. The show is seeking sponsors.

Dachinger said he hopes to syndicate the podcast.

“It’s on several platforms now but we would love to grow it to a place where we can get it out to even more responders, and just keep reaching more people,” he said.

He added there’s a stigma to many first responders when asking for help.

“There’s a whole mentality about to do the call, suck it up, go to the next call,” he said. “Sometimes, these traumas kind of accumulate and there’s no opportunity for someone to ask for help or it’s sometimes uncomfortable for them to ask for help.”

Dachinger said he’s happy to be able to devote his time to the podcast, since it’s about topics that are so close to his heart.

“I had a wonderful career and I was blessed to work in Ridgefield,” he said. “When you retire, it can really leave a big void in your life if you don’t have something else that takes up a lot of your time, so this podcast has really been the perfect mix of my loving to do video and audio and stay connected with the first responder world.”