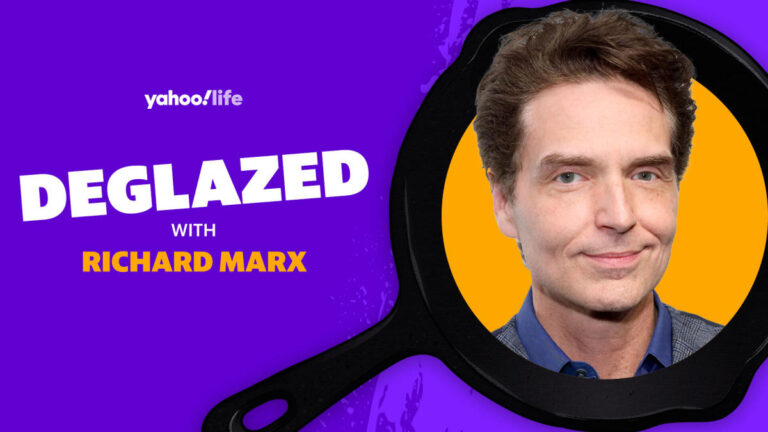 Because food connects us all, Yahoo Life is serving up a heaping plateful of table talk with people who are passionate about what’s on their menu in Deglazed, a series about food.

Grammy-winning artist Richard Marx is best-known for his ’80s and ’90s chart-toppers, but the 58-year-old singer is currently in the midst of a worldwide tour promoting his upcoming album, Songwriter, which will be released in September 2022.

On tour, the iced coffee-drinking vegan will visit cities from Paris, France to Des Plaines, Ill. And, no matter which city he brings hits like “Right Here Waiting” and “Hold on to the Nights” to, Marx says he’ll be on the hunt for three specific destinations in each: a vegan restaurant, a “cool sexy” bar and a locally-owned coffee shop.

“I love little local mom-and-pop coffee places,” Marx tells Yahoo Life. “I feel like that’s the heart of the town.”

As for his vegan lifestyle, Marx says the transition was gradual. He stopped eating red meat after moving from Chicago, Ill. to California when he was 18, then eventually became a pescatarian.

Marx says several documentaries got him thinking about going fully plant-based with his diet. When he and his wife, actress and model Daisy Fuentes watched the 2013 documentary Blackfish, about the capture and treatment of orca whales, his mind was made up.

“There’s a really emotional scene where these a**holes take a baby orca from the water and pull it out of the water and the family of the baby orca start crying — wailing in sadness,” Marx says. “It moved both Daisy and me. I paused the movie. I put my head down and I looked at Daisy. I just had this breakthrough thought, ‘How do I know the family of the salmon I ate last night didn’t do the same thing?'”

That was about seven years ago. Since then, Marx says he’s been enjoying the vegan dishes Fuentes prepares for him. When they aren’t traveling for work, Marx and Fuentes spend most evenings in their California kitchen, where Fuentes does the cooking and Marx makes the martinis while music — from artists like Sade — plays in the background.

Marx says Fuentes has perfected animal-free versions of all the meat-based dishes they used to enjoy. “She does these vegan tacos that are better than I would get at any restaurant,” he says. “Same with her Impossible burgers she makes from scratch.”

“Probably my favorite thing she does is a Bolognese with ground Impossible meat that she seasons and adds peppers and onions,” he adds. “Oh [and] her eggplant Parmigiana — she uses plant-based cheese and she’s able to get it to melt. It’s so good. That’s it, I’m going to ask her to make that tonight.”

Marx says he often hears people say they can’t go vegan because they’re hesitant to give up eggs or fish. “Well, yeah you can give up those things,” he says. “You can make the choice, and you do it. Your body doesn’t need them.”

The singer, whose new single “Same Heartbreak Different Day” is out now, says maintaining a plant-based diet has gotten easier over the years as better vegan options continue to hit the market. He’s a fan of anything from the Impossible brand, as well as Just Egg plant-based egg substitutes and the dairy-free candy brand Unreal.

It’s when he’s on the road that eating can become a bit of a challenge: He uses the app HappyCow, a vegan and vegetarian restaurant guide, to find suitable restaurants while traveling, which he’ll be doing a lot of throughout the rest of the year thanks to his new album.

Marx says Songwriter, available on Sept. 30, is like no album he’s ever heard because it’s a compilation of different genres. “I have a history of writing songs with so many different artists and so many different genres, and it finally occurred to me that there’s no reason I couldn’t do an album like that as an artist,” Marx says. “I’ve always sort of stayed in a lane to some degree. This time I thought, ‘I want to try this.’ It’s pretty ambitious.”

Fuentes will likely be joining Marx on many of his tour stops, helping him research each city’s best bars, vegan restaurants and coffee shops. Marx says although dinner on the road is sometimes French fries and a martini, there are times he stumbles upon a gem of a plant-based restaurant in the least likely of places, thanks to his wife.

“Daisy spends a lot of time on the side of the stage taking pictures and watching the audience, but she’s also back and forth into my dressing room, doing recon,” Marx says. “As I’m saying goodbye to the audience and I’m walking off stage, she’s there to greet me with a fresh martini and the name of the restaurant we’re going to for dinner.”

Wellness, parenting, body image and more: Get to know the who behind the hoo with Yahoo Life’s newsletter. Sign up here.