Shoreline Dr. set to shrink to 2 lanes as part of road diet test 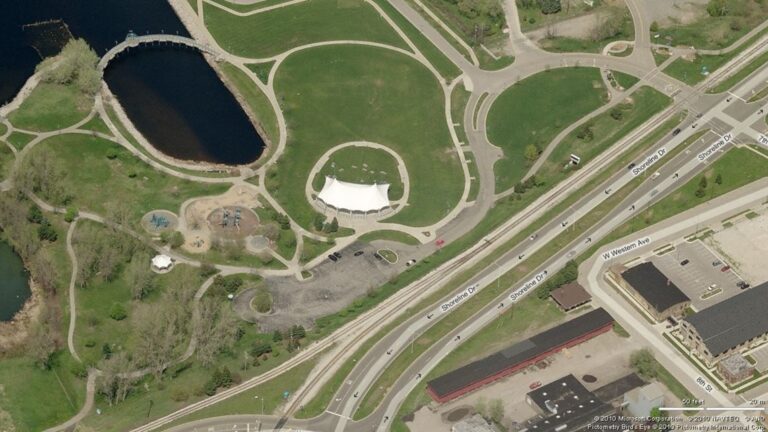 Changes to one of Muskegon’s main roads aren’t permanent, but Muskegon Public Works says the road is wider than it needs. Tests will show if changes are needed.

MUSKEGON, Mich. — Thousands of drivers use Muskegon’s Shoreline Drive every day, but soon one of the city’s main roadways will be half the size. A road diet is set to start in August, turning the mile long stretch between 7th Street and Terrace Street from four lanes down to two.

A road diet is a study meant to test if the size of a roadway is appropriate, or if it should be changed to reflect the needs of the city.

Leo Evans, Muskegon’s Public Works Director says the road was built wider than necessary, cutting downtown off from the waterfront. While the changes starting in August won’t be permanent, the results could inform how the city moves forward with the stretch of road in the future.

“We can test to say this is a four lane boulevard, and based on the traffic volume, the disconnection, the wideness of it, the difficulty for pedestrians, that it really should be a two lane road,” Evans said. “What that looks like when you actually build a two lane road, what you do with that extra space? I don’t really have an answer for that right now.”

Possible critiques against changing Shoreline Drive include increased congestion and longer commute times. The tests will show if commutes are negatively impacted, and if the effects are too detrimental to traffic, the test will end early.

“I think the potential for congestion is there, I think the perception is worse than what the reality will be,” Evans said. “We have done some preliminary modeling in partnership with MDOT on this, and it suggested something like a 90 second additional delay is the most you would see getting though this corridor, and that was a worst case scenario.”

While the tests are happening, the road won’t just sit empty. The closed lane will be converted to things like parking spots, a bike lane, bus stops, benches, or other possibilities the city could implement through later development projects.

“The foot traffic on western is really important to us. We love seeing people out and about and coming in to shop or just check out what’s going on,” said Courtney Leibrandt, Co-owner of Vintage Redefined in downtown Muskegon. “It could have the potential to increase foot traffic, we could see more bicycle traffic. I feel like anything that could potentially benefit downtown would be something good to try, so why not try it?”

Before the changes take effect, there is an open house set for Monday, July 25th at the Shoreline Drive Plaza at the VanDyk Mortgage Convention Center from 4pm – 7pm. More information can be found on the City’s website.

A start date for the road diet has not been finalized, input from Monday’s meeting will guide the final decision.

►Make it easy to keep up to date with more stories like this. Download the 13 ON YOUR SIDE app now.