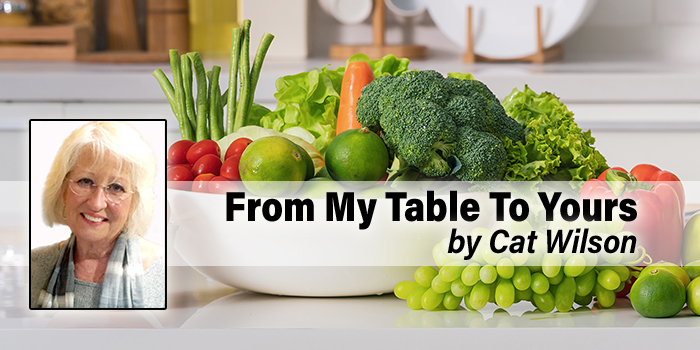 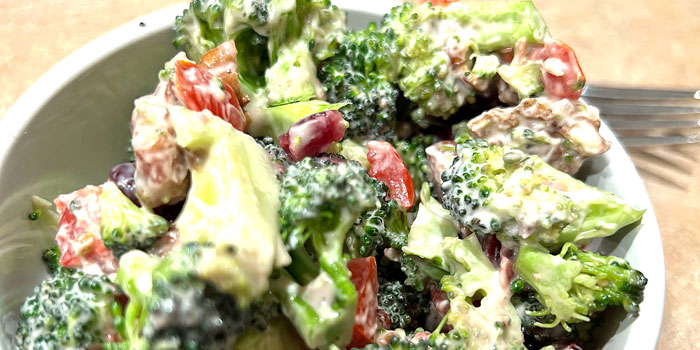 In the quest to eat one pound of cooked veggies and one pound of raw veggies each day, this salad is a total winner.

In my house, we have several go-to side salads that increase our eating of raw vegetables, and I am always scoping out recipes to add to the variety.

I came across a recipe for a Southern broccoli salad in our local paper and decided that with a few modifications I could make a vegan version — and am I ever glad I did. It was delicious, and I have made it twice in eight days. In addition, I am serving it to about 60 people this weekend, and even though the recipe calls for crisp bacon and diced cheddar cheese, I have decided to serve it totally vegan because it is simply awesome without the added ingredients. (Said no bacon lover — ever).

In the quest to eat one pound of cooked veggies and one pound of raw veggies each day, this salad is a total winner. Eating raw vegetables may improve your access to many vitamins, such as water-soluble vitamin C and many of the B vitamins. Heating can kill many enzymes within these plants that may be beneficial for digestion as well, so in the goal of just eating more vegetables, include both raw and cooked, but not overcooked. It’s always about the gut biome.

½ cup rough chopped roasted pecans (I have used raw pecans, now I throw them in a nonstick pan and toast them up and that adds a lovely roast nut flavor that enhances the salad). Seeds could also be added.

Directions: Other than toasting the pecans and the dressing, this is an everybody-in-the-pool recipe.

You will only be using the floret portion of the broccoli cut into bite-sized pieces. Then add quartered tomatoes, cranberries, pecans and pinch of salt and pepper.

For the dressing, mix vegan mayo, apple cider vinegar and sugar. The vegan mayo is a little thinner than traditional mayo and for this salad, that works perfectly to help bring out the flavor of all the other ingredients. Add to salad and mix. You could try plain yogurt if you would rather.

You could eat this right away, but letting it sit in the fridge for a couple of hours helps the vinegar disperse and the flavors meld together.

Cat Wilson lives in South Bend and transitioned from a vegetarian diet to eating a plant-based diet more than two years ago. She may be contacted at [email protected]