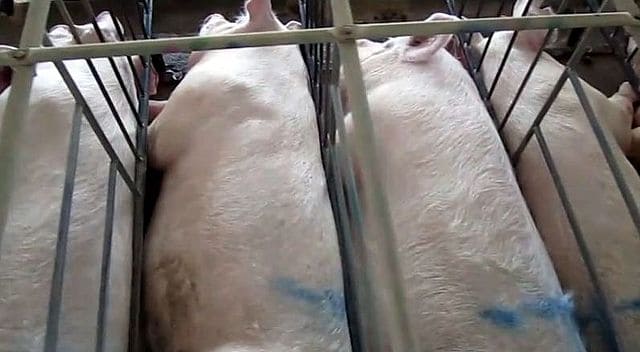 We have seen the issue of gestation crates rise to prominence in recent months, in particular, due to a campaign led by Carl Icahn against Mcdonald’s. The activist investor called for two nominees to be elected to the board of directors to improve the company’s animal welfare standards, but the motion was voted down by shareholders last month. The reason for Icahn’s campaign and the media attention it subsequently garnered is due to McDonald’s failure to make good on its pledge to phase out the use of gestation crates.

The use of gestation crates is a common practice in the pork industry and is used to store farmed sows (female pigs) in small, metal enclosures during pregnancy to save space and reduce intra-species conflict. They are barely larger than the sow’s body, preventing them from moving or turning around. It has become one of the most controversial animal welfare issues in the food sector.

“The public is demanding better conditions for animals”

Gestation crates’ size makes an onlooker squirm:  animals are raised like they’re parked cars, their cages parallel with one another like a large-scale dealership. Such conditions increase abnormal sow behaviour and are bad for their health, having negative repercussions for their cardiac function, bone strength and posture. Moreover, there is evidence these crates increase the risk of stillbirth, which is both an alarming welfare issue and counterintuitive for the producers rearing them in the first place.

The public is demanding better conditions for animals, and the use of gestation crates is changing, albeit slowly.

In the Ctrl, Alt, Meat podcast, Elliot Teperman, Program Manager at the Coller Foundation, speaks about the advancements in animal welfare, most notably the EU’s recent ban on the use of cages and crates, and how this shift is being driven by the consumer. In many Western countries, consumer attitudes toward gestation crates limit their use, and between 1994 and 2018, Sweden, the UK, New Zealand and the EU introduced bans. Despite the US being the third-largest pork producer globally, it does not have a federal ban on crate usage. There are, however, ten states that have chosen to introduce their own bans.

Recent state legislation changes in California, which consumes approximately 14% of the US’ pork, are expected to cause significant financial risks for companies that currently rely on gestation crates as it prevents them from accessing the Californian market. As such, it is likely corporates may change their processing methods in line with legislation amendments.

Rolling with the changes

If pork producers are unprepared for the changes brought about through legislation and activism, they risk falling behind the curve, and it will cost them.  Failure to transition before legislation comes into place means producers risk being excluded from selling into those markets, and the cost of a quick transition would be significantly higher.

In its gestation crates issue briefing, the FAIRR Initiative discusses the risks facing investors. Gestation crates typically last for 25 years, and, given how a collective move away from their use is already happening globally, investors putting money into companies using gestation crates risk them becoming stranded assets before the investment has become profitable. This demonstrates the economic imperative for companies to act now to ease the transition away from crate usage.

Some corporations, either under shareholder pressure or in fear of potential production losses, have pledged to phase down/ out gestation crate usage. While some, like Chipotle and Whole Foods, have successfully eliminated gestation crates from their supply chains, others like Burger King, The Cheesecake Factory and Marriott have made significant progress on their commitments.

Disappointingly, however, the majority of corporations are woefully behind where they need to be. McDonald’s is one of these companies. In 2012 the company pledged to end the use of gestation crates for pregnant pigs by the end of 2022—but according to Icahn, it is not following through on its promise. As it stands, only 60% of its pork is sourced from sows not housed in gestation crates.

Following Icahn’s proxy fight against McDonald’s, Jeremy Coller, founder and chair of the FAIRR Initiative and Chief Investment Officer of Coller Capital said, “It’s not just pigs left with no room for manoeuvre. Policymakers have banned pork reared in gestation crates across the EU and several US states and crate-free pork has become an investment risk for McDonald’s shareholders. Investors are seeing policy-makers increasingly act on environmental, social and governance (ESG) issues in the food sector, and fast-food giants like McDonald’s are failing to progress quickly enough on ESG issues such as gestation crates, emissions and water use.”

Progress is being made, but not fast enough. Individuals, both acting as consumers and citizens, are largely against the use of gestation crates and therefore companies and states alike have a responsibility to care for the animals we are consuming and must act accordingly. As consumers, we must act too – voting with our pockets for those acting for the better.

Katie Briefel is presenter of Ctrl Alt Meat, a weekly podcast produced by the Jeremy Coller Foundation, exploring the issues reshaping the global food business. This monthly column will provide more insights and information on the future of our food systems. Listen to the full episodes of Ctrl Alt Meat, available on Spotify, iTunes and most major podcast platforms.