Steve Kerr Told An Epic Story Of How Toni Kukoc Had A Massive Pre-Game Meal Before His First NBA Game: “In Europe, We Eat A Lot, We Drink A Little Wine… Then We Take A Big Sh*t and We Go Play.” 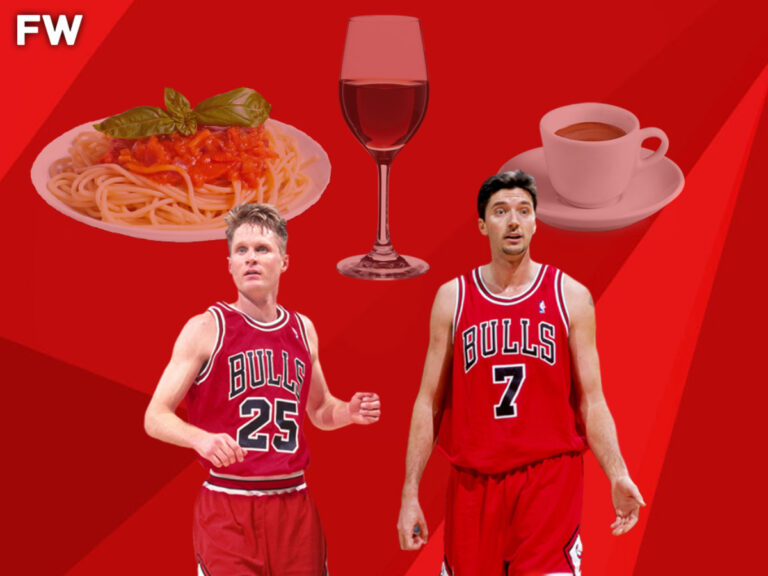 Sports science has reached new heights in the last two decades, with players now having personalized training and diet plans. These advances have changed the game significantly, with players eating specific foods in carefully measured amounts to optimize their performance. But this wasn’t always the case, especially in the NBA.

In the 1980s and 90s, players mostly ate whatever normal people eat, just sometimes in larger amounts. Considering how much work athletes get through physically, it’s not hard to understand why they might need to eat more than most people. And this meant that it wasn’t unheard of for players to go to town on burgers and pasta and pizzas before a game, everyone knows Michael Jordan’s pizza story, after all.

And drinking also was a part of the culture, even during the season. While players today still party and drink now and again, in the 90s, some would have it before games. The best example of this comes from players on the best team in the 90s. Steve Kerr and Toni Kukoc came to the Bulls in 1993 and Kerr told the story of Kukoc’s legendary pre-game meal on ‘NBA TV’s Open Court’ program.

“But I’ll tell you a quick story about Toni Kukoc when he came over to the NBA. In the first game of the season, I asked him if he wanted to go grab a bite to eat. It’s about three o’clock in the afternoon, four hours before the game. He orders this feast—salad, appetizer, huge plate of pasta, chicken, glass of red wine, a dessert like tiramisu and then he follows it up with an espresso. And I’m just in awe.

While this sounds more than a little intense, it’s also a testament to the players of that era who were able to perform at an incredibly high level despite eating like this. Kukoc went on to become a 3-time NBA champion and played 13 seasons in the NBA, so it seems hard to believe. It looks like eating this way actually worked well enough for him.