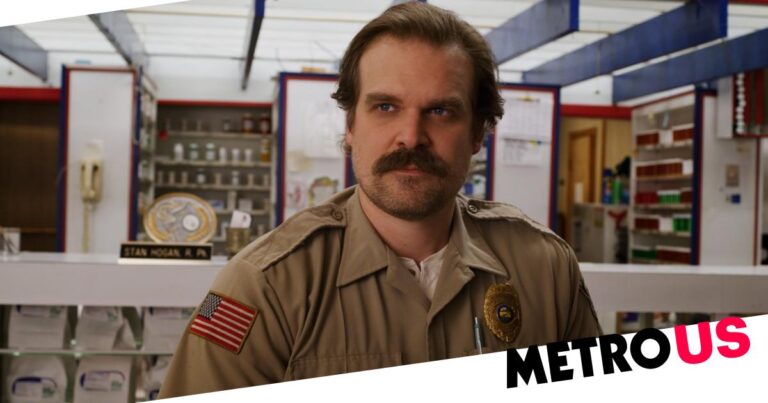 When Stranger Things season 4 came out on Netflix, one of the biggest talking points was David Harbour’s drastic transformation, as his character loses a huge amount of weight while being kept captive as a prisoner in Russia.

Behind the scenes, his 75-pound weight loss was apparently ‘heart-wrenching’ to watch… despite the actor actually appearing ‘really happy’ in real life.

Metro.co.uk recently spoke to Amy L Forsyth, the makeup department head of Stranger Things, and Devin Morales, the co-department head of makeup, who shared a fascinating insight into the work that went into creating the magic that viewers recently witnessed in the latest episodes.

Amy explained how difficult she found it to witness David changing before her eyes, adding that his ‘healthy regimen’ to lose weight actually resulted in the department having more work to make him look as ‘weathered’ as possible, given the ordeal Hopper has been through.

When Hopper takes off his top in front of Joyce Byers (Winona Ryder), fans got to see the extent of the scarring on his body from being tortured and beaten up – but all of that was actually VFX, as the makeup department had issues with prosthetics at customs at the time of filming during the pandemic.

‘But his transformation, seeing it in person, it’s crazy, because I’ve known him for so long,’ Amy said. ‘So seeing him basically wasting away, it was just heart-wrenching to me.’

To view this video please enable JavaScript, and consider upgrading to a web
browser that
supports HTML5
video

Nonetheless, David, 47, was seemingly in good spirits, despite the arduous task of losing the pounds.

‘He seemed like he was really happy. It’s crazy, because he’s doing this to his body so he can realistically perform as Hopper in a Gulag after being there for so long. But because his workout regimen and his nutritional regimen were so healthy, his skin was glowing,’ Amy explained.

‘So we had to do a lot more to pull that back and make him look a little bit more weathered, because I’m like, “Wow, your skin looks great. You look great. You look really happy.” He was just like, “Yeah… I’m hungry. But…”

‘I think he just had to put weight back on for another movie, some Santa Claus movie. It’s quite a thing to do to your body.’

David recently confessed he was struggling to lose the weight again for season five, admitting: ‘All this up and down is not good for the body, and I’ll have to give it up soon.’

Every season of Stranger Things has continued to raised the bar since its premiere in 2016, and the show’s fourth outing definitely did so once again, with the makeup team tasked with creating looks more gruesome than ever.

One such example was in the Russian prison, when Hopper and Joyce come across an officer who’s had his face slashed by a Demogorgon.

Amy revealed that the idea for that particular makeup was originally put forward for the Terminator-like character Grigori (Andrey Ivchenko) at the end of season three, but at the time, the Duffer brothers thought it went ‘way too far’.

Another obstacle they had to face during season four was the creation of the Hawkins lab massacre, when several children are seen bloodied and killed following a rampage by Henry Creel, aka Number One (Jamie Campbell Bower), who went on to become Vecna.

However, the challenges the makeup department dealt with for that sequence might not be for the reason you would expect.

Speaking of the actors who played the children being kept at the lab with Eleven (Millie Bobby Brown), Amy said that they ‘all had fun’, before remembering how after painting ‘eye blood’ on the kids, ‘they would like to pick it off’.

‘We were trying to do everything in a way where it was like, “Okay, these are children, we’re gonna set this look, and we’re gonna hope that it stays the whole day.” And then you would walk up and they’re peeling their stuff off their face, and they’re like, “It’s fun!”. And I was like, “Oh, no, no, no, it’s not fun,”’ she recollected, chuckling.

She added that while they might have had to touch up the child actors’ makeup after they peeled it off, it was ‘better than starting from scratch’, as they had laminated pages on a ring of all of the children, with the eye blood makeup patterns corresponding with each of their numbered character names.

While Amy and Devin had ‘no information’ they could share about season five – which is currently in the process of being written – they emphasised how much bigger the show becomes every time new episodes come out.

‘We were in different locations, different units, so all of that kind of came into play, and then you add Covid on top of that. It was a 20-month long journey that we took together.’

Stranger Things is available to watch on Netflix.

If you’ve got a celebrity story, video or pictures get in touch with the Metro.co.uk entertainment team by emailing us celebtips@metro.co.uk, calling 020 3615 2145 or by visiting our Submit Stuff page – we’d love to hear from you.


MORE : Stranger Things’ David Harbour reveals which song would save him from Vecna


MORE : Stranger Things season 5 will finally reveal ‘what the Upside Down is’